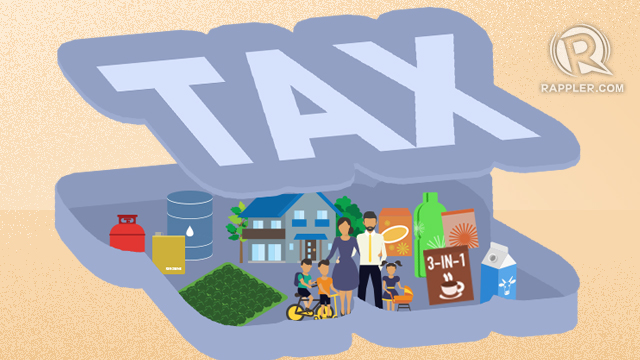 MANILA, Philippines – One of the key promises of President Rodrigo Duterte is an overhaul of the country’s tax code, a key component of his economic program. Duterte had called on the Senate to “support the tax reform in full and to pass it with haste.”

On Wednesday, September 20, the Senate ways and meeans committee filed its version of the bill that seeks to restructure the tax system. The Senate bill, however, differs in some areas from the House tax reform bill passed in May.

While the Senate and House differ on how they want to restructure the country’s tax system, both have said that they guided by one objective: to make taxes “simpler, lower, and fairer” for Filipinos.

Here’s a look at how the two versions differ from each other: 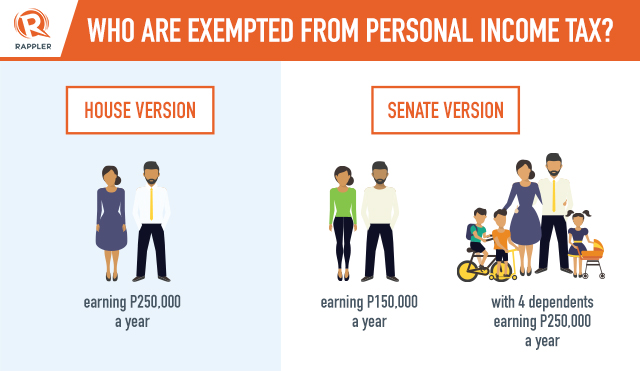 Under the Senate version, those earning P250,000 can still enjoy tax exemption if they have 4 dependents.

The Senate committee highlighted the fact that under its version, “most taxpayers will receive tax relief through lower income tax rates, at least 64% of workers and compensation earners – roughly 3.192 million Filipinos will be exempt from paying income tax.”

The Senate committee, led by Senator Juan Edgardo Angara, said its projection was based on 2014 data from the Department of Finance (DOF). 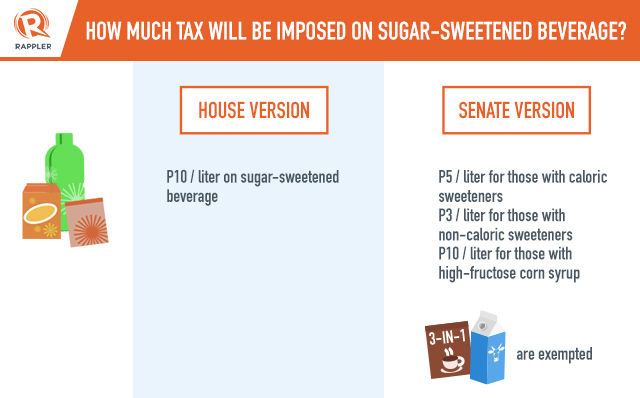 Other than the lower threshold for personal income tax exemption, the Senate panel proposed a two-phased approach on the sugar tax.

After that, the tax will be P0.05 per gram of sugar per drink. The Senate commitee said the “two-phased approach is to give the food and drug administration (FDA) time to build its capacity to implement the proper tax monitoring regime.”

Milk products are exempted from the sweetened beverage tax for their nutritional value, the Senate panel said.

It also exempted 3-in-1 coffee from the sweetened beverage tax, with studies saying that up to 80% of ordinary Filipino households consume instant coffee regularly. 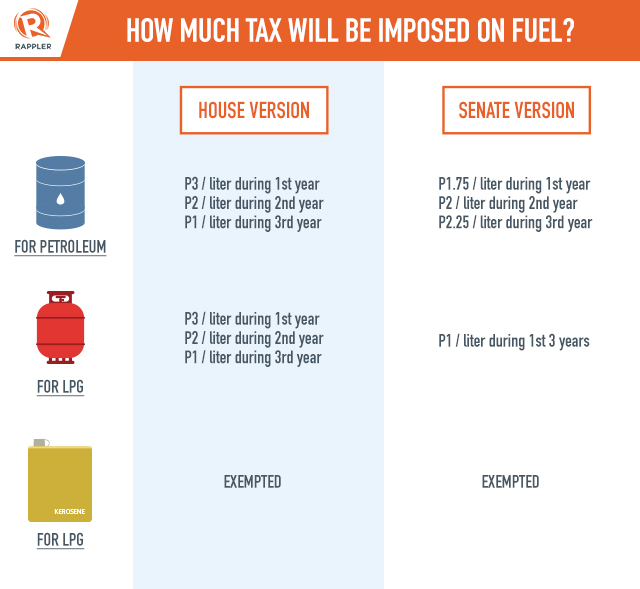 The excise tax on petroleum will remain at P6 per liter for the next 3 years. But the Senate version made the excise tax in the first year lower than the  next two years.  The Senate committee said this gives Filipino families, especially those with lower income, more time to adjust to the increase.

As liquid petroleum gas (LPG) is widely used in households for cooking, the Senate lowered its excise tax, adopting a P1-per-liter excise tax every year in the next 3 years.

The Senate and House agreed to exempt kerosene from the tax increases “given that up to 3 million families use it” daily, according to the DOF.

The Senate commitee, however, said it will lift the tax increases should Philippine inflation exceeds the government’s target and should the world crude prices exceeds $80 per barrel.

Similar to that of the House, the Senate adopted a 5-tier regime for auto excise tax, the committee report read. It said the most expensive cars will be levied the highest rate, while the cheapest ones will receive a marginal hike. 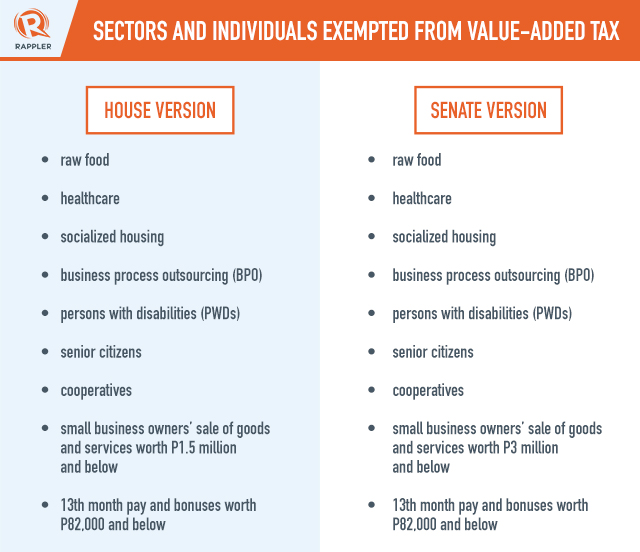 The Senate retained the House’s value added tax (VAT) exemptions on raw food, healthcare, social housing, and other basic needs. It also retained exemptions given to senior citizens, persons with disabilities, cooperatives, and the business process outsourcing industry, among others.

The committee also raised the VAT exempt threshold on the sale of goods and services to P3 million from P1.5 million which, it noted, would help small business owners. 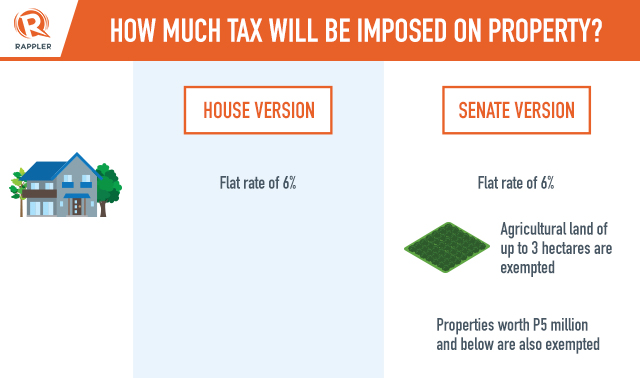 With regards to estate tax, the Senate committee said it replaced the current schedule of rates with a flat 6% tax, the same rate in the House bill.

The bill also set a standard deduction of up to P5 million, which means any net estate valued at P5 million and below can be exempted from taxes, while agricultural lands of up to 3 hectares are also exempted.

It also said families will no longer need to file a notice of death with the Bureau of Internal Revenue within a month of the family member’s death. The Senate committee also said estate taxes can be paid within one year instead of the current 6 months.

The Senate committe said its tax reform version is a product of 19 public hearings, 4 technical working group meetings, and several hours of consultation with experts and stakeholders.

Finance Secretary Carlos Dominguez III lauded Angara and his team for their prompt action and hoped Congress would soon pass the final version so it can be implemented by January 2018.

“We hope the Senate will pass the [bill] on 3rd reading before going into recess in mid-October, the bicameral conference to conclude in November, and the President to sign the bill into law by December 15, 2017. This schedule will allow us to implement the tax reform on January 1,” Dominguez said. – Rappler.com