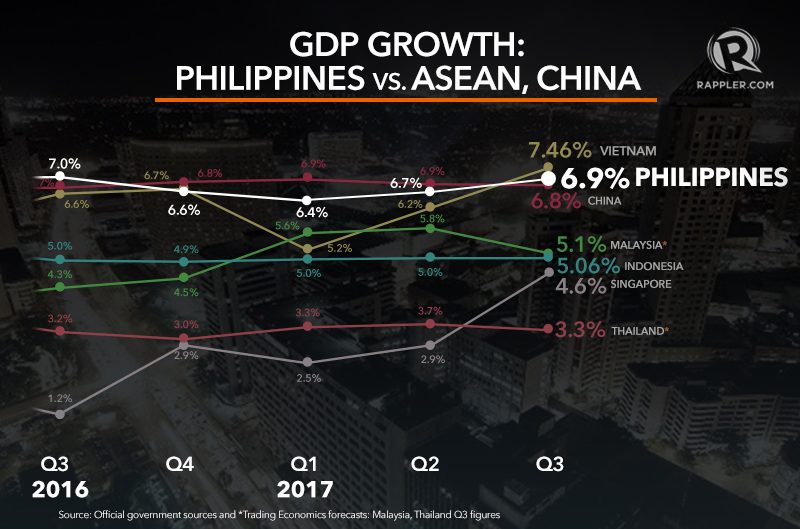 MANILA, Philippines – The Philippines pulled ahead of China in the 3rd quarter of 2017 as the Southeast Asian economy reported growth of 6.9%, slightly faster than the Asian superpower’s 6.8%. (READ: Philippine GDP grows faster than expected by 6.9% in Q3 2017)

China’s economy has been growing at breakneck rates in the past decades, pushing it to become the world’s 2nd largest economy. But under President Xi Jinping, China is bent on prioritizing the quality of development rather than fast economic expansion. (READ: China’s economic growth slows in Q3 but on course to beat target)

On the other hand, the Philippines, once the “Sick Man of Asia,” has been carrying out a series of reforms that have given it momentum to grow at a rapid pace, allowing it to stand out at a time when there was global economic gloom.

Philippine gross domestic product (GDP) has been growing more than 6% for 9 consecutive quarters.

In the past quarters, the Philippines, China, Vietnam, and India have been in the running for the title, “fastest growing economy in the world.”

Among the member countries of the Association of Southeast Asian Nations (ASEAN), Vietnam has been a strong contender. It has been outpacing the Philippines as the best performing economy in the ASEAN regional bloc since the 4th quarter of 2016.

Among the pioneering 5 members of ASEAN, however, the Philippines remains the best performing. ASEAN-5 is composed of Indonesia, Malaysia, the Philippines, Singapore, and Thailand.

Malaysia and Thailand have yet to release their official figures, but estimates put it at 5.1% and 3.3%, respectively.

According to Socioeconomic Planning Secretary Ernesto Pernia, the Philippine economy in the 3rd quarter was boosted mainly by sustained growth in exports, improvement in public spending, as well as high spending on personal services and increase in salaries of government personnel.

This comes despite several slashes to GDP growth forecasts in 2017 by the World Bank, International Monetary Fund (IMF), and rating agency Moody’s in previous months.

“Many were only expecting 6.5% to 6.6%,” Pernia said. Median projections of Bloomberg and Reuters polls saw 6.5% GDP growth in the 3rd quarter of the year.

The Duterte administration aims to reach 7% to 8% growth annually over the next 6 years, with an P8.4-trillion infrastructure plan until 2022 and a tax reform proposal pending at the Senate. – Rappler.com