This was echoed by SEC chairman Teresita Herbosa who said that Viterbo “is prioritizing his medical check-up since he has irregular heartbeat.”

A corporate and tax lawyer by profession, Viterbo was appointed by then President Benigno Aquino III on May 20, 2014, for a 7-year term, or until May 2021.

He entered the workforce as a supervising senior at KPMG Philippines, where he handled corporate and tax matters. (READ: SEC stands firm on decision to strip Rappler’s license)

After two years, Viterbo left the private sector and chose to work for the government as an entry-level legislative-technical staff lawyer in the office of then Senator Manuel Roxas II.

Viterbo then rose through the ranks, becoming chief of the Legislative-Technical Unit, and ultimately, chief of staff or legal counsel. He was also appointed as legal counsel of the Senate committee on trade and commerce. 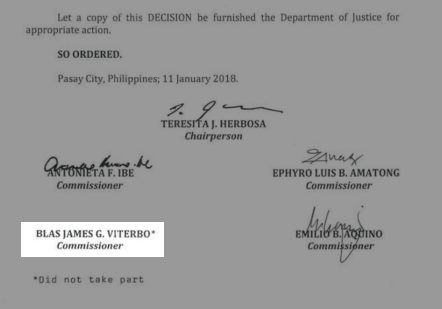 To recall, Viterbo did not take part in the SEC probe into Rappler Incorporated’s alleged violation of the Constitution, which led to the regulator’s decision to revoke the firm’s incorporation papers and declare null and void the Philippine Depositary Receipts (PDRs) issued to Omidyar Network Fund LLC.

Rappler and its parent firm, Rappler Holdings Corporation, on Monday, January 29, filed a petition for review  questioning the revocation of their certificates of incorporation before the Court of Appeals (CA).

Herbosa and Pan were asked about the reason for the non-participation of Viterbo in the SEC decision over Rappler, but they have yet to reply as of posting.

Before joining SEC, the commission disclosed that Viterbo was a director and treasurer of a private corporation with business interests in mass media, power generation, commercial and tourism realty development, among others.

Asked about Viterbo’s replacement, Pan said it is the “President’s prerogative” on who will replace him, citing Securities Regulation Code (SRC) Section 4.

The SRC states that “a commissioner appointed to fill a vacancy occurring prior to the expiration of the term for which his/her predecessor was appointed, shall serve only for the unexpired portion of their terms under Presidential Decree No. 902-A.”

Under the SRC, SEC commissioners must be natural-born citizens of the Philippines, at least 35 years of age, of good moral character or unquestionable integrity, of known probity and patriotism, and with recognized competence in social and economic disciplines.

Viterbo obtained his Bachelor of Laws and Bachelor of Science in Business Administration and Accountancy degrees at the University of the Philippines in Diliman.

He is a recipient of the 2016 UP Virata School of Business Distinguished Alumni Award. Viterbo was also recognized by the UP College of Law for his work and dedication to public service in 2014. – Rappler.com