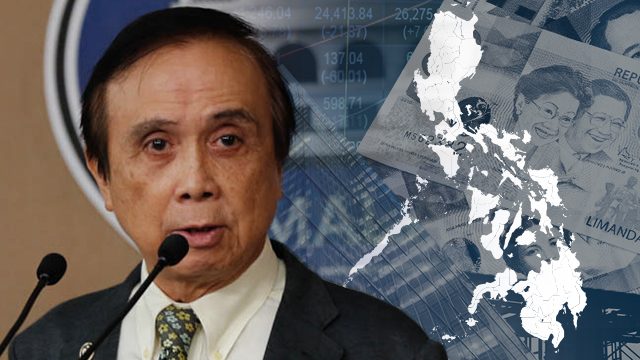 MANILA, Philippines – Socioeconomic Planning Secretary Ernesto Pernia warned of the ill effects of shifting to federalism on the Philippine economy, saying the regions at this point are not ready for this system.

“Expenditure will be immense if we go to federalism, and we estimate that the fiscal deficit to the GDP (gross domestic product) ratio can easily jump to maybe 6% or more, and that’s really going to wreak havoc in terms of our fiscal situation,” Pernia said in an interview with One News’ The Chiefs.

He also added that the expenses would result in a downgrade of the country’s credit ratings. (READ: Additional P44B to P72B needed for federalism shift – gov’t think tank)

“We are now moving to connect the…lagging regions into the mainstream economy and that momentum of infrastructure improvement in the regions is going to be disrupted,” Pernia said. (OPINION: Why federalism won’t necessarily boost regional development)

While he did not categorically state that he is opposing the shift, Pernia cautioned that the government “cannot rush” toward it.

“We really have to do our homework first in terms of preparing well for the country, for the economy,” Pernia added.

Asked if President Rodrigo Duterte is aware of these concerns, Pernia was ambivalent and said economic managers, “are thinking about these concerns, too. It’s a presidential decision.”

The President is expected to formally endorse to Congress the draft charter for a federal government during his 3rd State of the Nation Address on July 23.

The inter-agency Development Budget Coordination Committee (DBCC) has set the deficit cap for 2019 at 3.2% of the country’s GDP.

Other economists have also voiced their concerns about the shift to federalism. University of Asia and the Pacific senior economists Victor Abola and Bernardo Villegas said the country might experience hyperinflation under federalism.

A survey by Pulse Asia showed that majority of Filipinos reject the shift to a federal form of government.