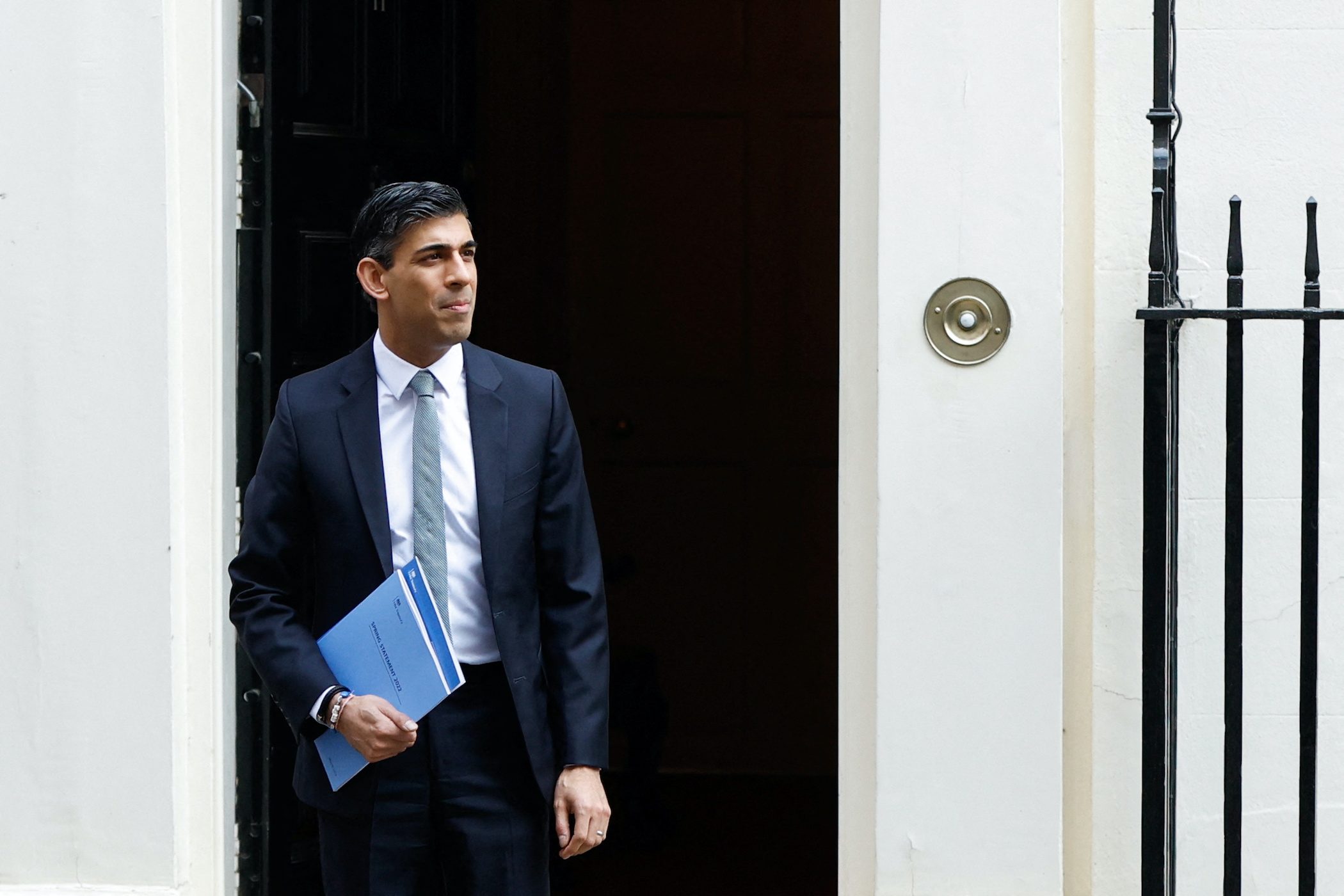 SPRING STATEMENT. British Chancellor of the Exchequer Rishi Sunak leaves Downing Street on the day of the Spring Statement, in London, Britain, March 23, 2022.

LONDON, United Kingdom – British finance minister Rishi Sunak cut fuel duty and softened some of a looming payroll tax increase on Wednesday, March 23, as he sought to alleviate a severe cost-of-living squeeze against the backdrop of slowing economic growth.

But with inflation set to hit a 40-year high of nearly 9% later this year, government forecasters said Britons faced the biggest hit to their living standards since records began in the late 1950s – even after Sunak’s measures.

Announcing a half-yearly budget update overshadowed by the conflict in Ukraine, Sunak set out plans to inject about 17.6 billion pounds ($23.2 billion) into the economy in the coming financial year.

“The invasion of Ukraine presents a risk to our recovery – as it does to countries around the world,” Sunak told parliament.

But many of the factors behind the squeeze on living standards were in place before Russia invaded its neighbor on February 24 in what Moscow calls a “special military operation” to demilitarize Ukraine but which Kyiv and the West say is an unprovoked war of aggression.

Data published earlier on Wednesday showed inflation already at a 30-year high of 6.2% in February.

New forecasts from the Office for Budget Responsibility (OBR) showed the economy set to grow by 3.8% in 2022, much less than the 6% it had projected in October.

A sharp rise in social security contributions remains scheduled to start in April as Sunak seeks to fund more spending on health and social care after the COVID-19 pandemic.

But in an attempt to reduce that hit, he said he would increase the threshold at which workers start to pay the contributions by 2,700 pounds from July, bringing it into line with the income tax system.

“That’s a 6-billion-pound personal tax cut for 30 million people across the United Kingdom,” he said, adding it would save workers more than 330 pounds a year each and was the largest single personal tax cut in a decade.

Fuel duty will be cut by 5 pence a liter for the next 12 months and the main rate of income tax will fall to 19% from 20% in 2024 when Britain is due to hold its next national election.

Other European governments have also responded to the latest surge in energy prices. France, Italy, Sweden, and Spain have moved to subsidize automotive fuel costs. Germany is considering similar plans.

The OBR, which produces the forecasts that underpin the government’s planning, said Sunak was undoing only one-sixth of the tax rises he had previously announced.

Sunak’s measures also provide little help to Britons who are not in work and cannot afford a car, with just 500 million pounds added to a hardship fund administered by municipal authorities.

“This package does next to nothing for those getting hardest-hit by rising prices – those who are disabled and not working just got told they are on their own,” said Torsten Bell, director of the Resolution Foundation think tank.

The OBR’s new budget forecasts show Britain on course to borrow 29 billion pounds less over the next four years than it expected in October, despite a much weaker growth outlook.

Borrowing for the current financial year, which ends on March 31, is due to come in at 128 billion pounds, 55 billion pounds less than forecast in October, largely because tax revenues have been higher than the OBR had anticipated.

The OBR forecasts showed inflation, as measured by the consumer price index, averaging 7.4% in 2022, up from October’s forecast of 4%.

This will push up the cost of servicing government debt, around a quarter of which is inflation-linked, to 83 billion pounds in the coming financial year, a 25-year high as a share of tax revenues, before falling back to historically low levels.