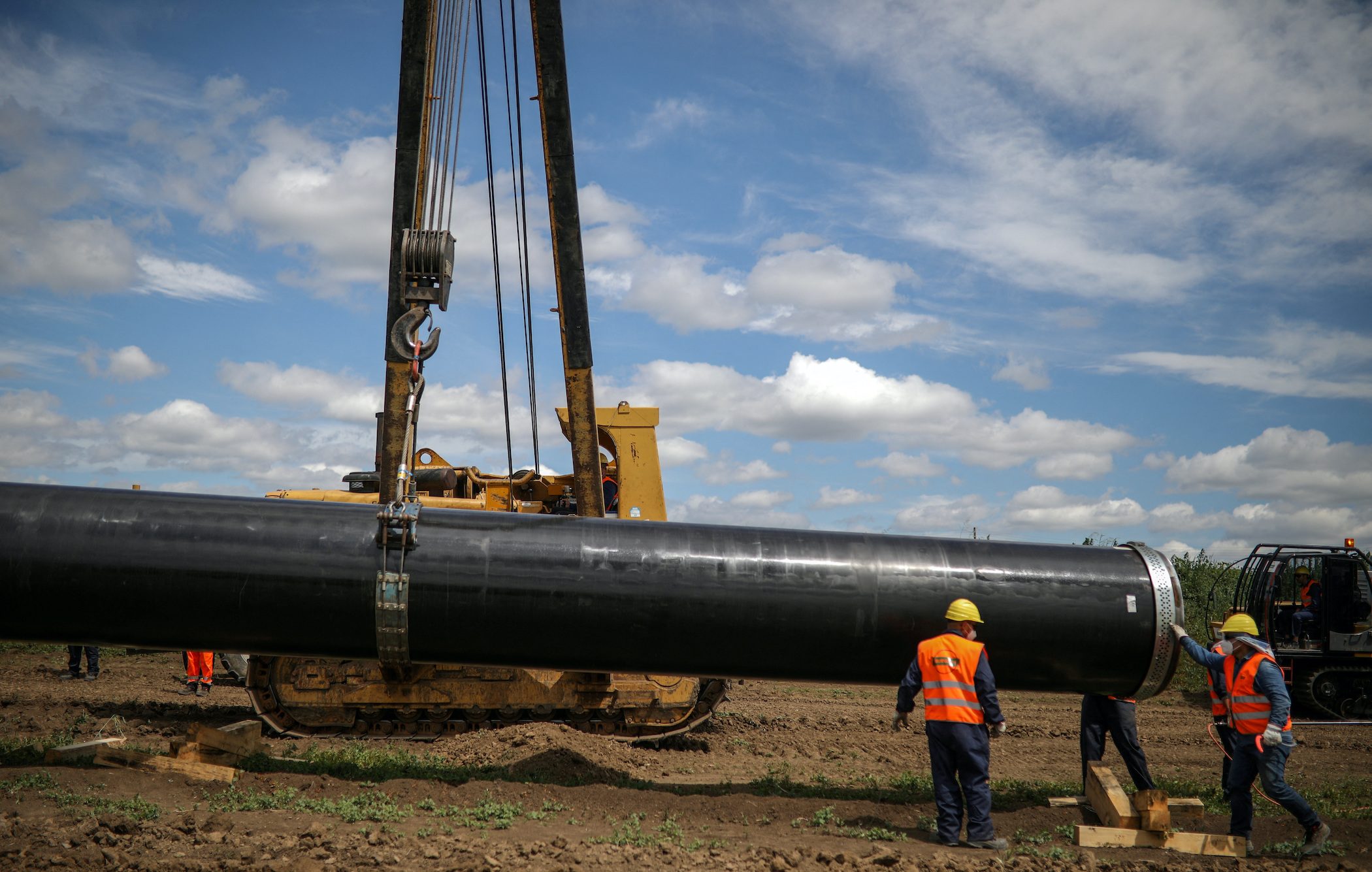 GAS. Workers stand near a pipe at a construction site on the extension of Russia's TurkStream gas pipeline ahead of the visit of Serbia's President Aleksandar Vucic and Bulgaria's Prime Minister Boyko Borissov, in Letnitsa, Bulgaria, June 1, 2020.

Facebook Twitter Copy URL
Copied
Without being specific, Russian President Vladimir Putin has said a gas hub could be set up in Turkey relatively quickly, and predicted customers in Europe would want to sign contracts

MOSCOW, Russia – President Vladimir Putin’s plan to make Turkey a hub for Russian gas in theory could allow Moscow to mask its exports with fuel from other sources, but that might not be enough to persuade Europeans to buy, analysts and sources said.

Russia supplied 40% of the European Union gas market until Moscow on February 24 sent tens of thousands of troops into Ukraine in what it calls a “special military operation.”

Since then, the West has introduced sweeping sanctions, including on Russian oil and gas, cut its purchases of the Russia-sourced fuels and sought alternatives.

After explosions – whose cause is under investigation – damaged the Nord Stream Russian gas pipeline system to Europe under the Baltic Sea, Putin in October proposed setting up a gas hub in Turkey, building on a southern route for exports.

Without being specific, Putin has said a hub could be set up in Turkey relatively quickly, and predicted customers in Europe would want to sign contracts.

So far there have been no public commitments to do so, and analysts say investment as well as time would be needed.

“Does Europe need the project, given the determination of the EU countries to forego Russian gas in the nearest future?” asked Alexei Gromov of the Moscow-based Institute for Energy and Finance Foundation.

He also said it would be impossible to reconfigure gas flows within the European Union, as there are no existing links that would connect to the proposed hub from northwestern Europe, which used to get gas via Nord Stream 1.

Gas and pipeline capacity is however available.

Russia’s exports to Europe have fallen by 43.4% this year and the TurkStream pipeline to Turkey is running well below its 31.5 billion cubic meters (bcm) of annual capacity.

Zongqiang Luo, senior analyst at Rystad Energy, estimated about 60% of pipeline capacity was unusued following exports this year of about 10.6 bcm gas by November 21.

Rystad’s Luo estimated it would take at least three to four years to build the costly new infrastructure needed.

“Even if a new pipeline could be built, then who is going to buy that gas?” he asked.

Others thought buyers would be found.

“That will not be Russian gas, but gas from the hub,” said the source, who did not want to be named due to the sensitivity of the matter.

A trading source in Europe said China, which overtook Japan to become the world’s top importer of liquefied natural gas in 2021, is already reselling Russian LNG, which has not been labeled as “made in Moscow.”

He said it was possible buyers in southern and eastern Europe may not care where the LNG originated.

Noting Europe has not imposed an embargo on Russian gas, in contrast to oil, Alexander Gryaznov, director at S&P Global Ratings, said Europe could be willing to buy from Moscow via mediators.

“Europe is unlikely to want to enter into direct contracts with the Russian Federation, and buying free volumes on the spot market in Turkey will be politically acceptable,” he said, while adding time and money would be needed to set up the hub.

“If the hub started to work, huge possibilities would open up for all sorts of swap operations,” he said.

Putin and Turkish President Tayyip Erdogan have forged close relations in recent years despite a checkered past marred by the murder of Russian Ambassador Andrei Karlov in Ankara in 2016 and Turkey’s downing of a Russian jet on a mission to Syria a year earlier.

Turkey has said it would be also possible to include Trans Anatolian Natural Gas Pipeline (TANAP), which carries Azeri natural gas to the Turkish border, into the proposed hub.

Turkey and Azerbaijan agreed last month to double the capacity of the pipeline from the current 16 bcm “in the short term,” and on November 23 the heads of Russia’s Gazprom and Azeri state energy company Socar, Alexei Miller and Rovshan Najaf, met in Moscow.

Neither Gazprom nor Socar provided details of the meeting but this month, Russia agreed to supply Azerbaijan with 1 bcm of gas under a new short-term contract.

The deal “raised some concerns from the market” about a possible gas swap deal with Russia to export more gas to Europe, said Luo.

With the Turkish gas hub proposal, Russia has returned to a long-standing idea to add two lines to the existing TurkStream pipeline to double its annual capacity to 63 bcm.

That corresponds exactly to the combined volumes Russia sold via various routes to Austria, Bulgaria, Hungary, Italy, Serbia, Slovenia, and Turkey in 2020, according to Gazprom data.

Russia supplies pipeline gas to Europe mainly via Ukraine at a rate of over 40 million cubic meters per day, less than half the amount it used to sell to the European Union.

It also delivers gas to southern end eastern Europe, including Hungary, via the TurkStream.

The existing TurkStream cost $3.2 billion and the never-launched Nord Stream 2 gas pipeline via the Baltic Sea required another $11 billion shared between Gazprom and its western partners.

Neither Gazprom nor the Kremlin provided a cost estimate for the Turkish hub idea. Dmitry Peskov, Kremlin’s spokesman, declined to comment this week when asked by Reuters on a daily conference call how Azeri gas could be used in the hub.

Gazprom and Socar did not reply to Reuters requests for a comment. – Rappler.com