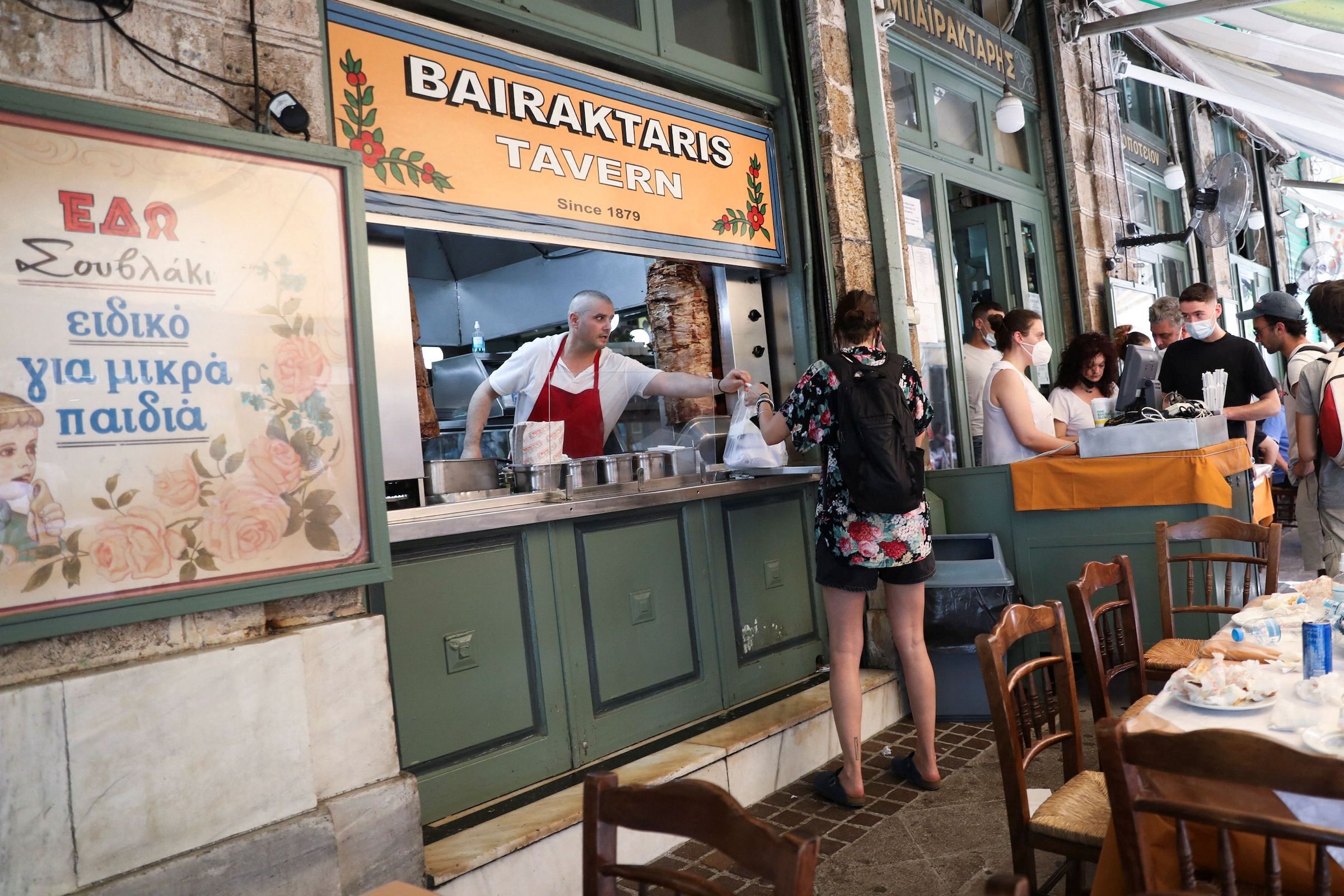 SOUVLAKI. A cook gives a customer a souvlaki, a popular Greek fast food made with pieces of meat grilled on a skewer, in a restaurant in Athens, Greece, May 27, 2022.

ATHENS, Greece – As Greek restaurateurs gear up for the summer season, they are keeping a wary eye on the potentially damaging impact of inflation – amply illustrated by the soaring price of a signature snack popular with both locals and visitors.

Averages prices for souvlaki have risen far faster than headline measures of inflation – hovering at a 28-year high around 10% in Greece – trotted out by national statistics agencies.

The classic meal of grilled meat wrapped in flatbread with salad and garlic yogurt now costs 3.30 euros ($3.55) on average in and around Athens, up an eye-watering 30% from last summer.

With the cost of its main ingredients – meat, vegetables, and sunflower oil – all up sharply along with energy prices as war and pandemic disrupt supply chains, the surge lays bare some of the main pressures facing the world economy at grassroots level.

“The war in Ukraine has affected us a lot,” said 79-year-old Thanasis Golas, owner of one of the oldest kebab shops in Monastiraki district in the shadow of the Acropolis as he sliced off pieces of pork for his mainly foreign clientele.

“Greek customers have been reduced substantially.”

Long seen as an inexpensive treat accessible to almost anyone, souvlaki has increasingly become the kind of item people on tight budgets think twice before buying.

“In the past I would buy three or two souvlaki, today I only bought one, because it is very expensive, and wages are low right now,” says Morina Ntotsi, a 58-year-old cleaner who earns 720 euros a month.

The Grill and Restaurant Union in Athens says that the price of pork has risen 30% the last 12 months, the sunflower oil generally imported from Ukraine by 125%, and electricity bills more than 100%.

“I hope the war ends soon,” said Spyros Bairachtaris, whose family has owned a restaurant near the Acropolis for more than 140 years and who, following a doubling of his electricity bill, is struggling to hold his souvlaki at under 3 euros per serving.

For at least one tourist, however, the snack remains a snip at that price.

“I would pay 10 euros for that souvlaki, it’s delicious,” said Dave Disis, from the US state of Georgia. – Rappler.com