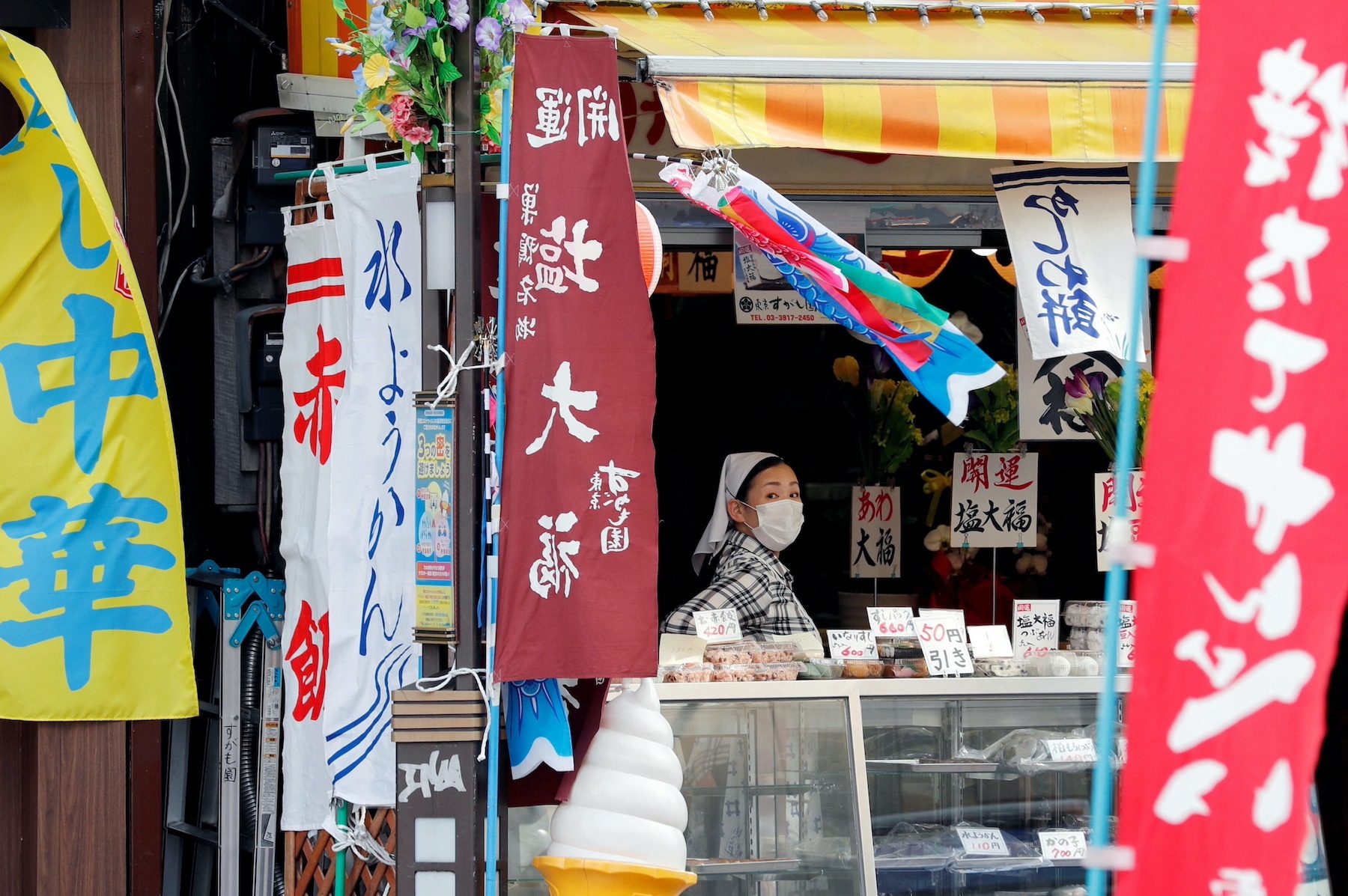 CONSUMPTION. A woman wearing a protective mask waits for customers at a market district in Tokyo, Japan, May 13, 2020.

TOKYO, Japan – Japanese mother of three Maiko Takahashi was never one to pinch pennies or accept hand-me-downs for her children even though circumstances for her single-income family have always been fairly modest.

But times have changed. Nowadays, she has no trouble with used clothes and her pursuit of bargains and scrimping on the most trifling costs borders on the obsessive.

“I’ve started to pay close attention to tips on TV shows, like minimizing the number of times you open the fridge to save electricity,” said Takahashi, whose family of five lives in suburbs north of Tokyo.

“We’ve started to feel the pinch going about things the usual way so I’ve made adjustments.”

Takahashi’s behavior is mirrored by a growing number of consumers and underlines a worrying trend for Japan.

After lifting two years of on-and-off coronavirus curbs in March, the government was counting on what’s known as “revenge spending,” pent-up demand triggering a splurge that boosts consumption and a moribund economy, as has been seen in the United States, China, and some other major economies.

But with energy, food, and other living costs soaring – exacerbated in recent months by a sharp decline in the yen and the war in Ukraine – those hopes are fading fast.

Facing the prospect of struggling with rising prices, Japan’s famously thrifty consumers are tightening their belts even as they sit on the remains of an estimated 50 trillion yen ($383 billion) – equivalent to 9% of the economy – in “forced savings,” as the Bank of Japan calls it, accrued during the pandemic.

Some bigger companies have answered a government call to raise wages but the gains of some 2% will be swallowed up by higher prices of everything from flour to diapers and beer, economists say.

In March, electricity prices in resources-poor Japan jumped 22% from the previous year – the most in more than four decades.

The government recently upgraded its assessment of the economy for the first time in four months, citing an expected recovery in spending, but added a caveat that the outlook was clouded.

“The chance of a ‘revenge spending’ burst is becoming smaller than we had expected,” a government official said in unusually candid remarks, noting that prospects were especially uncertain beyond the summer. With more than 90% of consumers saying in the latest government survey that they expected everyday goods to become more expensive over the next 12 months, economists say it is no surprise to see behavior like Takahashi’s.

In addition to accepting used uniforms for her son entering kindergarten, and venturing further in search of discounts, the stay-at-home mom said she has switched to lower-cost private brands (PB) for mayonnaise, ketchup, and other food.

She’s not alone. The share of so-called PB items for mayonnaise purchases nationwide rose to 22% in March from 18% a year earlier, according to market research firm Intage.

The “Golden Week” holiday, which began on Friday, April 29, is the first in three years without COVID-19 restrictions, and the economy should see a dramatic improvement in spending but that is likely to be the high point for consumption this year, said Daiwa Securities senior economist Toru Suehiro.

“The full-fledged impact of rising costs will emerge in the July-September quarter and later, so the Golden Week will probably be the last feast of the year,” he said.

The number of holiday travelers is expected to grow about 70% from last year, but still a third short of pre-pandemic levels, according to JTB, Japan’s biggest travel agency.

The yen’s fall to two-decade lows would normally be a boon for inbound travelers, but Japan, fearing COVID-19, has kept its borders closed to tourists. In 2019, almost 32 million foreign tourists contributed to the economy.

Meanwhile, the weak yen has caused pain for many companies by increasing input costs, making them just as cautious as consumers – and reluctant to raise wages.

“Prices keep rising and rising for items we can’t live without, while salaries are flat,” Takahashi said.

“I’m constantly racking my brains over what I can skimp on next.” – Rappler.com