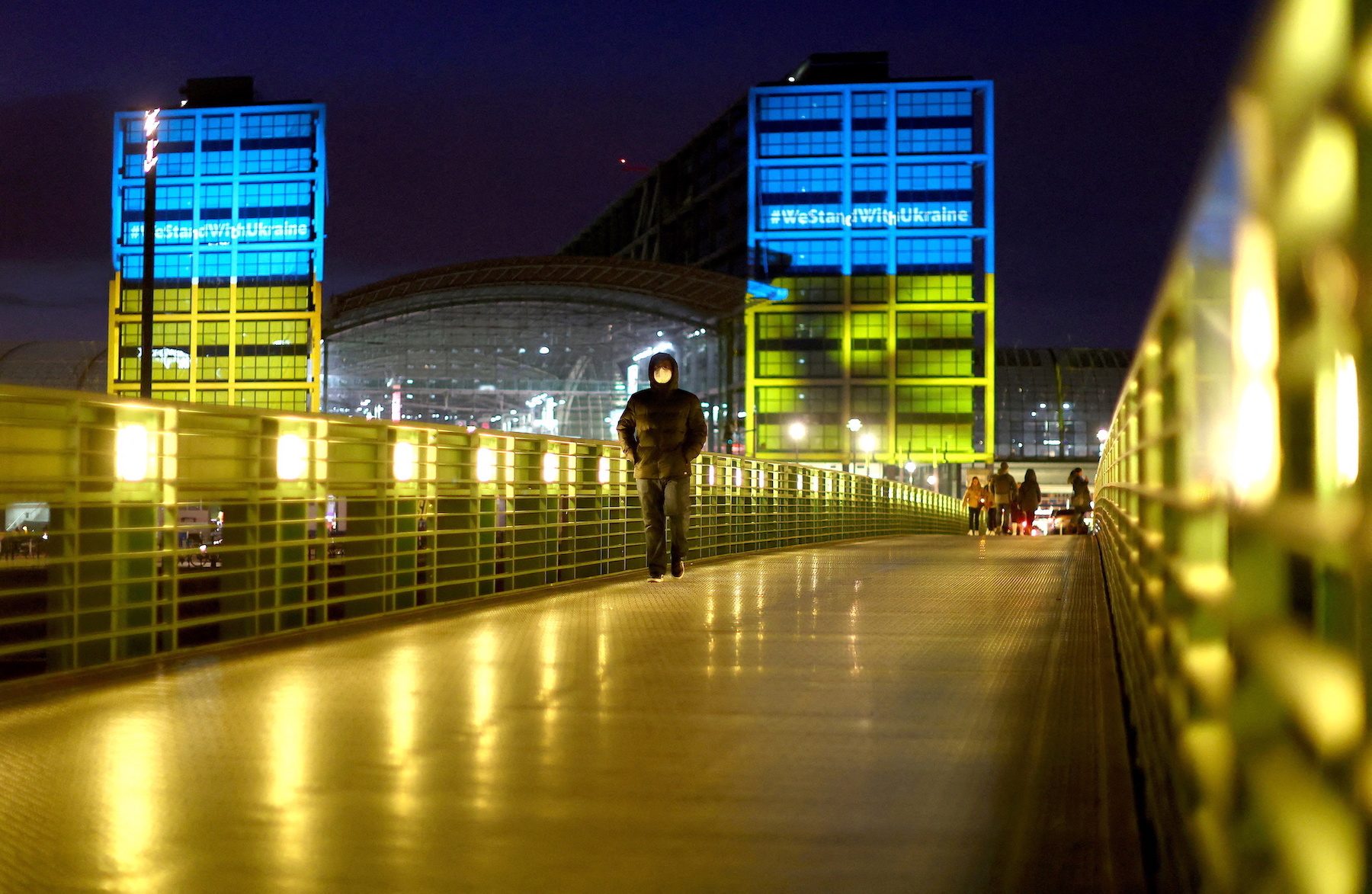 SUPPORT. A person walks on a bridge near the facade of the main train station in Berlin, Germany, illuminated in the colors of Ukraine's flag in support of its people, March 5, 2022.

WASHINGTON, USA – The International Monetary Fund (IMF) on Saturday, March 5, said it expected to bring Ukraine’s request for $1.4 billion in emergency financing to its board for approval as early as next week and was in talks about funding options with authorities in neighboring Moldova.

In a statement, the global lender said the war in Ukraine was already driving energy and grain prices higher, and had sent a wave of more than 1 million refugees to neighboring countries, while triggering unprecedented sanctions on Russia.

“While the situation remains highly fluid and the outlook is subject to extraordinary uncertainty, the economic consequences are already very serious,” the IMF said in a statement after a board meeting chaired by Managing Director Kristalina Georgieva.

“The ongoing war and associated sanctions will also have a severe impact on the global economy,” it warned, noting that the crisis was creating an adverse shock to inflation and economic activity at a time when price pressures were already high.

It said price shocks would be felt worldwide, and authorities should provide fiscal support for poor households for whom food and fuel made up a higher proportion of expenses, adding that the economic damage would increase if the war escalated.

Sweeping sanctions imposed on Russia by the United States, European countries, and others would also have “a substantial impact on the global economy and financial markets, with significant spillovers to other countries.” In addition to the human toll, Ukraine was experiencing substantial economic damage, with seaports and airports closed and damaged, and many roads and bridges damaged or destroyed.

“While it is very difficult to assess financing needs precisely at this stage, it is already clear that Ukraine will face significant recovery and reconstruction costs,” it said.

The board was expected to consider Ukraine’s request for $1.4 billion in emergency financing as early as next week. Ukraine also has $2.2 billion available through June under an existing stand-by arrangement, the IMF said last week.

Moldova and other countries with close economic ties to Ukraine and Russia were at “particular risk” of scarcity and supply disruptions, the IMF said.

It said IMF staff were actively discussing funding options with Moldova, which has requested an augmentation and rephasing of its existing $558-million IMF loan program to help meet the costs of the current crisis. – Rappler.com