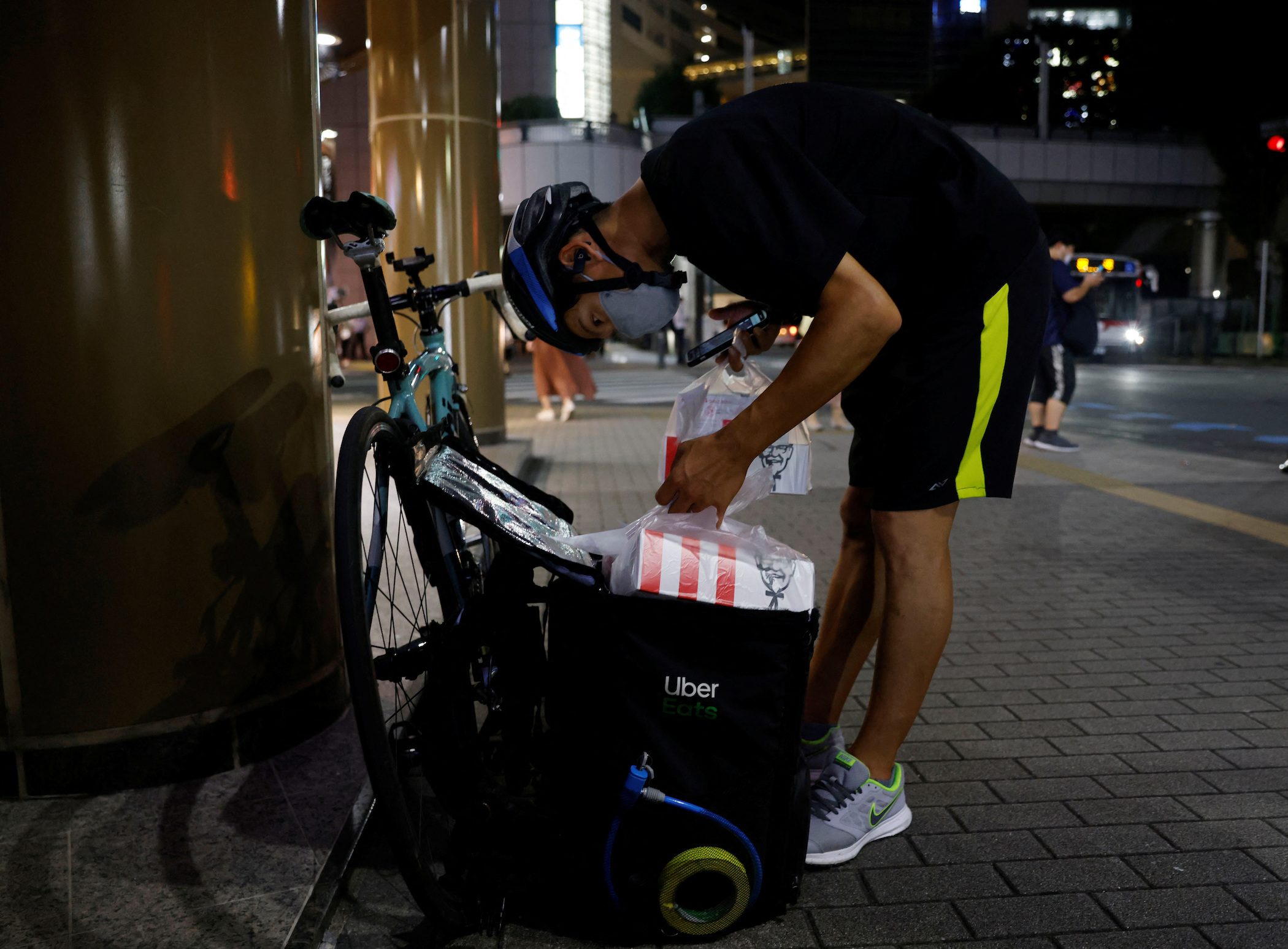 SIDE HUSTLE. Riku Omori holds takeaway bags as he works for a food delivery service after finishing his regular job in Kawasaki, south of Tokyo, Japan, August 31, 2022.

Facebook Twitter Copy URL
Copied
The emergence of the freelance class poses a challenge to Prime Minister Fumio Kishida who has pledged to redistribute wealth through wage hikes, which have up until now eluded Japan

TOKYO, Japan – When Riku Omori’s pay at his regular job was slashed by a third, he found temporary work delivering fried chicken and Thai food on his bike on the streets of Kawasaki, south of Tokyo, as a way to supplement his reduced earnings.

The extra 100,000 yen ($722) 26-year-old Omori gets a month helps support his wife and newborn son, which would have been difficult on the 160,000 yen he takes home monthly from his main job at a moving services company.

But it adds a level of financial uncertainty that makes week-to-week living in hard Japan, an affluent nation otherwise well regarded for its egalitarianism.

“The main issue about being freelance is family worries. Your wage will go to nothing if there’s no work,” said Omori, adding that he would have preferred working for a single employer that guarantees a minimum income.

Omori is among a hard-to-track group of people who take up freelance work to make ends meet, often doing jobs that fall outside the scope of the labor laws that guarantee a minimum wage and social security.

This work ranges from meal delivery and reception work at discount hotels to music teaching, futon sales, and toilet maintenance in a country where lifetime employment was once a norm.

The emergence of the freelance class poses a challenge to Prime Minister Fumio Kishida who has pledged to redistribute wealth through wage hikes, which have up until now eluded Japan despite a chronic labor shortage.

Japan’s most recent jobless rate of 2.6% in July was among the lowest in 38 member nations of the Organisation for Economic Co-operation and Development (OECD), slightly above rates reported by Switzerland and Denmark recently.

About 38% of the 57.1 million employed workers in the world’s third largest economy were temporary employees, government data showed, who do not enjoy the same benefits as those on permanent contracts.

As the economy slows, firms are cutting costs by filling openings with low-paid or gig workers, instead of higher-paid permanent employees, analysts and freelance workers say.

“There will be more and more people who can’t get by on their wage even though they’re employed,” said Toshiaki Tsuchiya, 46, a founding member of a freelance labor union.

More people will do side gigs that provide little of the security and stability that regular employment brings, added Tsuchiya, who earns about a fifth of his income delivering food in his extra hours.

“They’ll have no choice but to work like workers.”

Wakita expects the number of people who struggled with serious job-related problems to rise due to the prevalence of gig work.

“In reality, workers should be protected, but they aren’t treated as such,” he said, adding that Japan’s unions have failed to address the plight of non-regular workers.

As part of its attempt to regulate the gig economy, the government has sought to estimate the number of people doing freelance jobs.

There were 4.6 million people engaged in freelance work as their main job or on the side, according to a government survey from May 2020, which it also cited in its key annual policy framework released in June.

About 63% of those were dissatisfied with their incomes, nearly double those who were “satisfied” or “extremely satisfied” with it, the survey showed.

The rise of gig work isn’t all gloom.

A government pledge to draw up a plan to increase the number of startup firms tenfold within the next five years may also lead to benefits – such as subsidies – for entrepreneurs choosing to work with freelancers, they said.

The government has said it would consider expanding the eligibility of social security to freelance and gig workers.

It also pledged in June to set out laws clarifying contract terms between firms that work with freelance workers.

A benefit of freelance work was that the income earned with it was likely to rise in line with skill, Omori said.

“As a freelance worker, the more I work, the more I get paid when I do my best,” he said. – Rappler.com