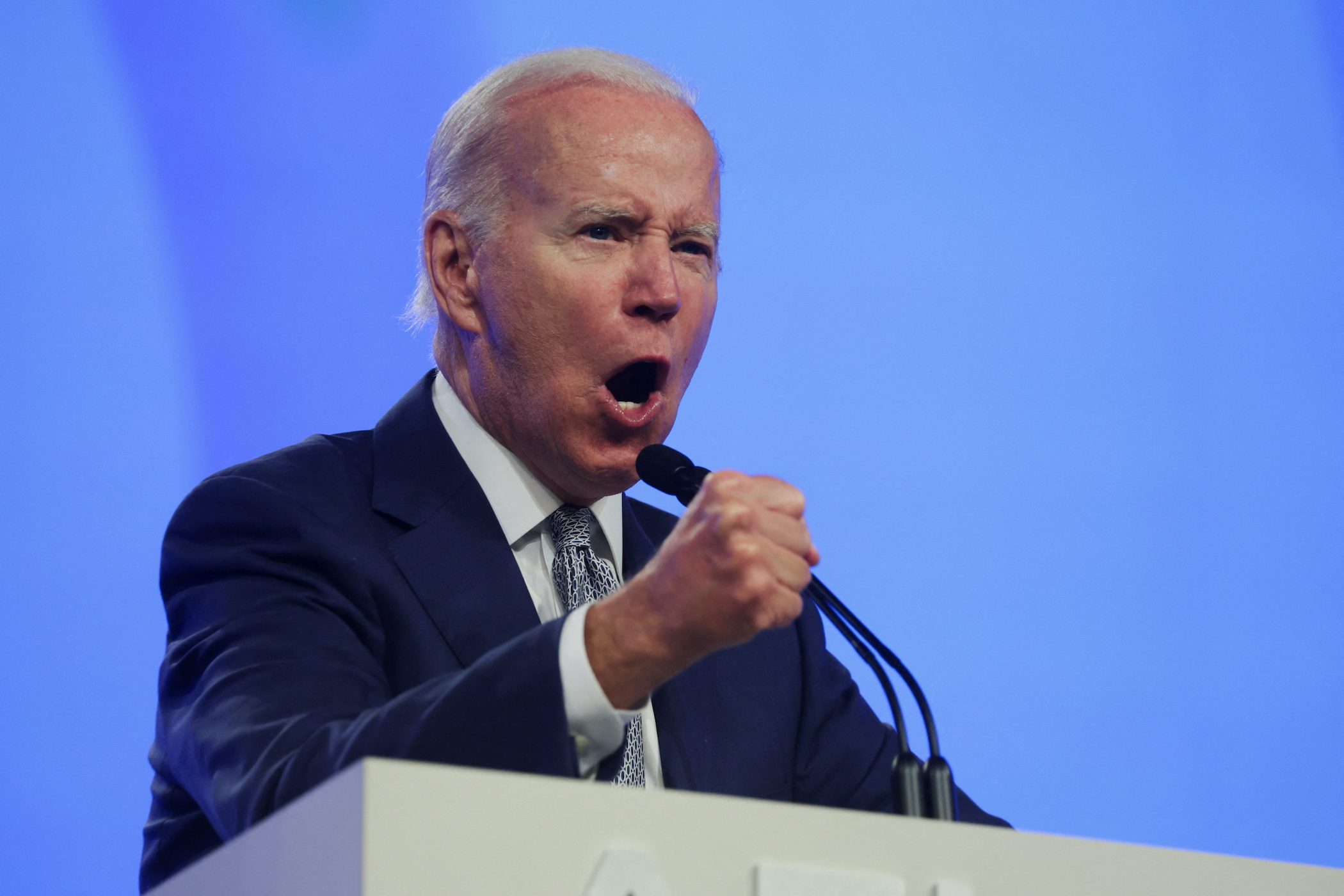 Facebook Twitter Copy URL
Copied
'America still has a choice to make – a choice between a government by the few for the few or a government for all of us,' says US President Joe Biden

PHILADELPHIA, USA – US President Joe Biden blasted Wall Street and Republicans, while making a full-throated defense of his economic plans to thousands of union members in Philadelphia on Tuesday, June 14, as he seeks to improve dismal approval ratings amid high inflation and fears of recession.

Often raising his voice to a yell, Biden vowed to continue to pursue billionaires and corporations that his administration says underpay billions of dollars in taxes each year, and to pursue economic policies aimed at shrinking US inequality.

Worries that a hawkish Federal Reserve will hurt US growth as it attempts to tame inflation helped drive the benchmark S&P 500 into a “bear market” on Monday, June 13, which could beckon a recession, some analysts say.

Wall Street swung between green and red Tuesday after a smaller-than-expected jump in core producer prices for May.

Corporate executives including JPMorgan chief executive Jamie Dimon have warned in recent weeks that they see an economic storm brewing in the United States, as high inflation bites and the Fed balances curbing spending while avoiding recession.

Biden appeared to take aim at those concerns Tuesday.

“Wall Street didn’t build this country, the middle class built this country,” Biden said, adding that if investment bankers went on strike, not much would happen to the US economy.

“Soaring inflation, record gas prices, and a baby formula shortage are only a few of the crises he’s dealt” Pennsylvania families, Republican National Committee Ronna McDaniel said in a statement ahead of Biden’s speech.

Biden and Democrats point to record-low unemployment, small business startups, and wage growth, particularly for low-income workers disproportionately hurt by pandemic shutdowns, as signs the US economy is strong.

“I don’t want to hear any more of these lies about reckless spending. We are changing people’s lives,” he said, saying multiple times that he was cutting deficits in contrast to his predecessor Donald Trump.

The Congressional Budget Office last month forecast that the US budget deficit would shrink dramatically to $1.036 trillion for fiscal year 2022 from $2.775 trillion last year given a recovery-fueled surge in revenues and lower outlays.

Biden spoke in front of about 2,000 union members, leaders, and state and local officials at the AFL-CIO Constitutional Convention, which is held every four years, and where labor leaders chart strategy. The labor federation comprises 57 affiliated unions and 12.5 million workers.

He recalled food lines and job losses under Trump and sparked by the COVID-19 pandemic, and noted record low unemployment.

“Talk about a contrast. Ordinary people waiting in line for an hour for a box of food,” while presidential policies created more billionaires than ever in American history, he said.

Biden, hailed as a pro-union president by labor leaders, has continued to throw his support behind unions and collective bargaining, and the White House is counting on unions to help Democrats win in the November midterms.

He called on union members to throw their support behind John Fetterman, the Pennsylvania US Senate candidate, and Stacey Abrams, who is running for governor in Georgia.

Support from unions was key to Biden’s win in key swing states in the 2020 election. Biden won 57% of union households nationwide compared with 40% for Trump, according to Edison Research.

More recently, Biden met with a new generation of union organizers at the White House, warned major businesses that their workforces would seek to unionize with his support, and has supported a push on Capitol Hill that allows for congressional staffers to unionize.