Facebook Twitter Copy URL
Copied
'I believe that President Marcos is a very firm leader. There’s no such thing as palakasan here,' says Joey Concepcion, the council's lead on jobs

MANILA, Philippines – A member of President Ferdinand Marcos Jr.’s Private Sector Advisory Council sought to give assurances that the creation of the group would not lead to favoritism of certain companies or the crony capitalism that had aided massive corruption during the administration of the Chief Executive’s late father and namesake. 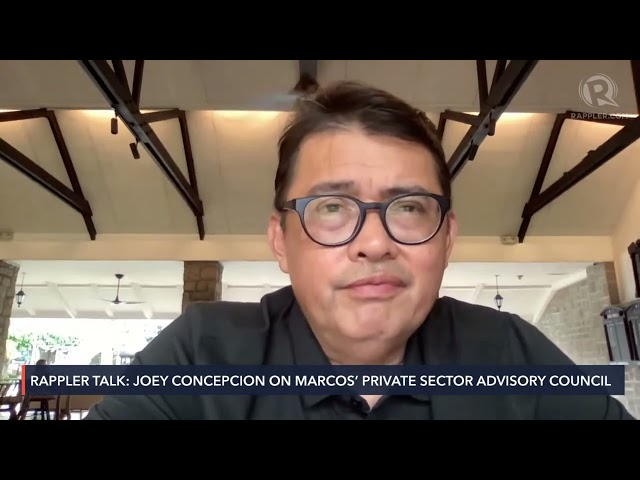 Go Negosyo founder Joey Concepcion, the council’s lead on jobs, was asked during a Rappler Talk interview on Thursday, July 14, if the public had anything to fear from the group in terms of undue favors granted to businesses represented by its members.

“I don’t think so. I believe that President Marcos is a very firm leader. There’s no such thing as palakasan (contest of strength or connections) here,” said Concepcion.

Sabin Aboitiz, the council’s leader and chief executive officer of the Aboitiz Group, was one of the corporate executives seen at Marcos’ victory party in May. Aileen Uygongco-Ongkauko, the council’s sector lead for agriculture, is president of La Filipina Uy Gongco Corporation but also connected to the Aboitizes having served as director of Aboitiz Equity Ventures International and Aboitiz Power International, among other companies.

Aside from Concepcion, the two other sector leads of the council are UnionBank chief technology and operations officer Henry Aguda (lead for digital Infrastructure) and Ayala Healthcare president Paolo Borromeo (lead for healthcare).

‘Not a midnight Cabinet’

Concepcion described the council as an “informal” group for now. He was told by Aboitiz that they would have regular meetings with Marcos but the frequency of these meetings was not specified to him.

The group started to form in the days after Marcos’ electoral victory. He got the call asking him to be part of the group in mid-May and was told it would have an “advisory” function. The group would just be an opportunity for business groups and private sector to share their “views, opinions, and pain points.”

“It’s very structured. We’re not going to be there for long hours. This is not something like a midnight Cabinet or anything like this. We’re all very professional. And we’ve gone through this. I’m glad that President Marcos has really the foresight to really engage with the private sector,” said Concepcion.

The five pillars, represented by the sector leads, indicate the areas Marcos deems important. The group, through the work of the leads, is supposed to “complement” the work of the Cabinet secretaries most involved in their sectors, said Concepcion.

“We’re looking at being advised by some consultancy firms like McKinsey is one of those who have offered for free. And I have Josephine Romero who works with me in Go Negosyo as my advisor who runs all programs like this. Even as we speak, I’m meeting with many people,” said Concepcion.

What is crony capitalism?

During the dictatorship of Ferdinand Marcos, businessmen close to the strongman had been given control of businesses or monopoly in key economic sectors. Friends were given special privileges that allowed them to amass great wealth or used as dummies or fronts for Marcos and his family when making big purchases abroad. Chief among these cronies were the late Eduardo Cojuangco Jr. who ended up controlling the coconut industry, Roberto Benedicto who took charge of the sugar industry, and Antonio Floirendo Sr. who became a banana magnate during the Marcos regime.

Crony capitalism had been blamed by certain groups for contributing to the economic crises during the Marcos dictatorship because it destroyed the concept of free enterprise and discouraged potential investors who would have to compete against cronies given perks and access.

At the start of the Duterte administration, Rodrigo Duterte also benefited from recommendations of the private sector, but through the efforts of his finance secretary, Carlos “Sonny” Dominguez III.

Dominguez and the rest of the Cabinet economic team had carried out a series of consultations with business groups and came up with a “10-point wishlist” they presented to Duterte. The recommendations would eventually become Duterte’s economic agenda. – Rappler.com