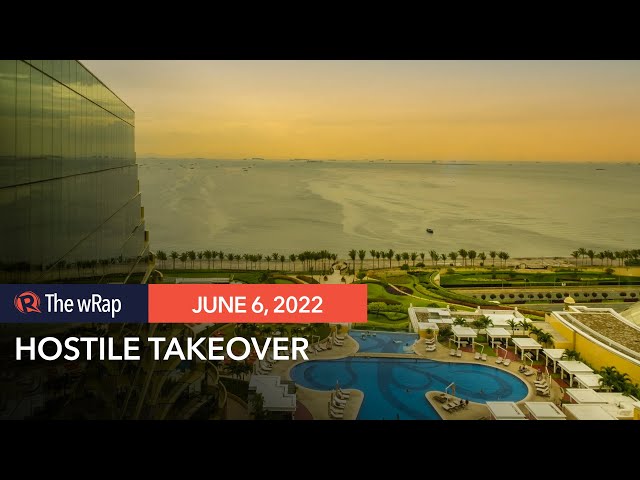 MANILA, Philippines – Directors of the parent company of Okada Manila filed criminal complaints against Japanese tycoon Kazuo Okada and several others over the recent hostile takeover and scuffle in the luxury casino.

On Monday, June 6, directors of Tiger Resort Leisure and Entertainment Incorporated (TRLEI), the operator of Okada Manila, filed kidnapping, serious illegal detention, grave coercion, and unjust vexation complaints before the Department of Justice (DOJ) against Okada, Antonio “Tonyboy” Cojuangco, five other company board members, and at least 14 others.

Hajime Tokuda, director of Universal Entertainment Corporation, the parent company of Tiger Resort Asia Limited (TRAL) and owner of TRLEI, said he was “manhandled” out of Okada Manila and taken to an unknown car.

“Inside the car, there were two security guards beside me. I felt like I was a criminal surrounded by officers – just like in TV. I didn’t know where they will bring me. They were talking, but because I cannot speak English very well, I did not understand them,” Tokuda said in a statement.

He added that they were driven around before being brought back home.

Last Tuesday, May 31, the camp of Okada and Cojuangco, which comprised “at least” 50 private guards and policemen, stormed Okada Manila to enforce a status quo ante order (SQAO) issued by the Supreme Court (SC) last April, which is said to restore Okada as chief executive officer, chairman, director, and stockholder of TRLEI.

In 2017, Okada was booted out of TRLEI over alleged misuse of funds.

Satate, however, insisted that the other companies which own Okada Manila do not recognize the gaming tycoon’s “sham board.”

“Today, we would also like to give emphasis to the legality of the board recognized by TRLEI’s parent companies. We are recognized by our parent companies, Universal Entertainment Corporation and Tiger Resort Asia Limited, as the true and legitimate board members of TRLEI,” Satate said in a press briefing.

Rappler asked Okada Manila for comment, but has yet to get a response.

Estrella Elamparo, lawyer of the deposed TRLEI board, said the new complaints do not impact the SQAO used by Okada for the takeover.

“This is us seeking justice for the violence they perpetuated…. They may be in control right now, but they will have to account for their actions,” Elamparo said.

Okada’s camp is using this dispositive portion of the SQAO for their claim: “NOW, THEREFORE, effective immediately and continuing until further orders from this Court, You, petitioner and respondents, your agents, representatives, or persons acting in your place or stead, are hereby required to observe the status quo prevailing prior to petitioner’s removal as stockholder, director, chairman, and CEO of Tiger Resort Leisure and Entertainment, Inc. (TRLEI) in 2017.”

But Elamparo insisted that Okada “perverted” the SQAO of the SC, noting that it only pertains to the status quo in 2017, where Okada had only one share.

On top of his single share, Okada was elected as chair of the company by being nominated as a representative of TRAL through a deed of trust.

But TRAL has since revoked this, making Okada ineligible to hold a position.

“TRAL has not authorized Mr. Kazuo Okada to vote the shares of stock of TRAL in TRLEI, nor represent TRAL in TRLEI’s meetings, nor in any manner act on behalf of TRAL,” a certification of the company read.

Moreover, TRAL was not a party to Okada’s complaint, according to Elamparo.

“Instead of going to court to question or file an election contest, he did not file anything. Last May, they asked the SC for access [inside the hotel], which means they needed an additional order [and not just the current SQAO],” the lawyer said.

Elamparo said they will seek clarity before the SC regarding the effect of the SQAO.

In 2018, Cojuangco and Okada were on opposing sides, as the former welcomed the decision of the DOJ to indict the latter for alleged embezzlement of more than $3 million in funds.

“The DOJ decision brings us one step closer to disentangling the shareholder disputes in the Okada group, hence allowing the company to run its business with utmost efficiency,” Cojuangco said in a Philippine Star report.

The Court of Appeals cleared Okada in December 2021, saying that a lower court “acted with grave abuse of discretion” because the case lacked probable cause.

When asked about the relationship between Okada and Cojuangco, Elamparo said: “When interests collide, new partnerships are formed. Cojuangco is no longer connected with TRLEI…. These people have an axe to grind against TRLEI.”

Takako Okada, the estranged wife of Kazuo and director of TRAL, condemned the “violent acts” led by her husband.

“I am hopeful that the Philippine government will not allow such dangerous acts. I fear situations like this will not create a friendly environment for foreign investors,” she said.

Tomohiro Okada, son of Kazuo, sided with his mother. Tomohiro is the majority shareholder of Okada Holdings, the ultimate parent of all the companies that own Okada Manila. – Rappler.com