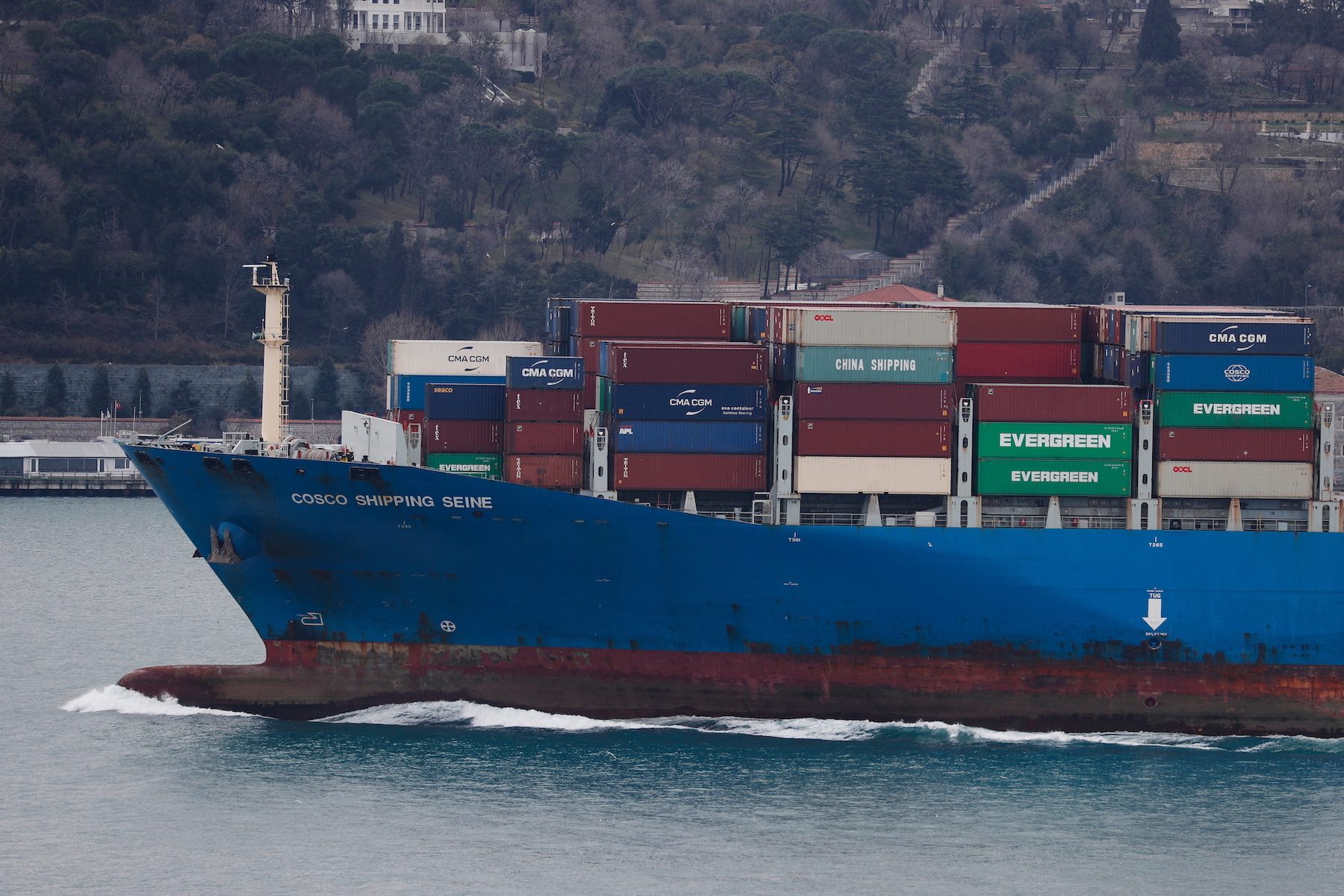 CARGO. The Cosco Shipping Seine, China Ocean Shipping Company's container ship, sails in the Bosphorus, on its way to the Black Sea, in Istanbul, Turkey, March 3, 2022.

Facebook Twitter Copy URL
Copied
Overall Russian import volumes for the week of March 2 to 8 have dropped 40% from the week of February 16 to 22, according to data from supply-chain tracking platform FourKites

The world’s biggest foreign container lines – including the top three MSC, Maersk, CMA CGM, and others such as Hapag Lloyd – have suspended cargo shipments to and from Russia, while multiple companies including home furnishings firm IKEA have shut stores.

Food companies Nestle, Mondelez, Procter & Gamble, and Unilever have halted investment in Russia, but said they would continue providing essentials.

Overall Russian import volumes for the week of March 2 to 8 have dropped 40% from the week of February 16 to 22 prior to the invasion, according to data from supply-chain tracking platform FourKites which analyzed all modes of transport including air and sea freight as well as by land using trucks.

The decrease has been across all industries with manufacturing, chemicals, as well as oil and gas import volumes down 33%, retail down 35%, and consumer packaged goods together with food and beverage down 57% over the same period, FourKites analysis showed.

“As their cargoes are now spread out in different ports all in the wrong place with the main [European] ports shying completely away from handling Russia-bound containers.”

The Russian government said on Thursday, March 10, it had banned the export of 200 items including telecom, medical, auto, agricultural, electrical, and tech equipment until the end of 2022, in retaliation for Western sanctions on Moscow.

The number of container ships within 50 nautical miles of Russian ports fell by nearly 30% by Monday, March 7, to around 177 vessels from over 250 on February 24, analysis from logistics platform project44 showed.

Container ships made 4,184 port calls to Russian ports in 2020, according to separate data from UNCTAD.

“We have to comply with the sanctions in place and as long as long as they are there, I do not think that we will have the ability to return,” Jansen told a virtual news conference on Thursday.

The situation is also challenging in other areas involving Russia’s vital oil trade.

According to Windward analysis, 248 tankers were reporting their positions as headed to Russia as of March 7. Of those, 149 were Russian flagged and a further 13 owned or operated by Russian affiliated companies.

That left 86 tankers not affiliated with Russian companies, which compared with 125 foreign tankers heading to Russian ports a month ago and 98 Russian flagged tankers and an additional 38 were owned or operated by companies registered in Russia, the Windward analysis showed.

Last week, British ship insurer West of England said it withdrew cover for two container ships operated by Russia’s FESCO Transportation Group after the vessels were listed by the US Treasury as part of broader sanctions.

“In the cargo sector, we are seeing more and more shipping companies suspend cargo bookings to and from Russia,” said Antonia Panayides, shipping partner with law firm Reed Smith.

“The sanction regulations are not static and must be carefully considered.”

There are also broader risks emerging with Russian trade.

There is concern among some shipping lines still sailing into Russian ports such as Saint Petersburg and the circumstances under which the Russian authorities could arrest the vessels, said Marcus Baker, with leading insurance broker and risk advisory Marsh.

“For example, if a vessel were to inadvertently damage port infrastructure and were to be arrested, there may be no guarantee that their insurance policies while covering the loss, could provide financial guarantees to what might be a sanctioned entity,” he said.

“Also many non-Russian ports are not permitting Russian ships to enter, thereby effectively stopping both the import to and export from Russia of any goods, which could have potentially far-reaching supply chain implications.” – Rappler.com