UNRAVELING THE TRUTH: Sen. Francis “Tol” N. Tolentino presides over the Senate Committee on Accountability of Public Officers and Investigations (Blue Ribbon) hearing Tuesday, August 23, 2022, following the privilege speech of Senate President Juan Miguel “Migz” F. Zubiri on the controversy of an order allowing the importation of 300,000 metric tons of sugar into the country. Tolentino, in his opening statement, said the purpose of the committee hearing is “to unravel and unpack the reasons behind Sugar Order No. 4, the alleged artificial shortage, hoarding, and what precipitated the executive branch…this body is also looking forward to what the executive has done so far and what the legislative body will be doing after filing of recommendations.” The issue stemmed from the publication of Sugar Order No. 4, authorizing the importation of additional sugar on the website of the Sugar Regulatory Administration (SRA), which the Palace immediately disowned. Photo by Voltaire F. Domingo/Senate PRIB

MANILA, Philippines – The Senate blue ribbon committee has recommended criminal and administrative charges against Agriculture Undersecretary Leocadio Sebastian, former Sugar Regulatory Administration (SRA) chief Hermenegildo Serafica, and two former members of the Sugar Regulatory Board over the issuance of an order that was not approved by President Ferdinand Marcos Jr.

Committee chairman Senator Francis Tolentino said on Thursday, September 8, that 14 out of 17 members of the Senate blue ribbon committee signed the report, with one dissenting opinion.

The committee recommended that the Office of the Ombudsman file charges against the following:

The committee found that the four officials committed “serious dishonesty, grave misconduct, gross neglect of duty, conduct prejudicial to the best interest of the service, and gross insubordination under the revised rules on administrative cases in the civil service.”

The committee recommended that the Ombudsman file charges against the officials for violating sections of the Anti-Graft and Corrupt Practices Act, the Anti-Agricultural Smuggling Act, and one count of usurpation functions under Article 177 of the Revised Penal Code.

The panel also recommended the following for remedial legislation:

Aside from the Department of Justice, the Commission on Audit, and the Office of the Ombudsman, the committee will also provide a copy of the report to the Bureau of Immigration for the inclusion of the names of Sebastian, Serafica, Beltran, and Valderrama in the immigration lookout bulletin.

The recommendations were read by the panel’s general counsel, Gerard Mosquera.

Senate Minority Leader Aquilino “Koko” Pimentel III said that they will file a separate report regarding the matter.

Deputy Minority Leader Risa Hontiveros said in a statement on Thursday she did not agree with the panel’s recommendation in relation to Sebastian.

“With due respect to the Chair, tila may ginawang (it seems there were those turned into) fall guys. Of course the President can retract orders and override policy, but I believe Usec. Sebastian when he says he was of the good faith belief that the importation not only was necessary, it had the support of the Chief Executive,” Hontiveros said.

She said the President had the power to recall SO4, which he did, “but to throw everything but the kitchen sink on Usec. Sebastian – na hindi naman kumita, wala namang kinubrang pera (who did not profit, and did not collect any amount) – discourages government officials from acting with urgency on matters that affect consumers, like tight supply, high prices, and inflations.”

“In fact, DA insiders say that department officials are now gun-shy about signing any importation documents, ‘Baka ma-Sebastian (We might be like Sebastian),’ further exacerbating the food shortage,” she added.

Hontiveros said the “vilification” of civil servants and the “dramatic” raids on warehouses and the sugar-laden vessel in Subic that turned out to be fully covered by the required documents made her wonder if these were just part of a cover-up.

“They make me ask: What are they hiding? What is the real score? Why did the ES need to be subpoenaed and why did he not disclose the August 4 meeting with the President in the first instance?” she said.

Hontiveros said, however, that she concurred with the findings of the panel regarding the existence of a sugar shortage.

“I concur with the findings of the committee that there “may have been” a sugar shortage. In fact, there was and there is a shortage. Facts don’t lie. The numbers don’t lie. I hope this puts to rest all speculation that the shortage is artificial, na may bode-bodegang asukal (that there are warehouses filled with sugar),” the senator said.

The Senate blue ribbon committee conducted three hearings centered on the issuance of Sugar Order 4 (SO4) that authorized the importation of some 300,000 metric tons of refined sugar but was rescinded after Marcos, the acting agriculture secretary, said he did not approve it.

Sugar officials insisted that they approved the said order after getting a “signal” from Executive Secretary Vic Rodriguez, but he denied these claims. Sebastian had repeatedly said during the hearings that he signed SO4 on behalf of the President “in good faith,” based on the urgency of the sugar importation, and on the authority given to him by a July 15 memorandum from the Office of the Executive Secretary. (READ: Hontiveros: ‘It seems many powerful forces at play’ in sugar import mess)

Rodriguez attended what was to be the final hearing on Tuesday, September 8, after the panel approved a motion to subpoena him to participate in the probe after repeated absences.

During the final hearing on Tuesday, Serafica revealed that during an August 9 Zoom meeting, Marcos floated the idea of importing 600,000 metric tons of sugar or twice the figure proposed by the SRA, but he informed him that it was too much, considering that the milling season had begun. Also in attendance in that hybrid meeting were Rodriguez and Valderrama, who corroborated Serafica’s statement, but Rodriguez denied that the President considered that importation volume.

Upon the request of Hontiveros on Tuesday, Tolentino was supposed to see the transcript, at least, of that meeting to check the veracity of Serafica’s claims. Tolentino had told the media in a news briefing after the final hearing that day that the 600,000-MT sugar importation supposedly broached by Marcos “will not affect the results” of their investigation. 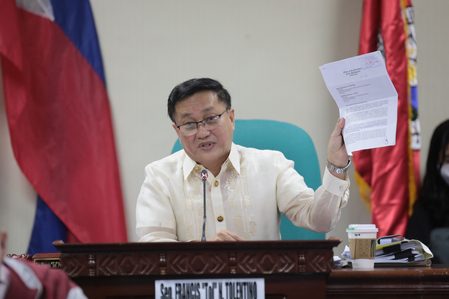