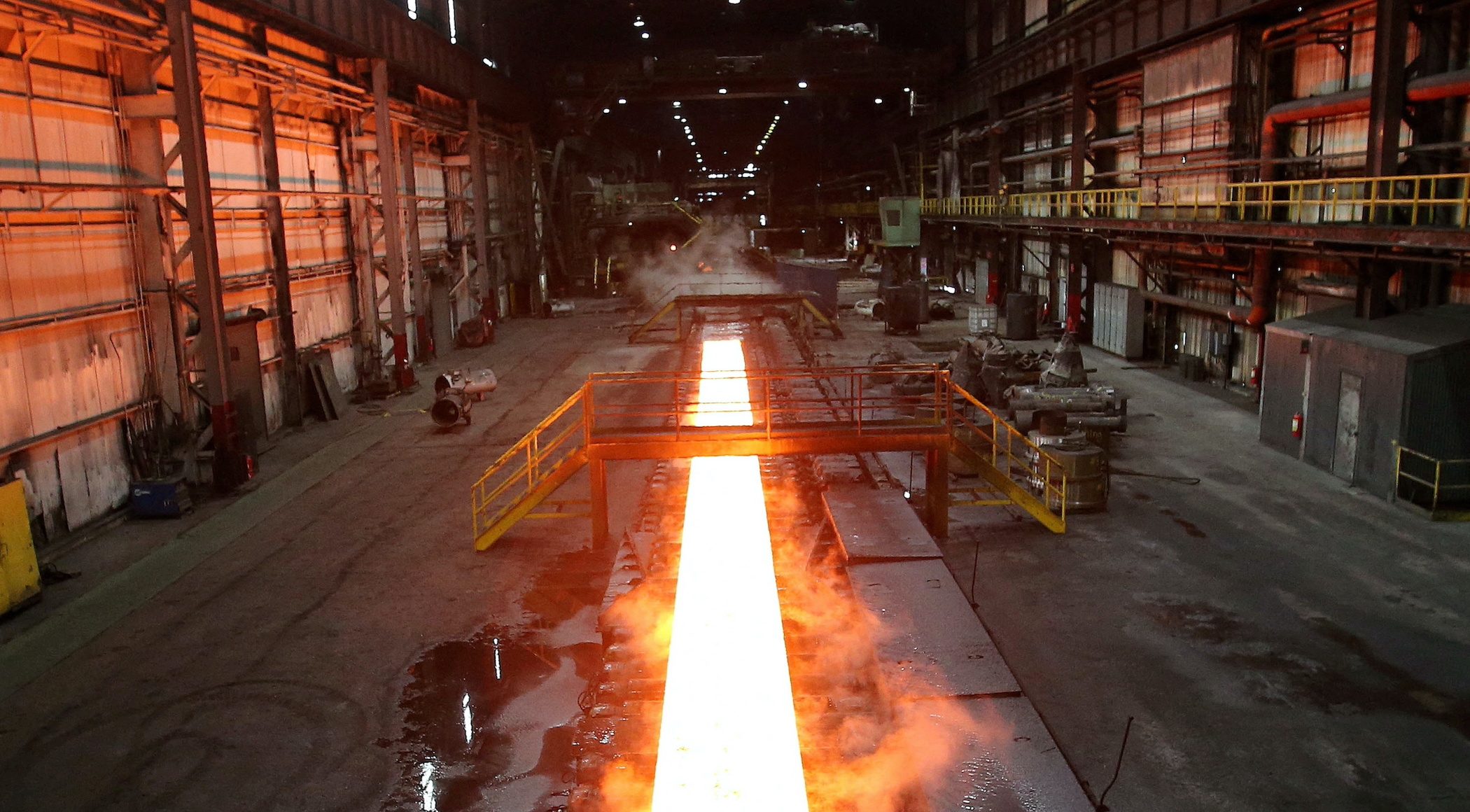 STEEL. Steam rolls off a slab of steel as it rolls down the line at the Novolipetsk Steel PAO steel mill in Farrell, Pennsylvania, March 9, 2018.

Facebook Twitter Copy URL
Copied
After ending their trade dispute, the United States and Britain will focus on what they say are China's 'unfair trade practices'

The United States and Britain ended a four-year dispute over US steel and aluminum tariffs on Tuesday, March 22, pledging to work together to counter China in a deal that also removes retaliatory tariffs from US motorcycles, whiskey, and other products.

In a joint statement, US Commerce Secretary Gina Raimondo and US Trade Representative Katherine Tai said the deal would protect steel and aluminum companies – and their workers – in both countries, allowing the allies to focus on what they say are “China’s unfair trade practices.”

The would also help ease inflation in the United States, where consumer prices have hit their highest level in 40 years, Raimondo said.

Under the deal, Britain will receive a duty-free import quota of over 500,000 tons of steel “melted and poured” in the country annually, with higher volumes subject to the 25% tariff.

It also sets smelt and cast requirements on aluminum, requiring importers to certify the origin of raw aluminum used, a move to combat subsidized metal from China and other countries.

The agreement requires any UK steel company owned by a Chinese entity to audit their financial records to assess influence from the People’s Republic of China government, and then share them with the United States, the statement said. The requirement will initially apply to British Steel, acquired by China’s Jingye Group in 2020.

The announcement of the deal was warmly welcomed by many business executives and labor leaders in both countries.

The United States has reached similar deals with the European Union and Japan.

British Prime Minister Boris Johnson hailed the deal in a tweet as “fantastic news and a very welcome boost to our steel and aluminum industries.”

Trevelyan said the deal would help support some 80,000 jobs across Britain. She met with Raimondo in Washington after two days of meetings with Tai and other US trade officials about expanding US-UK trade ties and ensuring that both countries address a changing digital economy and protect labor rights and the environment.

But Britain, whose steelmakers use coal-fired blast furnaces, will not join US-EU talks aimed at reducing the steel industry’s carbon footprint, choosing instead to consult with Washington on methodologies for measuring emissions.

The Trump administration imposed the tariffs of 10% on aluminum and 25% on steel in March 2018 under the Section 232 national security law to protect US producers from a flood of subsidized imports.

The US Steelworkers Union said the deal marked “an important step in addressing systemic problems like illegal dumping and global overcapacity that threaten the vitality and future of our steel and aluminum industries.”

It said the arrangement with Britain left the overall structure of the 232 relief measures in place.

Myron Brilliant, the head of international affairs for the US Chamber of Commerce, warned of a possible steel shortage due to trade disruptions from the war in Ukraine, called for the Section 232 tariffs to be removed from more countries.

Steelmakers have expressed concerns that easing the tariffs for allied countries will allow surges of steel into the United States that could hurt industry profitability. But futures prices for Midwest hot-rolled steel remain elevated at $1,138 per ton, compared to $1,265 a year ago, more than $1,900 last August, and $825 when tariffs were first imposed in 2018. – Rappler.com