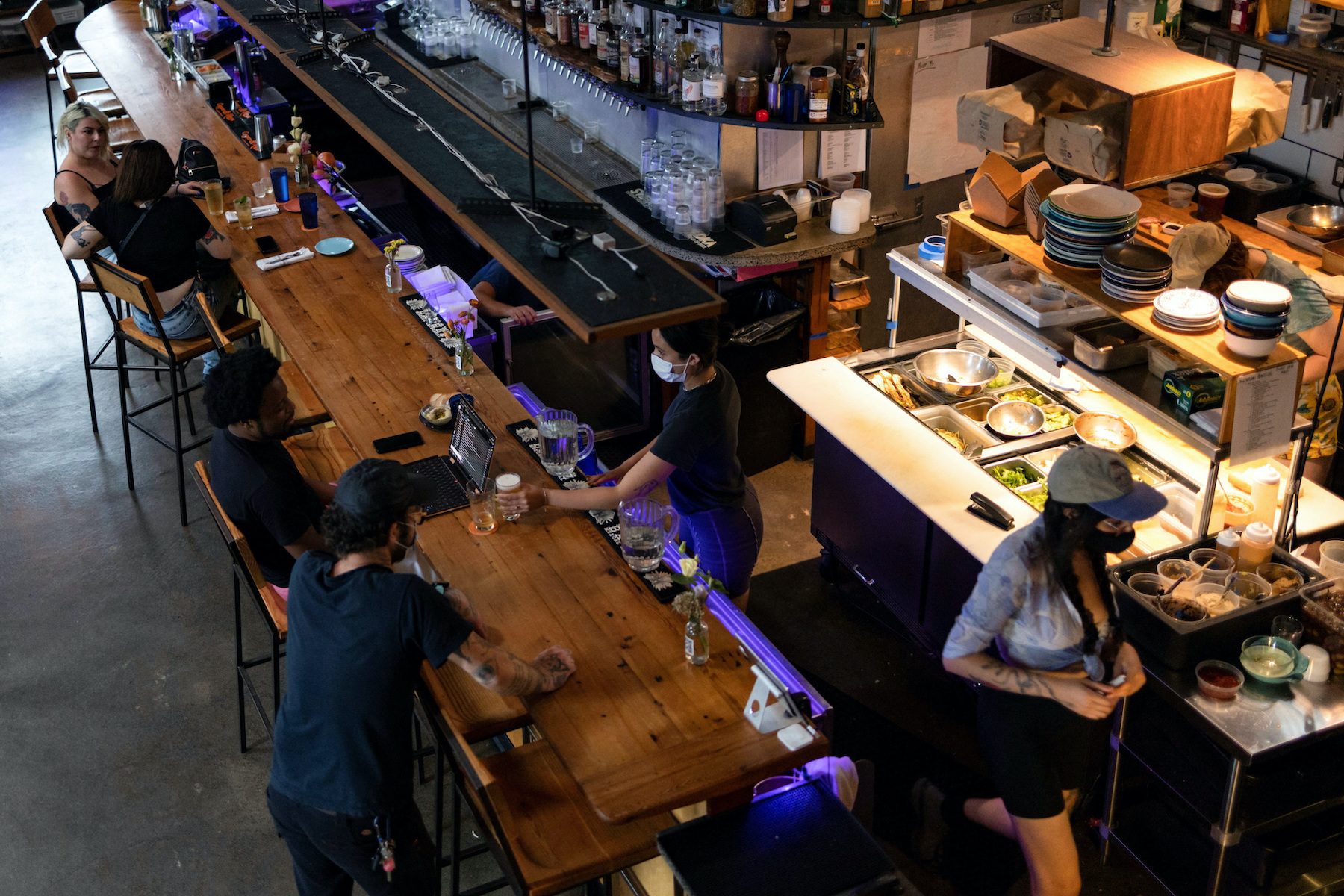 SERVICES. Customers drink and dine inside a restaurant after showing proof of their COVID-19 vaccinations upon entering, in Philadelphia, Pennsylvania, August 7, 2021.

US business activity contracted for a fifth straight month in November as higher interest rates slowed demand but the downturn in eurozone business activity ebbed slightly as the world braces for a recession-hit year ahead, surveys showed on Wednesday, November 23.

S&P Global said its flash US Composite Purchasing Managers’ Index (PMI), which tracks the manufacturing and services sectors, fell to 46.3 this month from a final reading of 48.2 in October. A reading below 50 indicates contraction in the private sector.

Activity is slumping under the weight of the Federal Reserve’s most aggressive interest rate-hiking cycle since the 1980s aimed at curbing inflation by dampening economic demand. By the US central bank’s preferred measure, inflation is still running at more than three times its 2% goal.

The flash composite new orders index dropped to 46.4, the lowest level in two and half years, from a final reading of 49.2 in October. Outside the initial wave of the COVID-19 pandemic, this was the worst reading since 2009.

A Reuters poll of economists last week gave a 60% chance of a US recession within a year and the Fed is primed for a 50-basis-point hike at its next policy meeting in three weeks time as the battle to quash high inflation continues.

Meanwhile, the downturn in eurozone business activity eased slightly in November, offering a glimmer of hope the expected recession there may be shallower than feared, but consumers still cut spending amid a cost-of-living crisis.

There has been mounting evidence the bloc is entering a recession and in a Reuters poll published on Tuesday, November 22, economists gave a 78% chance of one within a year.

S&P Global’s flash Composite PMI, seen as a good gauge of overall economic health, nudged up to 47.8 from 47.3 in October, confounding expectations for a fall to 47.0 in a Reuters poll.

However, November is the fifth month the index has been below the 50 mark separating growth from contraction.

“Today’s PMI data continue to show that the eurozone has entered a recession, with the surveys pointing to a milder contraction compared to previous recessions,” said Paolo Grignani at Oxford Economics.

The downturn in German economic activity also eased in November, a sister survey showed, offering some hope an expected recession in Europe’s largest economy could be milder than first feared.

But in France, activity contracted for the first time since February 2021 as lower new orders weighed on the eurozone’s second biggest economy.

In Britain, outside the European Union, economic activity fell at close to its fastest pace in nearly two years in November, adding to signs of recession there.

Elsewhere in the reports, there were some glimmers of hope in the fight against inflation, even as evidence suggests a slowdown in price pressures will be gradual with wages remaining sticky for now.

In the United States, the survey’s measure of prices paid by businesses for inputs slipped to 65.7, the lowest level since December 2020, from a final reading of 67.0 in October. That reflected an easing in supply bottlenecks.

Businesses were also raising prices for their products at the slowest pace in just over two years, in part because of ebbing demand.

The survey’s flash manufacturing PMI dropped to 47.6 this month, the lowest reading since May 2020 with new orders remaining subdued, but price pressures continued to abate as manufacturers signaled the first improvement in supplier performance since October 2019. Average input prices also increased at the softest rate in two years, but factories still faced challenges finding skilled labor.

The survey’s flash services sector PMI decreased to 46.1 from 47.8 in October. Services businesses also reported weak demand and a moderation in input prices.

In the eurozone, there was a similar trend. New orders fell sharply again and there was a marked drop in price pressures with the output prices index falling to 63.7 from 66.1, its lowest reading since March 2021.

Still, inflation in the region remains unacceptably high. It reached 10.6% last month, more than five times the European Central Bank’s 2% target, and the ECB is expected to add another 50 basis points to its deposit rate next month so any sign of an easing in price pressures will be welcomed by policymakers.

Activity in the bloc’s dominant services industry declined again, with the headline index matching October’s 20-month low of 48.6. Despite the ongoing slowdown, firms did increase headcount, albeit at the weakest pace since March 2021.

Manufacturing activity, particularly hard hit by soaring energy prices and disrupted supply chains, also declined but at a slower pace. The main index rose to 47.3 from 46.4, above the Reuters poll estimate for 46.0.

“The input and output price indices declined, consistent with other evidence that headline inflation is close to peaking,” said Jack Allen-Reynolds at Capital Economics.

“But they are both still extremely high with services firms in particular reporting that rising wages were putting upward pressure on costs.” – Rappler.com