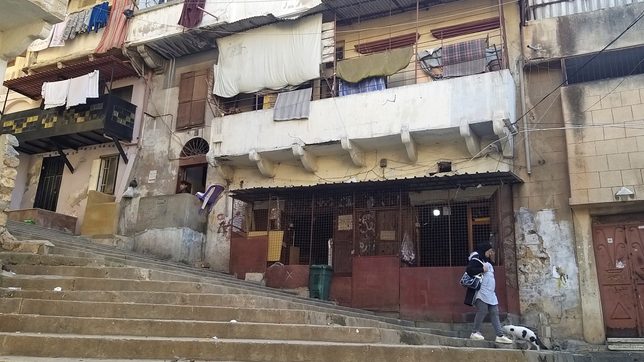 GLOBAL POVERTY. A woman walks down the stairs near residential buildings in Tripoli, Lebanon, November 11, 2021.

WASHINGTON, USA – World Bank President David Malpass on Monday, December 6, said fiscal and monetary policies were operating in “uncharted territory” since the start of the COVID-19 pandemic and may be contributing to a sharp rise in global inequality and poverty.

Malpass told a roundtable hosted by Chinese Premier Li Keqiang the number of people in extreme poverty had increased by over 100 million since the beginning of the pandemic even as global spending has increased to an all-time record.

Advanced economies have rebounded, while the poorest countries had seen only a weak rebound, or none at all, he said. This was causing “tragic reversals” in median incomes, women’s empowerment, and nutrition, he said, and inflation, supply chain bottlenecks, and high energy prices were aggravating these trends.

“Part of the inequality problem is global finance itself and the unequal structure of the stimulus,” Malpass said, noting that prevailing sovereign debt and fiscal and monetary policies were adding to inequality.

Malpass said monetary policy in the advanced economies had long focused on reserve requirement ratios and limited growth in bank reserves to achieve stability in currencies and prices, an approach still used by China.

Other major central banks had switched to a “post-monetarism system” of using very large amounts of excess bank reserves to purchase and hold long-duration bonds and other assets, which he said provided price support for a highly select group of assets.

That approach, he said, excluded small businesses and developing countries, while restraining policy through regulation of liquidity and bank capitalization ratios.

Fiscal policy was also channeling resources to narrow groups within major borrowers, while leaving others behind, and sovereign debt policies were contributing to inequality.

Malpass repeated his call for greater transparency in debt contracts and a freeze in debt payments for countries with unsustainable debt. He said creditors should move away from collateral and escrow arrangements.

“As one of the largest creditors of developing countries, China’s active participation and strong voice in debt reduction efforts are very much needed and would benefit all participants by encouraging sustainable investment and debt,” he said. – Rappler.com