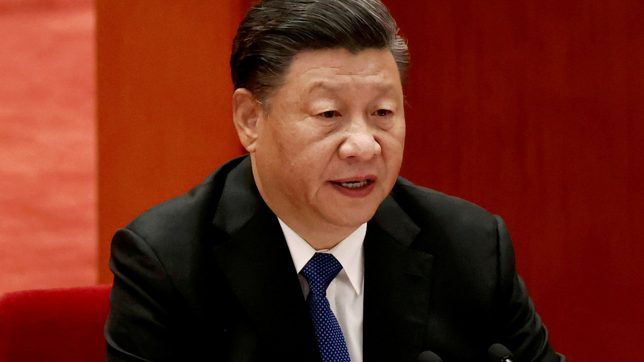 CHINA'S LEADER. Chinese President Xi Jinping speaks at a meeting commemorating the 110th anniversary of the Xinhai Revolution at the Great Hall of the People in Beijing, China, October 9, 2021.

China will strengthen risk prevention and control in its giant Belt and Road Initiative (BRI) infrastructure project linking the country to the rest of the world, state media quoted President Xi Jinping as saying on Friday, November 19.

The BRI presents opportunities, but the international environment has become increasingly complex, spurred by increased technical and industrial competition, environmental changes, and the COVID-19 pandemic, Xi was quoted as saying.

The United States plans to invest in 5 to 10 large infrastructure projects around the world in January as part of a broader Group of Seven program to counter Belt and Road, a senior US official said last week.

The European Union is also planning a global infrastructure plan linking Europe to the world.

China plans to protect Chinese interests overseas, beef up security for Chinese firms, and guarantee their demand for workers, materials, and capital, Xi was quoted as saying.

The BRI has been praised for its potential to improve infrastructure and speed up economic development in many developing countries but criticized for potentially saddling many of them with unsustainable debt. – Rappler.com