But the risk paid off for the half-Filipino 16-year-old.

Sanchez started her performance seated on the piano and displayed her trademark tone and control from the get-go.

Guest mentor Akon was generous with his praises, too. “Yo, I knew from day one, I said she’s going to be a legend one day. I believe it, I really do,” he said.

Jackson praised the arrangement: “You set the bar really high. Dude, that was superb. That was at like the highest degree. The control, you scatting and all of this … you did an amazing job. To me, right now, you slayed the biggest fish of the night.”

Another judge, Jennifer Lopez, challenged her: “That was really beautiful. What I’d love to see from you, is some almost-like Joshua-type performances. You can do it. You can show us something we’ve never seen!”

Sanchez and co-contestant Joshua Ledet are considered the frontrunners in the show. They performed a duet in previous week’s show, earning a standing ovation from the judges.

Sanchez and Ledet teamed up again for a duet on Kelly Clarkson’s What Doesn’t Kill You, along with another contestant, Hollie  Cavanagh.

On the Top 7 performance night, Ledet sang a Bruno Mars tune called Runaway Baby, described by Jackson as “unbelievable” and by Steven Tyler as proof that Ledet can “sell a song like a work of art.”

As for Sanchez’s performance, judge Tyler did not just comment on her singing but also on how she looked: “Jessica, every time I hear you sing I forget where I am. But America doesn’t forget — you fish slay it every time. You had the nerve to sing a great song and you had the nerve to wear Jennifer’s shoes!”

The camera quickly panned to Sanchez standing next to host Ryan Seacrest. Lopez commented on how Sanchez has “great taste.” 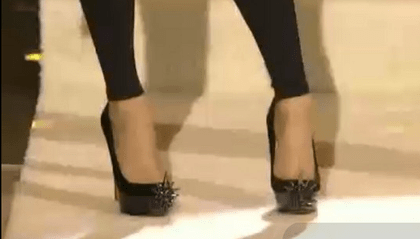