BEA ALONZO. The actress opens up about her past relationship with actor Gerald Anderson. 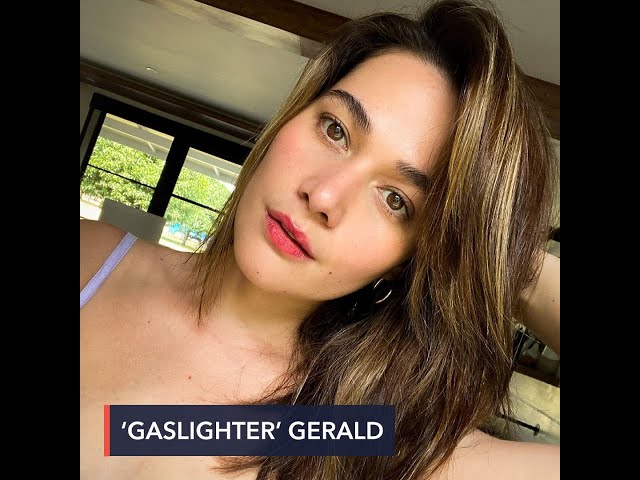 Bea Alonzo did not hold back when she opened up about her previous relationship with actor Gerald Anderson, saying that on top of cheating on her and ghosting her, he also gaslighted her.

“Apart from, of course the whole infidelity thing and the whole ghosting thing, I think I’m mad at him more because he gaslighted me,” Bea said in an interview with G3 San Diego for Mega Entertainment.

“I think it was more of that and until now, he’s not holding himself accountable. That’s what really gets me. He has not changed. Not a bit. He was only protecting himself. He’s selfish,” she said.

Bea and Gerald’s relationship came to a controversial end in 2019, when Bea said Gerald had ghosted her.

At the time, Bea had been putting up cryptic posts on her social media, implying that she had been betrayed. People assumed that the posts were in connection with her relationship with Gerald. When asked to clarify their status, she said “he just started not talking to me.”

Fans speculated that Gerald had cheated on Bea with his Between Maybes co-star Julia Barretto, after they were seen together at a party. Gerald and Julia initially denied being involved in any cheating. The two recently made their relationship public.

In the Mega interview, Bea shared that her longtime love team partner John Lloyd Cruz had an “I told you so moment” when she was going through the break-up “because he never really wanted that guy for me. Well, he never wanted anybody for me.”

“He told me that I can survive it, and he kept telling me that I don’t love him,” Bea said. “But I didn’t believe him. Because I loved Gerald.”

She also shared that since their break-up, she encountered Gerald just once, very briefly at the 2019 ABS-CBN Ball. She said that she didn’t get a chance to confront him because they were caught in the crowd, but that “I would’ve slapped him. I would have.”

Bea said that when Gerald ghosted her, she felt like she was scammed, and that posting when she did on social media was like taking a weight off her shoulders.

She said that after their relationship she learned “not to let myself be cheated on that way ever again, by anybody. I will never subject myself anymore to that type of relationship.”

Bea also revealed to G3 that she was dating actor Dominic Roque, but not exclusively.

“No. Wala pa kami (we aren’t exclusive yet)…as much as I don’t want to be a prisoner of my past, meron din akong parang, nahihiya ako sa mga tao na (I’m embarrassed to admit that) ‘I’m 33, I am dating.'”

She said she wasn’t sure if their current relationship would lead to something else because she didn’t want to fail again, but that Dominic was “a good guy.”

Bea and Dominic sparked dating rumors in 2020, after being spotted together in similar venues. – Rappler.com