Road to Venice: Erik Matti’s ‘On The Job: The Missing 8’

Facebook Twitter Copy URL
Copied
'On The Job: The Series gives everyone a glimpse of what it’s like to be in the Philippines,' says director Erik Matti

Seven years after the premiere of On The Job, its highly-anticipated sequel On the Job: The Missing 8 is set to premiere at the 78th Venice International Film Festival. It’ll stream in Asia on September 12 as an HBO Asia Original series on HBO Go.

“Both the Venice and the HBO deal went through, and it’s good for the film kasi four years naming trinabaho ‘yan and tinamaan pa kami ng pandemic,” director Erik Matti said in a Rappler Talk interview that aired Tuesday, September 7.

(Both the Venice and the HBO deal went through, and it’s good for the film because we worked on it for four years and we even got hit by the pandemic.) 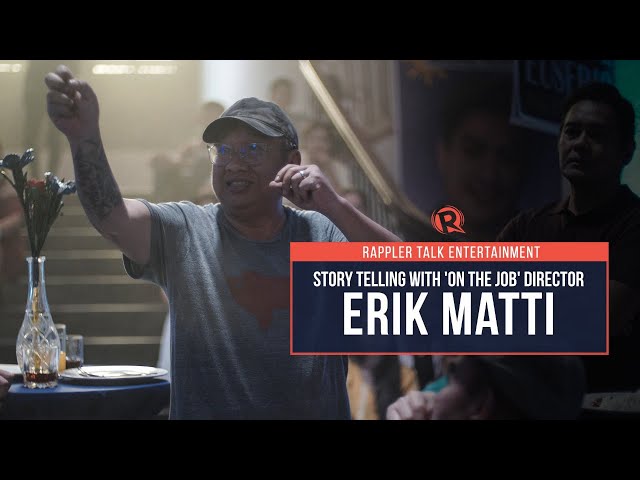 According to Matti, writer Michiko Yamamoto started working on On The Job: The Missing 8 in 2017, four years after the release of the first movie.

The film, “inspired by true events,” follows Sisoy Salas, a corrupt journalist in a small town who seeks justice for his missing colleagues, and Roman Rubio, a convict who’s regularly brought out of prison to execute powerful peoples’ enemies. Their paths cross as Sisoy seeks the truth behind his colleagues and friends’ fate and Roman, who is wrongfully convicted, tries to take back his freedom.

Part of the research, said Matti, involved interviewing Filipino journalists Raffy Lerma, Ed Lingao, and Chiara Zambrano. The On The Job team also hired a journalist from Probe, to research on topics they couldn’t cover via internet research.

Even after years of pre-production, research, and shooting, Matti and his editor Jay Halili found themselves in trouble during the editing process.

He explained, “We hit a wall – kami ng editor ko (my editor and I). It [didn’t] flow right.” Matti and his editor were then forced to take a break after quarantine restrictions were imposed because of the pandemic.

“Pagbalik namin to edit, we knew what to do. ‘Yung pandemic na ‘yan gave us that break to look at it with fresh eyes. When we sat down to edit it, parang alam na namin,” Matti shared.

Instead of jumping from Sisoy to Roman, Matti and Halili decided to focus on one character at a time, until their paths eventually crossed in the film.

The result? A three-hour and 28-minute long cut. “As long as it doesn’t bother the storytelling, I wanna include the entire script. I ended up with a three-hour 28-minute cut. Happy na ako. I thought the story could work,” said Matti.

Happy as he was with the flow of the movie, its length was a cause for concern. This was in the middle of 2020, and in the Philippines, the pandemic’s end was nowhere in sight. Cinemas were unlikely to be opened soon – in fact, as of September 2021, Philippine cinemas has remained shut.

They then decided to pitch the project not just as a film but as a series tied to the first movie.

“When [the producers] sat down and watched the film in its entirety, nakangiti na silang lahat (they were all smiling) because they know it’s gonna turn into a series. It worked,” he said.

The first two episodes of the HBO Asia Original is an extended version of the first film. Since it would be a presented as a series this time around, Matti was able to introduce scenes that didn’t make it to the movie version – most notably, those that explored the characters of Gerald Anderson, Piolo Pascual, and Joey Marquez.

He also submitted the full-length film version of On The Job: The Missing 8 to the Venice Film Festival.

“In the pandemic, it’s so hard to rise above and be recognized kasi lahat ng tao, lugmok globally (because a lot of people are down globally). For the movie to appear in Venice amidst all the films that were submitted, and then to also be afforded a general release by HBO as a streamer, parang win-win siya (it’s a win-win) on both ends,” he said.

Matti said, “Oftentimes, it’s hard for us Filipinos to get our films be seen by a wider audience. But On The Job, despite all that happened in the pandemic, still managed to do that for us and that’s what we’re proud of.”

“On The Job: The Series gives everyone a glimpse of what it’s like to be in the Philippines,” added Matti – Patrick Miguel/Rappler.com