[Only IN Hollywood] 2 Filipinos, others in historic Oscar nominations 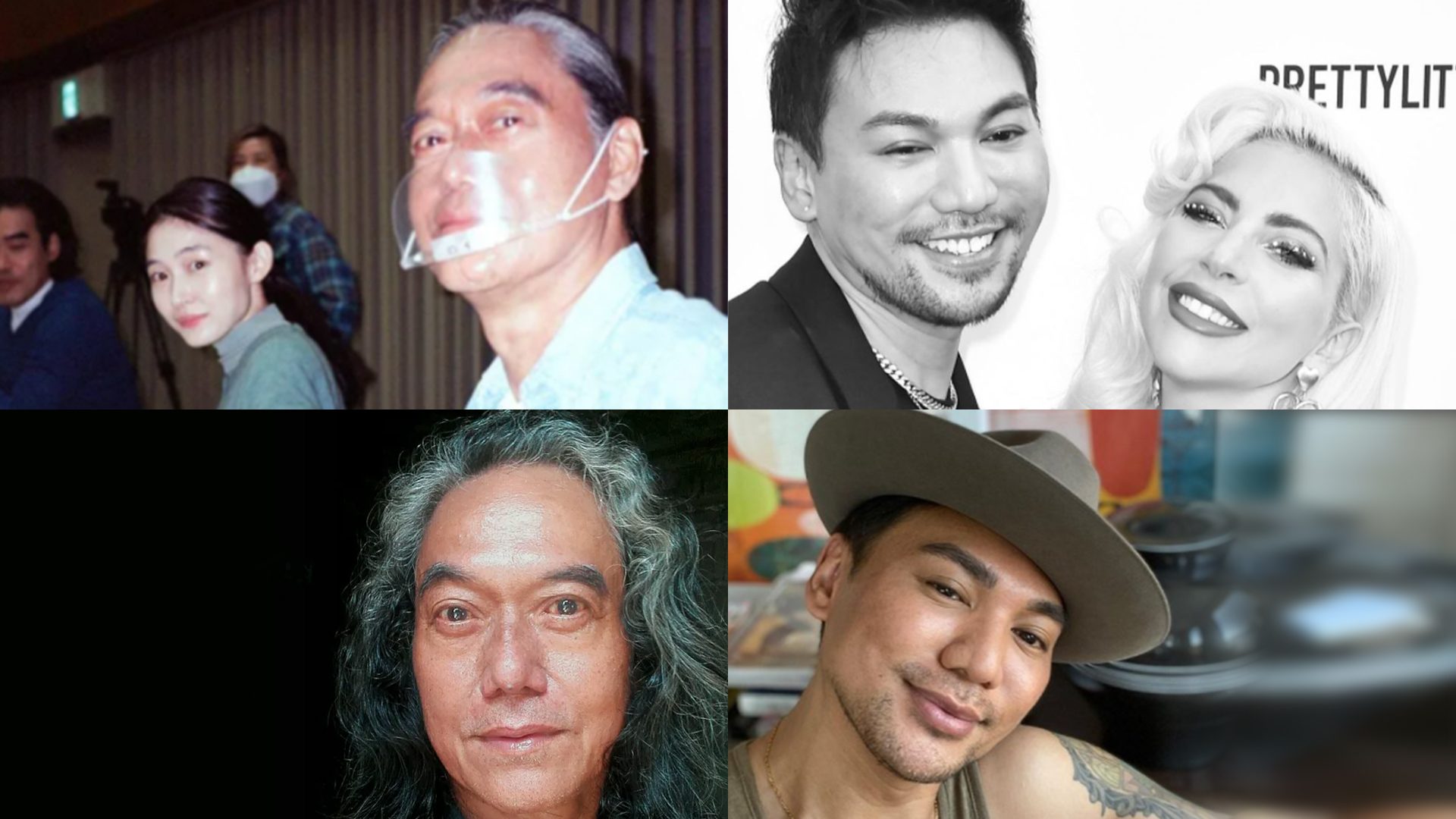 NOMINEES. Perry Dizon, Frederic Aspiras and others figure in historic Academy nominations. Collage made from IG screenshots and contributed photos.

Frederic became the first Filipino-Vietnamese to earn an Oscar nod for makeup and hairstyling. The artist, whose Filipino father was in the army while his Vietnamese mother owned a hair and makeup salon, was nominated with Goran Lundstrom and Anna Carin Lock for their work in House of Gucci.

The Ridley Scott-directed film stars Al Pacino, Adam Driver, and Lady Gaga, who is Frederic’s long-time friend. The San Francisco-raised hair and makeup artist has been helping create Lady Gaga’s iconic looks, from the Oscars, to the Golden Globe Awards, to the Met Gala.

Frederic was quoted by People magazine on how he transformed Lady Gaga into Patrizia Reggiani, who married the Gucci heir in House of Gucci: “We re-dyed her real hair from her platinum signature blonde hair back to brown months before the movie was shot, just so that she could feel in the character.”

“I mean, you’re talking about someone who is so devoted to characterization and the art that she willingly wanted to color white hair. It was past her shoulder, it was very healthy, gorgeous, and wanted to color it brown.”

“And I was so beside myself. I was crying. I was like, ‘Are you sure about that?’ ‘Like, yes.’ And we colored it brown.”

All thanks to Drive My Car, which stars Hidetoshi Nishijima, Toko Miura, and Reika Kirishima, and where Perry costars as a Pinoy thespian in a multi-lingual staging of Anton Chekhov’s Uncle Vanya in Hiroshima.

Japanese films have been cited in the Oscars, but Drive My Car’s four nods have marked the first time since Akira Kurosawa’s Ran also got four Academy citations – in 1985 for best director, cinematography, art direction, and costume design.

The nods for Ryusuke Hamaguchi’s acclaimed three-hour drama are major ones. Drive My Car tied with Guillermo del Toro’s Nightmare Alley and Adam McKay’s Don’t Look Up with four nominations each.

When I congratulated Perry, who has appeared in numerous Filipino movies and plays, on Drive My Car’s Oscar nods, he replied via email, “Thank you for this shout-out. I am honored to be part of Drive My Car which garnered four nominations in the 94th Academy Awards. Wonderful announcement night here in my valley in Maco, Davao de Oro.”

“It’s 10:41 at night and people from the US and Manila are still messaging me about the announcement. I can’t describe my feelings but just, wow!”

“I had an earlier conversation with our producer, Teruhisa Yamamoto. He was thanking me for being one of the actors of the movie he produced.”

“He said, ‘Today, the nominations of the Academy Awards will be announced. I don’t have high hopes that the film will be nominated but if it will be…’”

Perry added that Teruhisa again credited him, the cast, and crew for the critical success of the film which romped away with the Golden Globes’ best motion picture-non-English language prize last January.

“He is such an endearing person, indeed, who will make your day. I answered him back, ‘Wow! That’s wonderful news if our film will be nominated.’”

“Crossing fingers here that our efforts will be included in the Academy Awards, though I believe right from the very last day of filming and I declared to the team that Drive My Car is one of the most important films of the 21st Century. Thank you, Yamamoto-san.”

Perry, whom I featured earlier for being cast in Drive My Car, added, “It is so humbling [an] experience that a small player coming from a small town in Mindanao is part of a global event, the Oscars.” Ariana DeBose, who scored her first nomination (supporting actress) for West Side Story, became the first Afro-Latina actor nominated by the Academy.

The Broadway star played Anita in Steven Spielberg’s 2021 movie, the same role for which Rita Moreno won the Oscar best supporting actress award in 1962. Rita made history as the first Latina to win that award while wearing a gown by the late revered Filipino designer, Pitoy Moreno.

The veteran actress famously wore the same gold and black gown more than half a century later in the 2018 Oscars.

If Ariana triumphs on March 27, she and Rita will be the only pair of actresses to win for the same role in the Academy’s history. Ariana and Rita already accomplished the feat in this year’s Golden Globes.

Another first was set when two couples bagged acting nods. The nominations of Penelope Cruz and Javier Bardem, and Kirsten Dunst and Jesse Plemons celebrated the first time that the four acting fields have two couples in real life.

On her own, Penelope also set an Academy precedent as the first to get two best actress nods for Spanish-speaking roles (Parallel Mothers and Volver, both by her beloved mentor, Pedro Almodovar).

Judi Dench, who was hardly mentioned by the awards pundits before the nominations announcement, surprised these so-called prognosticators by earning a nod at 87 years old and becoming the oldest best supporting actress nominee, for Kenneth Branagh’s Belfast.

Speaking of Kenneth, he established the Academy record for having the most nominations – seven in the most number of categories in his career. The multi-talented Brit has seven nods in seven categories.

With his best actor nomination for his title role in Joel Coen’s The Tragedy of Macbeth, Denzel Washington became the first Black actor to cinch nine or more nods. In music, Beyoncé added Oscar nominee to her résumé when she and DIXSON landed a best original song nod for “Be Alive” from Will Smith’s King Richard.

In the same category, Lin-Manuel Miranda moved closer to joining the EGOT, that elite circle of talents who have won Emmys, Grammys, Oscars, and Tonys, when he garnered a nomination for “Dos Oroguitas” from Encanto. If he wins, Lin-Manuel will become the newest member of EGOT.

Also in this category, Billie Eilish and her brother, Finneas, snagged their first Academy nod for “No Time to Die” from the James Bond film of the same title.

In other categories, Jane Campion became the first woman to garner two best director citations in her career. The New Zealand filmmaker was cited for The Power of the Dog, the most nominated film with 12. Jane’s first nod was for 1994’s The Piano.

Only seven women have received the best director nomination honors. If Jane wins, she will become only the third woman best director in the 94-year history of the Academy. The pioneering winners were Kathryn Bigelow (The Hurt Locker) and Chloe Zhao (Nomadland).

Still on The Power of the Dog, Ari Wegner is only the second woman to get the best cinematography nod. If she triumphs in March, Ari will break another ceiling and become the first female DP to win.

The best picture nod for his West Side Story made Steven, as a producer, the only person in the Academy’s history to nab 11 nominations in that prime category. He shared the nod with Kristie Macosko Krieger.

The winners will be announced on March 27 at the Dolby Theatre in Hollywood. – Rappler.com