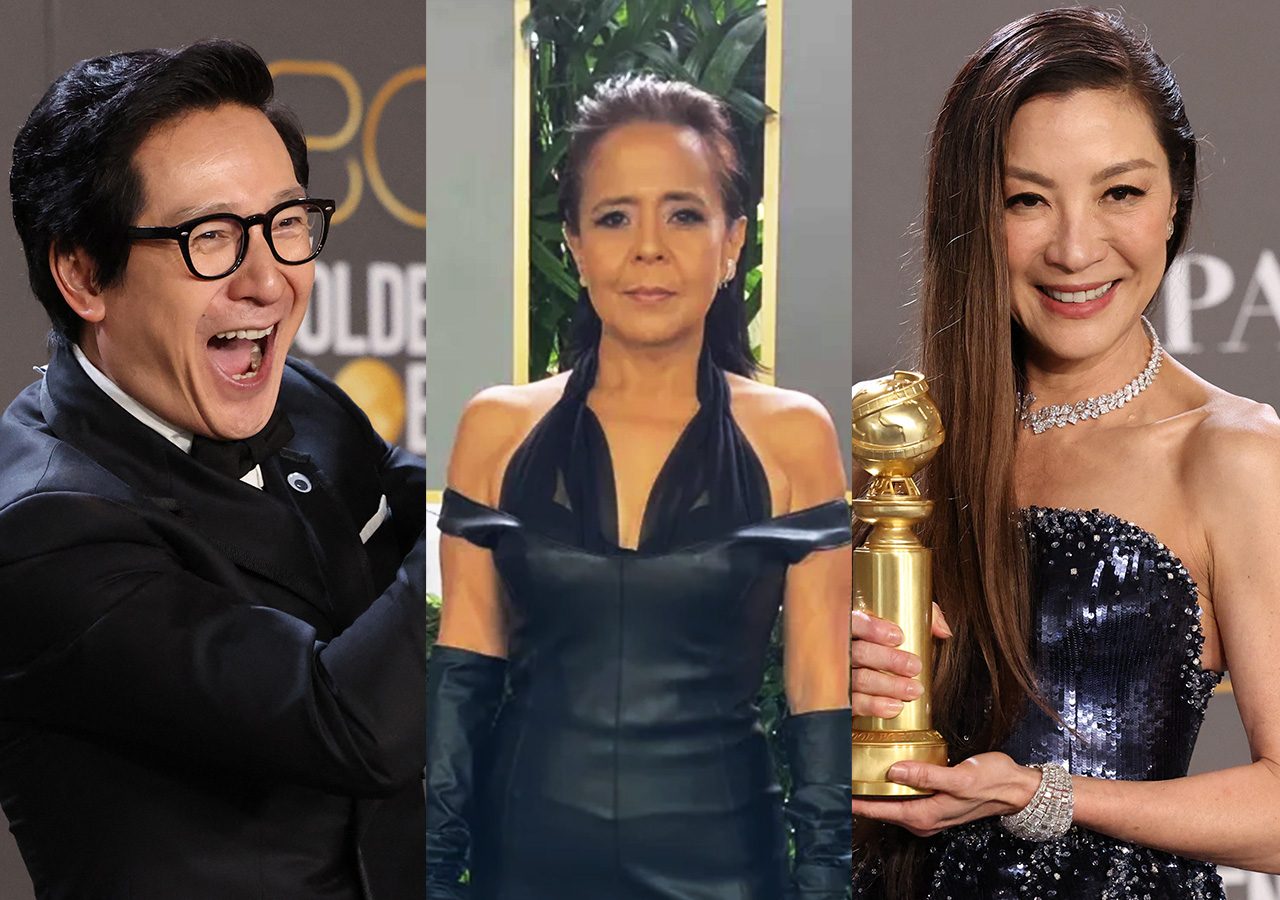 Facebook Twitter Copy URL
Copied
Seated among the best and the brightest in film and American television at the International Ballroom, De Leon beamed with pride as her name was announced as one of the nominees

Seated among the best and the brightest in film and American television at the International Ballroom, De Leon beamed with pride as her name was announced as one of the nominees, along with Angela Bassett (Black Panther: Wakanda Forever), Kerry Condon (The Banshees of Inisherin), Jamie Lee Curtis (Everything Everywhere All at Once), and Carey Mulligan (She Said).

Bassett won the Globe for her supporting role as Queen Ramonda in Black Panther Wakanda Forever.

Ruben Nepales, longtime member and former chair of the Hollywood Foreign Press Association (HFPA), said De Leon’s historic nomination for best supporting actress was “already a big win by itself ” and shone a bright light on her powerful performance as a toilet cleaner on a luxury cruise ship in Ruben Ostlund’s Triangle of Sadness. The HFPA has hosted the Golden Globes for the past 80 years.

De Leon also won the best supporting performer award from the Los Angeles Critics Association – another first for a Filipino actor – in a tie with Ke Huy Quan for Everything Everywhere All at Once. Quan took home the Golden Globe for best supporting actor in a movie.

“Dolly’s unforgettable portrayal of Abigail and the subsequent rave reviews and citations, including Golden Globes’, are already opening doors for her in Hollywood and beyond,” Nepales said.

“Dolly is still a winner to me,” said former HFPA Executive Secretary Janet Nepales. “She proves again that our Filipino talent is on par with talents in Hollywood and the global stage.”

Nepales said she hopes De Leon’s success will encourage and inspire “other unsung, unappreciated, and overlooked actors and actresses in the Philippines who have been plowing their way all these years to just take a chance, look outside the box, and get out of their comfort zone.”

A night of Asian American representation

Michelle Yeoh accepted her award for Best Actress in a Musical or Comedy for her role as Evelyn Quan Wang in Everything Everywhere All at Once.

“It’s been an amazing journey and incredible fight to be here today. But I think it’s been worth it,” Yeoh said in her speech. Yeoh was nominated along with Margot Robbie (Babylon), Lesley Manville (Mrs. Harris Goes to Paris), Anya Taylor-Joy (The Menu), and Emma Thompson (Good Luck to You, Leo Grande).

Ke Huy Quan won the Golden Globe for best supporting actor in a movie for his role as a doting husband and laundromat owner Waymond Wang.

Quan, who became the first actor of Asian descent in nearly 40 years to win in this category, beat out Brendan Gleeson and Barry Keoghan, who were nominated for their roles in The Banshees of Inisherin, Brad Pitt for Babylon, and Eddie Redmayne for The Good Nurse.

Another boost for Asian American representation, acclaimed pianist Chloe Flower performed in the show aired live coast to coast on NBC, streamed on Peacock, and viewed in over 200 territories worldwide. Flower is a passionate activist for women of color in the music industry,

Besides De Leon, another Filipino – Januel Mercado – shone when the film he co-directed, Puss in Boots: The Last Wish, earned a best motion picture – animated nomination. Mercado’s father is from Manila and his mother is from Santa Cruz, Zambales.

The Golden Globes “red carpet” was actually grey this year, matching the cloudy sky as a rainstorm pounded Los Angeles County. The Hilton’s driveway, from the bleachers, to the limo drop off, to the red carpet was tented.

Ruben Nepales wore a mahogany red silk suit designed by San Diego-based Filipino designer Kenneth Barlis, who has been worn by talents and celebrities on the red carpet, at top events, and in fashion spreads and covers.

Among the Filipinos spotted on the red carpet were accomplished designer David Tupaz; businessman Geoffrey Jimenez, who chairs the board of directors of Worldwide Media Entertainment Corp.; the new owner of Miss Filipina International, Benjamin Manansala Cabrera, CEO of Worldwide Media Entertainment Corp.; and Desiree Baker, a healthcare executive with Dignity Health.

The Los Angeles-based Miss Filipina International is currently looking for candidates of at least ¼ Filipino descent from around the world for this year’s event to be held in August. – Rappler.com