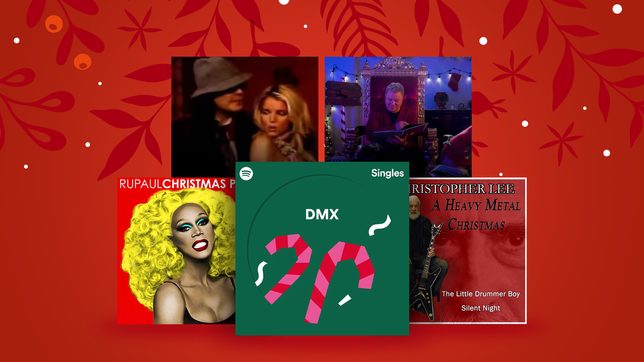 As much as we love Mariah Carey, there’s only so much “All I Want for Christmas Is You” we can take leading up to Christmas Day. Fortunately, there are tons of Christmas carol covers to fill up your holiday party playlist – including ones from people you would never, ever expect.

Keep your Yuletide music from being just background noise with these songs (they’ll be definitely be conversation starters, too)!

Recently deceased rapper DMX was known for his super gruff voice and equally rough lyrics, so nobody expected him to come out with a Christmas carol cover, much less one that’s known for being super cheery and sing-song. But lo and behold – it actually works! DMX’s signature growl and surprisingly decent singing voice melded together into a total party starter.

It’s unusual enough that bat-eating Black Sabbath frontman Ozzy Osbourne has a carol in his repertoire to begin with, but the fact that it’s a duet with sugary sweet pop star Jessica Simpson makes it all the more bizarre. Will opposites attract? We’ll have you decide.

Who knew that in a galaxy far, far away, there’d be two robots singing the cutest Christmas carol? C3PO and R2D2 have always been inseparable, but doing a holiday duet probably takes their bromance up several notches. (Granted it’s C3PO singing most of the lyrics while R2 is more of an accompanist, but let’s not split hairs on this.)

It’s no surprise that actor Christopher Lee, known for his villainous turns as Dracula, Count Dooku, and Saruman, has a gift for heavy metal. But what is surprising is how good his dark and heavy version of “The Little Drummer Boy” is! If you’re the type to headbang at your Noche Buena, Lee’s covers will make you very, very merry.

Trust William Shatner to turn us all into kitsch lovers. Quite a few already know that the man who played the original Captain James T. Kirk on Star Trek relaunched his career with tongue-in-cheek spoken word covers, and he does not disappoint with this ditty, which also stars ZZ Top frontman Billy Gibbons. If none of these references made sense to you, then you are probably still in college.

Finally, while this is technically not a cover, we couldn’t resist adding RuPaul to our list. Yes, Drag Race fans, RuPaul had his very own Christmas song, and it’s as sassy as you’d expect – perfect for walking down your makeshift runway at home on Christmas eve. Shantay, you sleigh! – Rappler.com

The science of James Bond’s fiction