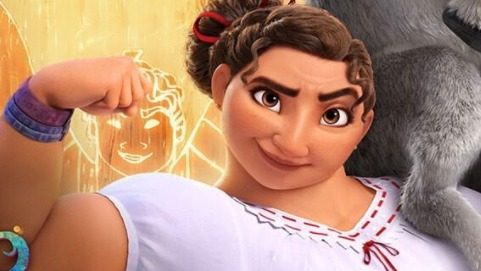 The too-close-to-home middle child (and also sometimes oldest sibling) Disney anthem has finally broken into the top 10 chart list, making Encanto the first-ever Disney animated film to have more than one single on Billboard’s music chart at the same time (Lin-Manuel Miranda didn’t come to play)!

“Surface Pressure” was at the 14th spot last week, but is now at the 10th as of Monday, January 24. Darrow’s solo single, which is about super-strong Luisa’s gripes about her physical and emotional burdens, follows Encanto’s record-breaking “We Don’t Talk About Bruno,” which made history as the first highest-charting Disney hit since 1995. It beat recent titleholder “Let It Go” by Idina Menzel from Frozen. Last week, “We Don’t Talk About Bruno” was at the fourth spot; this week, it climbed to second.

The soundtrack of Encanto, written by Hamilton and In The Heights creator Lin-Manuel Miranda, is Billboard’s number one album for the second consecutive week.

Encanto’s Spanish-language ballad “Dos Oruguitas,” performed by Sebastián Yatra and written by Lin-Manuel, is the only song contender so far for the 2022 Oscars.

Encanto tells the story of the Madrigal family, who possess special powers and live in a magical house in Encanto, a town hidden in Colombia’s mountains. All the boys and girls in the family have unique gifts except Mirabel (Stephanie Beatriz). However, when she discovers that Encanto’s magic is threatened, it falls to her to save her home and family.

Encanto has become one of the most successful animated hits in the pandemic era, earning over $222 million to date worldwide and $93.1 million in the US. It won the Golden Globe Award for Best Animated Feature Film in January. – Rappler.com