MANILA, Philipines – If the late ’90s and early 2000s music scene had a voice, it would probably be some sort of fusion of the voices of Kitchie Nadal, Aia de Leon, Hannah Romawac, Lougee Basabas, Acel Bisa, and Barbie Almalbis.

The six women ruled the airwaves and the gig scene at the time as they fronted some of the era’s most popular and prolific music acts.

Kitchie was the lead vocalist for Mojofly, before successfully pursuing a solo career. Lougee eventually took up the reins as Mojofly’s frontwoman, and has been ever since. Hannah was the frontwoman for Session Road, while Acel led Moonstar88. Aia very famously did lead vocals for Imago, while Barbie fronted Hungry Young Poets (later renamed Barbie’s Cradle) before going solo.

It was their voices that brought to life some of the most enduring Pinoy rock songs: Acel on Moonstar88’s “Torete,” Hannah on Session Road’s “Suntok sa Buwan,” Lougee on Mojofly’s “Mata,” Aia on Imago’s “Sundo,” Kitchie on her original song “Huwag na Huwag Mong Sasabihin,” and Barbie on Barbie’s Cradle’s “Tabing Ilog” – which was also used as the theme song for the hit series of the same name.

Hannah shared in a Rappler Talk interview that it was challenging to be a female musician at the time, because the scene was very male-dominated. The fact that it was very challenging for them only brought the women together.

“It had a lot of challenges. Kasi siyempre (Because of course) the scene was very male-dominated and stuff. But having all these women around gives you confidence kahit na hindi naman kami super close (even if we weren’t super close) before when we were much younger,” she said. 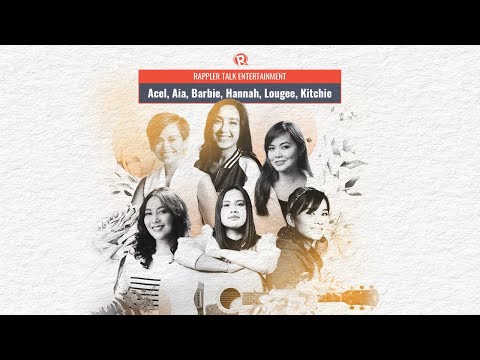 Over two decades later and the music scene could not be more different – but the six women have kept in touch and are still making music.

The group even made headlines recently when they all came together (minus Spain-based Kitchie) for a lunch catch-up organized by Aia. The photos of their lunch that they posted online no doubt stirred the nostalgia in their now aging millennial fanbase, and shortly after, they announced that they would be playing in a one-night show called Tanaw.

Interestingly enough, the show had nothing to do with the lunch – they just really got together to catch up.

“We just shared a meal talaga. A long lunch,” Aia said. After their photos went viral, producers GNN approached them with an idea.

“Actually it was our friends from GNN Productions who reached out to us and said, ‘Guys kung magcoconcert kayo, kami na gagawa ha (if you’re going to do a concert, we’ll do it, okay).’ So then we got excited,” Barbie shared.

“It was lunch to Solaire real quick,” Hannah laughed.

As they prepare to face a new audience at the Theater at Solaire – a stage that’s very different from the intimate gig spaces they ruled in their heyday – they look back at some of the things they miss from the music scene back then.

“Siguro no? Pwede natin isuggest yun – bawal magvideo (Maybe we can suggest that – no videos),” Kitchie added jokingly, as Hannah chimed in saying “Be present.” Aia said that she missed being able to go home after gigs and not experiencing FOMO.

“Pwede kang mawala and wala kang FOMO (You can disappear and you won’t experience FOMO)…there’s nothing compelling you to be in a space wherein you have to be present to be relevant,” she said.

For Hannah, it was the effort that fans made then to catch their shows.

“That part of it I really appreciate kasi yung effort (because of the effort), from their end.” she said.

“And most of them become good friends,” added Kitchie. The other women agreed, and even laughingly pointed out that Hannah met the love of her life that way.

(I miss NU 107 and how involved radio stations were with OPM. I think it’s still this way, but back in those days, we were touching base with them more.)

The simplicity of the music scene then is another thing that Acel misses.

“For me, parang ang simple lang before (it was so simple before)…you create music, you put it out on radio, you perform it live, do campus tours,” she shared.

“Ngayon parang ang daming iniisip (Now, you have to think of a lot of things),” she said. “The social media aspect is like wow, doble doble na yung kailangan mong gawin (your work is doubled).”

As for Barbie – she enjoyed having the space to make mistakes.

“It was a time in our lives na we were still growing, learning a lot of things about life, so along the way we made many mistakes. Siguro namiss ko yung panahon na ang daming nangyari pero walang evidence (Maybe I miss the times when so many things happened but there was no evidence),” Barbie said, as her fellow musicians clapped in agreement.

“There was a lot of grace. Looking into the future, I think if we can still carry that same sense of grace and forgiveness, kahit na may social media, hindi yung magkamali ka lang na isa tapos na, kasi sa total ang dami ko nang mali eh (even if there’s social media, it’s not like you make one mistake and you’re done, because in total I’ve already made so many mistakes)…I hope we can carry that into the future,” she said. – Rappler.com

Tanaw is happening on November 26. Tickets are available via Ticket World.