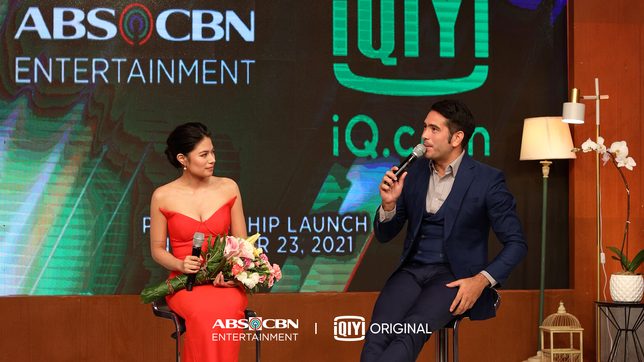 HELLO HEART. Gigi de Lana and Gerald Anderson team up for the first time in a web series.

Online singing sensation Gigi de Lana is adding another feather to her cap with her starring role in the series Hello, Heart.

“First time ko umarte, tapos series pa at lead role pa! Talagang na-pressure ako (It’s my first time acting. And the project is a series and I was given the lead role, too. I felt a lot of pressure),” she said in an online press conference on Tuesday, November 23.

Gigi added that it was a big change for her to go from singing to acting. “Kasi kinalakihan ko ay pagkanta talaga, and ‘yun talaga ang passion ko. Tapos ngayon, nakikilala ako bilang artista, it’s a big accomplishment for me. I’m proud of myself kasi malayo talaga ‘yung pagkanta sa pag-aartista,” she said.

(I grew up singing and that’s really what I’m passionate about. But now that I’m starting with acting, it’s a big accomplishment for me. I’m proud of myself because singing is really far from acting.)

Though she felt pressured, Gigi shared that she was grateful to be entrusted with a huge project for her first acting stint. “It’s a blessing and opportunity for me to learn new things. I was excited.… Alam ko naman na gagawin ko talaga ‘yung best ko. Kahit first time ko ‘to, gagawin ko siya na para bang hindi ko first time. (I knew I would do my best. Even though I’m a newcomer, I will do it like I’m not a beginner).”

Gigi also admitted that she was excited and nervous upon knowing she would be paired with Gerald Anderson for the series.

(We see her singing on YouTube but acting is a different platform. And she delivered an outstanding performance. You can see her effort, her passion, and the heart she put into this project. You really know that she cares for this. She really has a great future ahead in the acting industry.)

And while this marks their first pairing, Gerald said working with Gigi was smooth and easy. “All you can do is to make her comfortable as possible and let the rest happen. Nag-enjoy lang kami (We just enjoyed everything). We feel like we made magic,” he said.

Gigi will play perky and hardworking Heart, the caregiver of Gerald’s character Saul’s grandmother. In order to make his ailing grandmother happy, Saul agreed to faking a relationship with Heart.

Hello, Heart is part of the multi-title content deal iQiyi signed with ABS-CBN. The romantic-comedy series is set to premiere on iQiyi on December 15, with new episodes every week. – Rappler.com