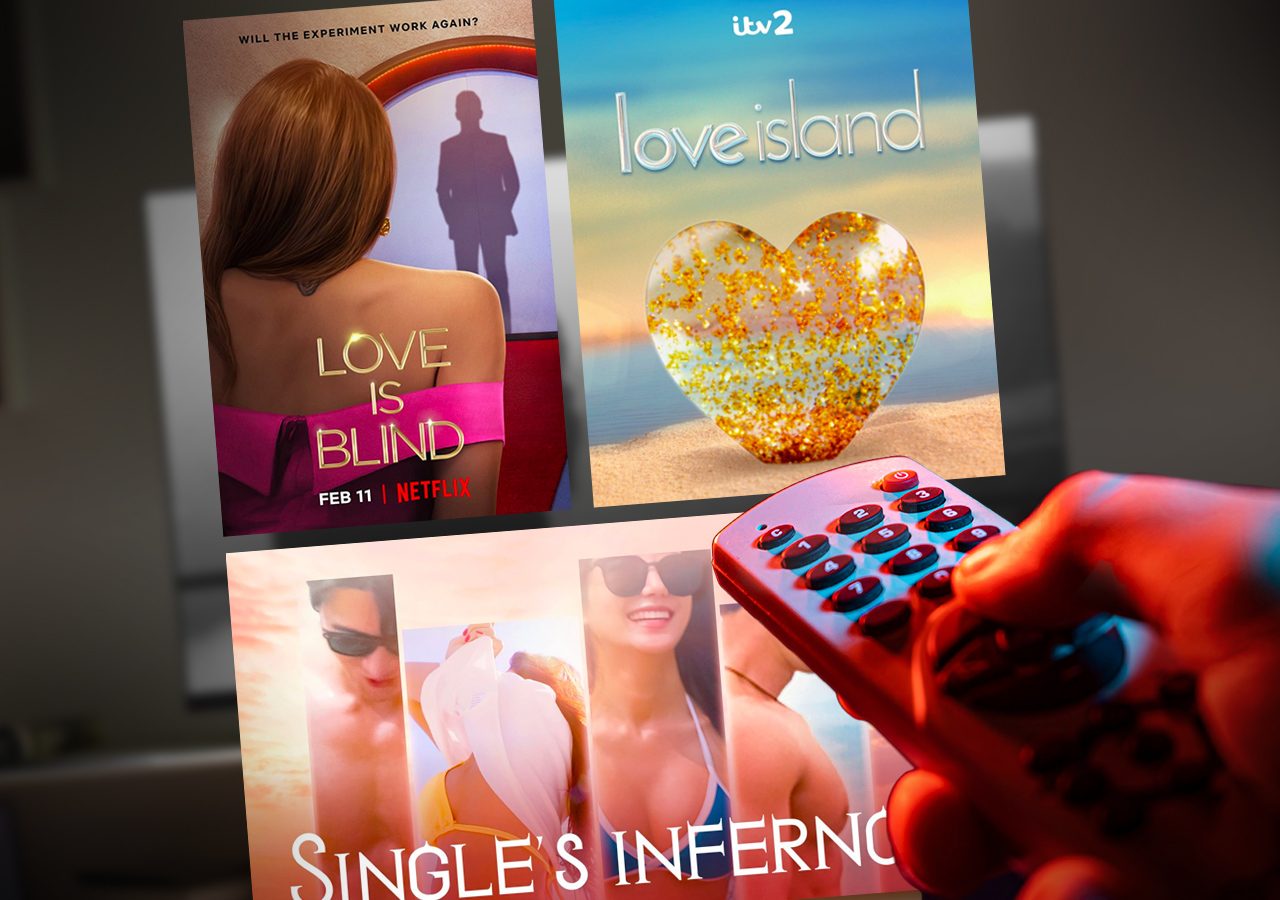 Facebook Twitter Copy URL
Copied
Are you just as obsessed with binge-worthy reality dating shows? Which one is your favorite?

MANILA, Philippines – I’ve watched hot men and women almost die trying not to have sex with each other on Too Hot To Handle, and couples getting engaged through a screen without having seen one another on Love Is Blind. I’ve also witnessed bikini-clad women choosing their half-naked male partners just on first impressions alone on Love Island, and dump them the next day for a hotter new contestant.

On The Ultimatum, I’ve gawked at long-term couples choosing to switch their partner with another, in strange hopes of saving their relationship (or starting a new one) in just two weeks; and I’ve also laughed at how big a deal holding hands for the first time are to hot Koreans on Single’s Inferno.

I’ve probably binged almost all of Netflix’s popular reality dating shows, and I don’t regret a single second of it. Actually, I’m kind of obsessed. And despite the stigma of reality TV being superficial, OA, vapid, scripted, and “a waste of time,” I’m pretty sure I’m on the same boat with many others. We live for the drama and chaos that reality TV unapologetically brings to our screens, and we eat that s** up like it’s an addiction. Yes, it’s trash, but I can’t help it. Why?

“The physiological arousal from drama is exciting; increasing our heart rate, visceral arousal, and leading to the release of endorphins in the brain which are pain-suppressing and pleasure-inducing, not much different than the effect of some drug addictions,” behavioral scientist Dr Juliette Tobias-Webb explained.

It’s true; whenever a new reality show concept is announced on Netflix, consider it already added to My List. With all the time I’ve spent watching these series, I’ve also taken the time to ponder why I and several of my friends just can’t get enough of these binge-worthy shows.

We’re all Marites-es by nature

We’re all suckers for chismis, and reality TV lets us bask and revel in drama and problems that thankfully don’t involve us whatsoever. We get to be third-party marites observers to other people’s chaos, and we get to be scandalized by piping hot tea that we have nothing to do with.

You know how you want to be regularly updated with other people’s problems, but not have a particular stake in the matter? This is reality TV for you. We want to know who’s sleeping with who, who backstabbed who, and even who they are outside of the show. Being allowed a microscopic peek into strangers’ lives is strangely satisfying, and temporarily fulfills our need to focus on other people’s issues instead of our own.

We get to live vicariously!

It’s reality, yet an escape from our very own. Reality TV is like a risk-free chance to live vicariously through the lives of the series’ participants, especially through those you grow to be invested in, or see yourself in. My obsession with reality TV started in the pandemic, mainly because I needed a way to take my mind off of the current bleak reality of the lockdown. My brain needed a getaway, and reality TV provided that. I mean, watching couples fall in love in the weirdest settings while hanging out in bikinis and trunks all day was a nice escape from being stuck at home because of a raging virus.

What is it like to live in a tropical villa surrounded by a bunch of hot guys? Can I just pretend that I have a smoking hot body with three good-looking men fighting over me? How does it feel to be completely single and engaging in risky behaviors that I would never ever dare to do in real life? What are the consequences of these bad decisions? I didn’t have to find out myself – I just needed to watch the next episode!

As a graduate of psychology, watching toxic couples onscreen allows me to analyze various relationship dynamics that I would never be able to witness in my boring real life. Dishing out psychological armchair diagnoses to myself and with my friends is a fond pastime, and in a way, makes me also feel better about my vanilla life and appreciate my steady relationship. My friends and I bond over getting together to passionately discuss these chaotic and messy relationships, and bet on which couple is going to make it, which ones won’t, and our own theories as to why.

The finales of these dating shows are a grand event for us too – the intense way we all gather in person just to watch a finale reminds me of those Manny Pacquaio matches we used to watch with our families circa mid-2000s. In the pandemic, we would stream the final episode and watch it together, pretending to be shocked that this couple didn’t choose each other, and then letting the results of the show affect us way more than it should. So fun!

It’s fictionalized reality, candid authenticity, and just sheer entertainment, basically. There’s fun in cheering for the participants you like, rooting for a couple’s success, or bitching about that home-wrecker who can’t seem to get booted out. It’s entertaining to see how crazy some Americans can get, or what kind of plot twists combining multiple big personalities under one roof can bring about. Reality TV is just an unfiltered zoom-in on human nature in the trashiest, most gripping, and most chaotic way possible.

Sometimes, we all just need a break from serial killer documentaries and true crime – and reality TV is the best break for me. It’s light, easygoing fun that doesn’t take much to get absorbed in; nothing is too heavy, too dire, dark, or deep. There’s no need to exert a lot of brainpower to follow a storyline, since most of these titles are background shows anyway, and it’s a great way to veg out and turn off your brain after a stressful day. And if that’s not a good enough reason to love reality TV, then I don’t know what is! – Rappler.com