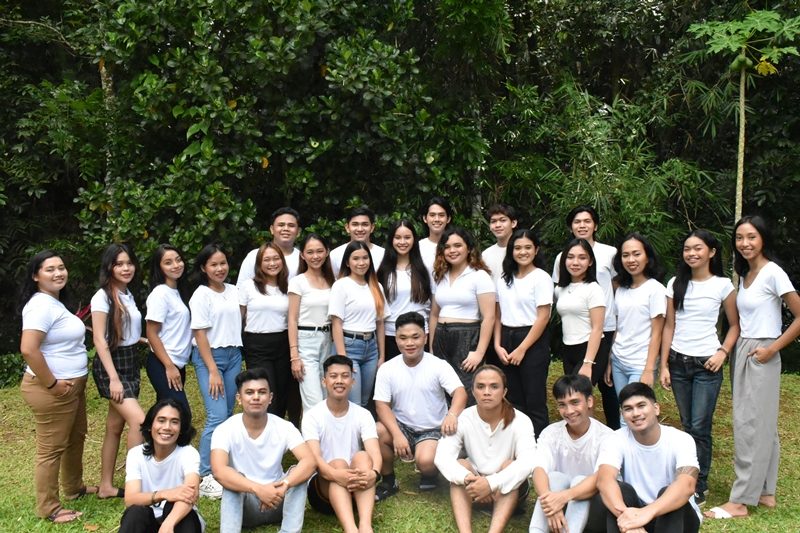 PLAY. The cast of Ang Paglaya-The Musical will stage the play in time of the annual Higalaay Festival in Cagayan de Oro this August.

Facebook Twitter Copy URL
Copied
'Ang Paglaya: The Musical' tackles an issue that many can relate with – what parents want their children to take up in college versus what their children are really passionate about

Written and directed by Maia Fortich-Poblete, Ang Paglaya: The Musical focuses on the protagonist Annika’s various relationships – her struggle to free herself from her domineering father Manuel, her longing for her mother Anna, and her journey to discovering her true identity.

The piece starts at Manuel’s house but later segues to a mythical world of diwatas, engkantos, and duwendes (fairies, wizards, and dwarfs).

“It tackles an issue that many can relate with – what parents want their children to take up in college versus what their children are really passionate about,” Poblete said.

She added, “To add a bit of excitement to our play, we featured an enchanted forest, some Filipino mythical creatures, and a strange family whose only intention is to do good.”

Ang Paglaya was first staged by Oro Teatro Bulawanon (OTB) as a one-act play co-written by Poblete with Bex Espino at Tanghalan sa Kampo Juan, a series of three cultural and culinary evenings celebrating the arts, music, culture, and cuisine of Northern Mindanao at the Kampo Juan Eco-Adventure Farm and Heritage Resort in Manolo Fortich, Bukidnon, in May 2019.

In 2021, Poblete joined Sulat Dula, a playwriting workshop commissioned by the National Commission for Culture and the Arts (NCCA), where she was encouraged to reformat the play into a musical. The reworking was completed in May 2022.

Ang Paglaya: The Musical features 13 original songs written, arranged, and composed by some of the cast members.

“It’s good to know it’s been made into a formally staged musical since that would mean the production values would be much better than their first iteration three years ago,” said Jonathan Cabrera, who produced Tanghalan sa Kampo Juan. “Also, with much more time to prepare, it can only get much better, and I wish them the best for their upcoming performance.”

Savior, who once served as a regional committee member of the NCCA’s National Committee on Dramatic Arts and National Committee on Cinema, said the workshop panelists were the ones who asked Poblete to explore the possibility of turning Ang Paglaya into a full-length musical since it already featured songs and dances.

“While we’ve been doing productions since 2013, we only formally named our group in 2016, in time for our staging of my mom’s play Reyna Elena,” said Poblete.

Her mother, the late playwright and columnist Ma. Soledad “Chic” Nery-Fortich, was behind the full-length play Reyna Elena, which won second place in the 1983 Palanca Memorial Awards for Literature.

Fortich’s other stage credits include being the writer, lyricist, and director of the original Binisaya musical Ay Kasing Ko staged at the Manila Metropolitan Theater’s Dalubdulaan in 1987 and the XU Little Theater in 1989.

She was also the co-writer for Labaw sa Bulawan: A Musical Tribute to Visayan Songs and Songwriters, a musical variety show staged at the City Tourism Hall and Grand Caprice in Cagayan de Oro in the early 1990s. It was directed by the late Nestor U. Torre.

The Oro Teatro Bulawanon has been staging Eve Ensler’s The Vagina Monologues every year as part of its advocacy to raise awareness about violence against women.

The group has also been a part of several stagings of Lima: HIV Monologues, as part of a campaign to raise HIV and AIDS awareness.

“It is the group’s advocacy to help aspiring young performers find their place in the theater scene in Cagayan de Oro. So OTB took in several senior high school students as performers for The Vagina Monologues, which had performances at Rodelsa Hall, Superstar KTV, USTP, and in Balingasag, Misamis Oriental,” Poblete said.

They lead a cast of over a dozen people.

Ang Paglaya: The Musical will be staged in partnership with Liceo de Cagayan University as one of the featured events for this year’s Higalaay Festival, Cagayan de Oro’s annual fiesta celebration this August.

Produced by 7HS Productions and Oro Teatro Bulawanon, Ang Paglaya will be staged at the Rodelsa Hall in Cagayan de Oro on August 5 and August 6, with a matinee at 3 pm and a gala premiere at 7 pm.

The proceeds will be for the benefit of the Liceo U High School Alumni humanitarian and special projects. – Rappler.com