When the young decide to join government

Feb 5, 2012 2:36 PM PHT
Candice Lopez-quimpo
Facebook Twitter Copy URL
Copied
Idealism can play a vital role in the ways of the bureaucracy, now more than ever.

“My heart does the moves like Jagger whenever the Senator now casually interjects design jargon and principles during meetings, or personally insists that we incorporate design solutions into his projects,” says Arriane Serafico. “That’s one of my proudest achievements, I would say. To have taken baby steps into making the government more innovative-thinking, in my own little way.”

Wide-eyed, cheerful, and optimistic, Arriane speaks about good governance and lobbying for laws with as much enthusiasm as she would about her favorite K-Pop superstar or a fashion find like any other young girl her age. Unlike other 23-year-olds, Arriane has plunged herself elbow-deep into government work.

She works as as a consultant “for all things in the vicinity of new media, design/creative industries, and youth activities” for Senator TG Guingona.

Like many young graduates, Arriane looks at the world with the hope that she can make a difference by taking an active role. Nixing the idea of climbing the corporate ladder, the first idea was to join an NGO, specifically, Kaya Natin, a movement for good governance and ethical leadership.

“It was a black hole from there. I fell in love with the message and vision of Kaya Natin,” Arriane recalls.

It was there that she met Guingona, then the Bukidnon Representative in Congress, who was championing the movement’s ideals of good governance and ethical leadership. When he needed a youth coordinator for his senatorial campaign, Arriane found herself in the middle of it. The unintentional, seemingly random turn of events ended with a job she hadn’t planning for.

Arriane shares, “I just wanted to be part of the campaign fever back then, you know, to have something to tell the grandkids. Little did I know that I would find my element there, not to mention a very empowering working environment. When he won a seat in the Senate, I was offered to stay on, and that decision was a no-brainer.”

The path to government work is quite different for another. Brian Ong who works for the Department of Tourism’s (DOT) Office of Marketing Communications. This 23-year-old had planned to end up in government. His path was fairly clear-cut.

“I sent out my CV to various government offices which interest me, like the Office of the President, Presidential Management Staff, Department of Budget and Management, Senate, Department of Finance, Board of Investments, and the Department of Tourism. It’s just fortunate that DOT responded first, and I accepted their offer.”

Working for the DOT has its perks, one obviously being the amount of travel involved. Since Brian works as a creative writer for the department–this includes press releases, speeches, and material for media–he gets to see the different part of the country.

Still, the glamorous depiction belies the work and criticism that fall upon working for an office in public service and in the public eye. In his 2 years with the DOT, Brian has already worked under 2 DOT Secretaries and through the transition.

“I came in at the DOT at a time when people were criticizing,” Brian reveals, referring to the controversial Pilipinas Kay Ganda tourism campaign under the former DOT Secretary Alberto Lim. “I stayed because it’s not really about who’s on top, who’s the Secretary. My passion and desire to serve transcends politics and all that. What’s important is you see the programs and policies through, you contribute for the betterment of the industry, of the people.”

Arriane puts in her own spin on the situation.

“I have to say, politics can get really stressful,” Arriane confesses. “Unlike before, when you only have to deal with critics on the 3 pillars of traditional media (newspaper, TV, radio), these days, everyone has something to say, wants to be heard and CAN be heard–regardless if their opinion is adequately informed or not.”

That critics and naysayers come with the territory are a given. For the young and idealistic, these challenges can be distressing. Initially, anyway. A healthy dose of perspective and a clear idea of why they are on board in the first place keep people like Arriane and Brian forging ahead.

Arriane points out a curious way of looking at things. “Don’t think of it as an act of martyrdom, or the ultimate self-sacrifice,” she admonishes. Admitting to be one to have done that, she pushes that work in government is just like any other job–whether corporate, creative, or NGO–where she is expected to perform at her best.

This means that she also has to prove her worth, albeit her inexperience. In fact, her youth has her spouting ideas with “fires all ablaze.” Whether these ideas actually hold any water, the brashness that comes with such a young age arms her with the confidence to push for far-reaching, out-of-the-box notions.

Some of these catch her flat on her face. But others do become project. Her monumental contribution came with her initiation of the Design Competitiveness Act of the Philippines, which is scheduled enter into its 2nd reading in the Senate this February. Talk about learning on the job: in no time, Arriane had to learn to become a lobbyist with a strong case for design as a crucial component of national development strategy.

Her youth also reveals her generation’s lifestyle. This very bill actually found its seeds in a Twitter exchange with design house Team Manila’s Jowee Alviar. He posited, “How can we collaborate with the Senator for the local creative industry?” Arriane took it from there. She took Sen. Guingona to discussions with the leaders in the design industry (including those in fashion, graphic design, visual design, and advertising, among others) who were willing to collaborate with the government.

“My biggest goal for this year is to have this passed into legislation within 2012,” a motivated Arriane says, “so I really have my work cut out for me! My passion and conviction for this is made all the more stronger because it’s not just a task or a job for me, but it’s something that I really, really believe in and is very close to my heart.” 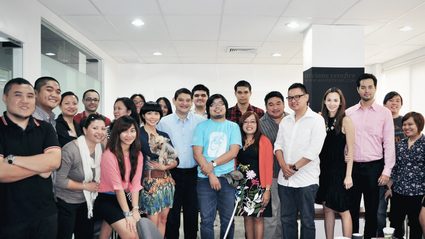 After all, being on the precipice of change is one of the things being young is about. Change, with its demand for daringness, bold decisions and shifting paradigms, is something that the youth seem to thrive on. Brian is no different.

Brian is in the middle of a revitalized DOT, what with Secretary Mon Jimenez’s appointment and quick-catching viral tourism campaign. He is visibly excited about the possibilities and the role he plays.

“It’s more fun now,” Brian enthuses. “Especially that you know that you’re in the forefront of a new marketing communications campaign for the Philippines, that will help drive more for Philippine economy. I have been given free hand to explore social media in order to help meet our objectives to connect with the Filipino people about our programs, projects, and activities.” It may sound risky to put such young, arguably green people in charge of significant responsibilities with such a wide public reach. Arriane and Brian know that their youth may keep them lacking in practical experience, but they confidently position themselves as the link between the public. Since they are new to the government’s bureaucratic system, they are the ones who air the side of the public and report the preconceived notions about the government. Think about it: the youth made up more than half of last election’s registered voters.

And what they lack in experience they more than make up in their idealism to fuel their ideas and to keep their spirits up. They are also pragmatic about what they don’t know, placing a value on having someone to learn from and look up to.

“Secretary Lim was very hard working, very professional and ‘tuwid’. And now with Secretary Jimenez, I see the same,” shares Brian. “He’s very warm, hardworking and the man who will get us 10 million tourists by the end of 2016.”

Arriane reflects, “I’ve found that in working in the government or NGO industry, one of the most important factors you should look for is a good mentor. Even if you’re passionate about the cause, if you have no one to guide you, especially in the beginning, it’s way too easy to get disheartened and jaded.”

Challenges notwithstanding, Arriane and Brian attest that, at the very least, the work is not boring. Perhaps it is luck or perhaps it is in the decisions they’ve made, but both paint a very inviting picture of their days.

Arriane workdays have her designing, editing videos, researching, writing speeches, attending meetings, planning projects, and organizing events. “My activities always depend on whatever is needed, how much I’m willing to do and learn. My projects almost always depend on what I initiate. And that is what I’m most thankful for: that my working environment, not to mention my boss/mentor, encourages initiative and new ideas.”

Brian’s typical day “starts with a cup of coffee. I monitor all the news about the DOT, the Secretary, Philippine Tourism and related news. I engage the online public in tourism related ideas. Update the DOT Twitter and Facebook sites. Write messages or press releases when necessary. Think of grand ideas to change this nation. All these while listening to music, and occasional laughter and tsismis on the side.”

And it is on these notes that they invite the nation’s young and brightest to consider their world.

“Working in government is challenging, fun and enlightening,” claims Brian. “The government needs young bloods, creative people, scientists, artists, designers, writers, and all the best of the best in order for it to be and do better. Instead of complaining, I think it’s better that you yourself contribute to the solution. And if you’re learned, and an expert on what you do, the more responsibility is passed on to you; the more you should go onboard or help in your capacity.”

Arriane goes as far as to challenge one’s expectations of government. “Remember: we deserve the kind of service we demand. So, set high standards and demand more from your officials – even your local ones! If everyone just lets things slide and adopt the “Eh ano pa nga bang maaasahan mo sa gobyerno?” mindset all the time, then what do you expect? This only gives the government license to stay the way it is: mediocre. Changing the world doesn’t have to mean you can’t be true to yourself, or sacrifice your personal growth and development for a higher purpose. If you think you can find that balance through working in or with the government, then welcome to the family, I would love to meet you.”

She adds an escape clause, “If not–that’s okay. You can always change the game your own way.” – Rappler.com; photos courtesy of Arriane Serafico and Brian Ong