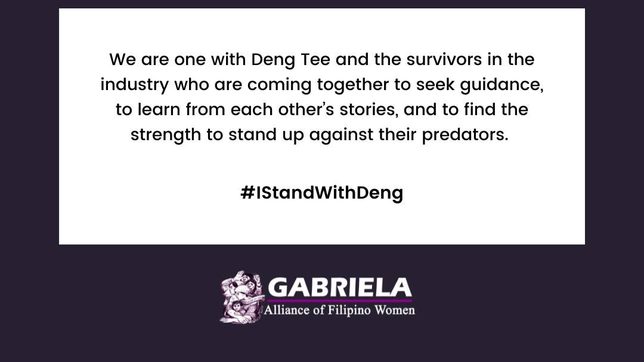 SUPPORT. Gabriela releases a statement pledging support for ad industry creative director Deng Tee, who has spoken out against sexual harassment in the industry.

“GABRIELA stands in solidarity with Deng Tee and the rest of the women in the advertising industry who have found the courage to come forward and support fellow victims of sexual abuse in the industry,” the group said in a statement posted on Facebook on Thursday, September 23.

On August 12, Deng took to Facebook to detail an encounter with Herbert at an ad agency festival in 2015, where he allegedly invited her to his hotel room and continued to send her messages after she declined.

Deng’s post – written in the wake of the controversial Belo ad made by GIGIL – sparked a conversation on sexual harassment in the ad industry, and, according to Gabriela, “unleashed a wave of many other sexual harassment accusations against Hernandez.”

According to Campaign Asia, Herbert filed a cyber libel complaint against Deng over her post on August 26.

Herbert, who is also known as the guitarist of bands 6cyclemind and Moonstar88, appears to have stepped down as GIGIL’s founding partner, with his LinkedIn account showing that he held the position until August 2021.

Gabriela, in the statement, said they have spoken to five other women who reported being sexually harassed by Herbert.

“Disturbingly, we have learned that Deng’s story was not the first case of sexual harassment by Hernandez to be reported. Prior reported incidents of sexual violence by Hernandez were apparently swept under the rug by his previous agency,” they said.

“Whether by intimidation, non-disclosure agreements, or lawsuits not unlike what Deng Tee now reportedly faces, it is clear that women victims of sexual abuse in the workplace continue to be systematically silenced by their predators who hold power and authority in the workplace,” Gabriela said.

“We are one with Deng Tee and the survivors in the industry who are coming together to seek guidance, to learn from each other’s stories, and to find the strength to stand up against their predators,” they continued.

Rappler reached out to Deng, but she declined to comment at this time. We have also contacted Herbert, but have yet to get a response. – Rappler.com