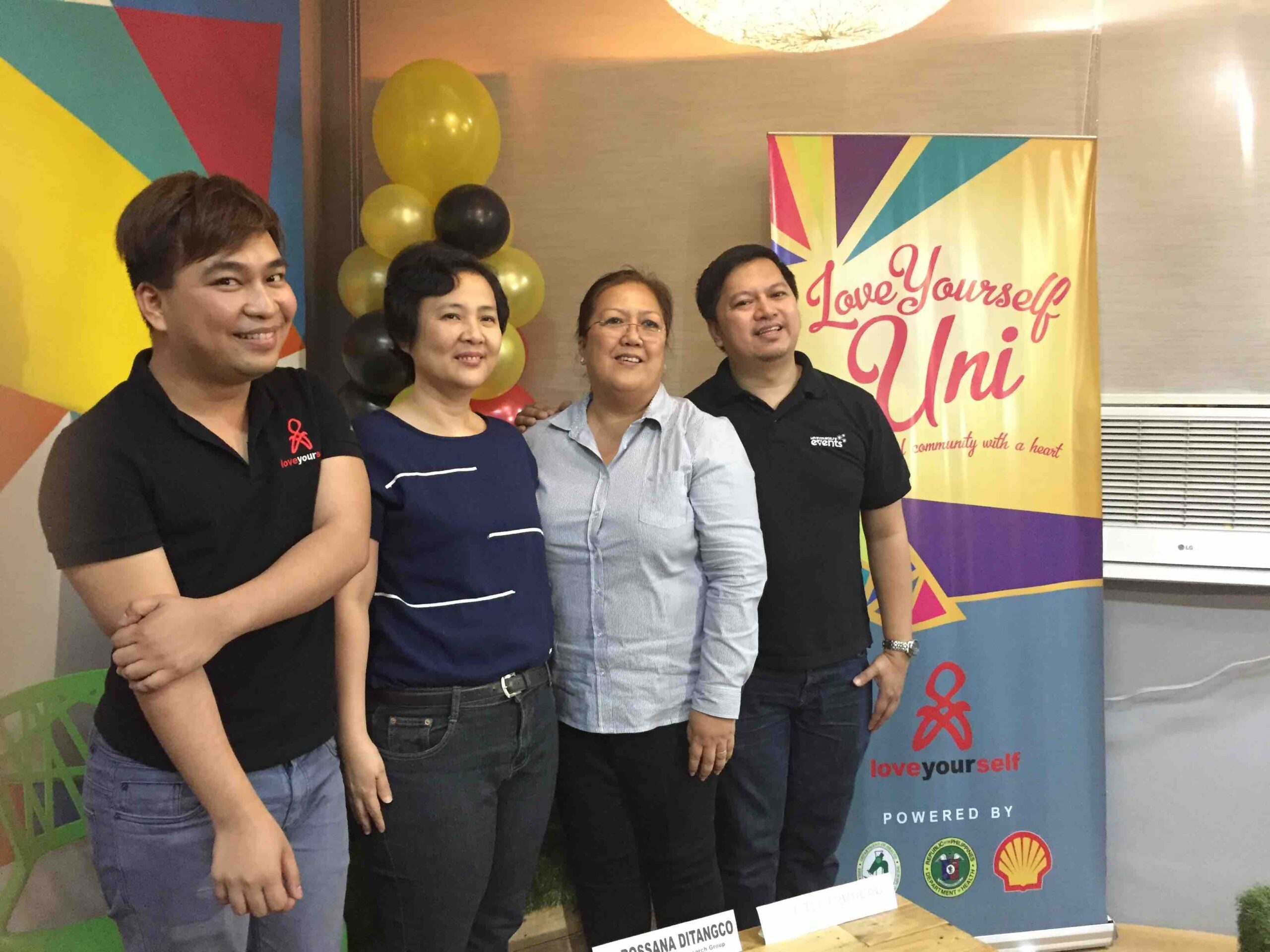 Facebook Twitter Copy URL
Copied
LoveYourself Uni also functions as a community center where people can hang out in a safe, non-judgmental environment

MANILA, Philippines – The significant number of new human immunodeficiency virus (HIV) infections clustering around young men who have sex with men (MSM) between the ages 12 to 29 calls for interventions that target this demographic.

This was the finding of a study conducted by the LoveYourself HIV clinics from 2012 to 2015. The study was released on February 13 at the soft opening of the LoveYourself Uni HIV Testing and Community Center along Taft Avenue in Manila.

“During this period, we tested over 21,740 clients. From that number, 4,096 were reactive or diagnosed to be positive for HIV. The incidence density is about 6.1,” revealed LoveYourself founder and executive director Ronivin Pagtakhan.

Drawing a comparison with neighboring Thailand, Pagtakhan said that overall incidence density in Bangkok was reported to be 5.9 in 2013.

The segment that tested positive was further segregated by age group, revealing that the highest incidence density of HIV was among 15 to 22 year olds at 8.5. This was followed by the 23 to 28 age group at 5.6, and lastly, among those aged 29 and above at 4.8.

“Our testing sites show that the highest incidence of HIV are among the youth – the MSM experimentation phase,” said Pagtakhan.

“New more youth-friendly interventions are needed to reach this age group before infection rates get even higher,” Pagtakhan stressed.

How can we encourage them to know their status and seek treatment if they cannot access HIV testing?

“We follow this ethical principle in medicine – it is unethical to deny a minor a life-saving intervention simply because he does not have the legal capacity to provide informed consent,” said Dr Rossanna Ditangco, chief of the HIV/AIDS research program at the Research Institute for Tropical Medicine (RITM), the largest HIV treatment hub in the country and the medical partner of LoveYourself.

“Secondly, we follow the ‘Captain of the Ship’ principle which states that the highest officer in the health facility can take on the responsibility of providing life-saving intervention to those who cannot provide informed consent. I am the highest ranking officer in this health facility, and I can take on the responsibility of this life-saving intervention for the minor,” Ditangco added.

The entire concept of LoveYourself Uni is meant to appeal to a young audience. The name itself “LoveYourself Uni” is a play on “uni” – meaning university – and, as Pagtakhan explained, a play on “you n I” or “you and me.”

The set–up and design of the reception room has a youthful vibe and feel.

The soft faux grass that lines the seating pods and the multi-colored mural are a pleasing study in contrasts.

“We call the seats the green, green grass of hope; and the mural is filled with triangles that symbolize our triangle of self-care principle,” said Chris Lagman, co-founder of LoveYourself.

C – correct and consistent use of condoms and lubricant

In the tradition of the Love Yourself Treatment Hubs (the other LoveYourself HIV Testing and Community Center along Shaw Boulevard has the same cozy homey feel but with different design elements), the design is meant to be welcoming, comforting, and private.

“If you look at the way the seating pods are structured, it is not facing the entrance. People can come in without being noticed,” said Lagman about the center’s functional design that is meant to give privacy and a sense of anonymity.

Counseling rooms are set up for closed door one-on-one sessions where clients can get their test results and discuss them with their counselor in utmost privacy.

The two LoveYourself hubs are powered by over 600 trained volunteer counselors, while its operations are funded by the Department of Health (DOH) with RITM providing laboratory and technical expertise.

“I’m very proud that the DOH and RITM have invested in interventions like LoveYourself. We can see that it is working,” said Ditangco.

From 2011 to 2015, LoveYourself has served over 30,000 clients and has engaged over 20,000 people through its online and social media support platforms.

Apart from functioning as a testing center where any one can get free HIV testing counseling, the LoveYourself Uni also functions as a community center where people can hang out in a safe and non-judgmental environment.

Pagtakhan and Lagman hope that the clinic set-up, design, and even its location (accessible and close to university areas in Manila) will encourage young people to get tested and know their status.

“We want to make HIV testing a regular part of your routine like getting your haircut, especially if you are sexually active,” said Pagtakhan, emphasizing that getting tested 3 times a year is a good practice.

Other HIV interventions include engaging the business sector and helping them formulate their own HIV in Workplace Policy through their partner, Pilipinas Shell Foundation.

“When I saw in 2009 that the number of HIV cases was rising in Metro Manila and among the age group of 24 to 29, I thought, then they must be working. There was a need for us to engage the business sector,” said Marvi Trudeau, program manager at Pilipinas Shell Foundation.

According to Trudeau, together with LoveYourself and the DOH, the foundation has been able to assist 179 companies formulated their own HIV Workplace Policy in compliance with the provisions of the HIV/AIDS Prevention Act of 1998.

Apart from this, administering Pre-exposure prophylaxsis (PrEP) combined with condoms as an HIV prevention tool is also being explored.

PrEP is a pill regimen that can be used to treat people who do not have HIV but are at high risk for getting infected.

LoveYourself, in cooperation with the DOH and the World Health Organization (WHO), hopes to make PrEP available as a prevention option within the year. – Rappler.com

Visit the Love Yourself Uni at 2028 Taft Avenue Extension, Pasay City. It is conveniently near the LRT-1 Gil Puyat or Buendia Station on the northbound lane of Taft Avenue. Check out their Facebook page for more details.