Facing the dangers of a warmer world 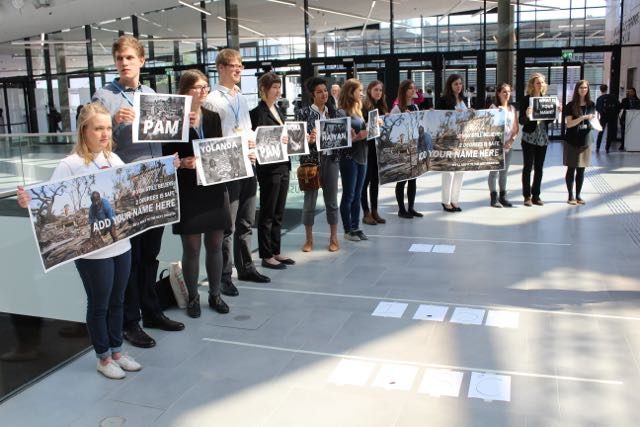 Facebook Twitter Copy URL
Copied
A UN report released earlier this year states that climate change accounts for 87% of disasters worldwide. This figure comes with only 0.8 degrees celcius of global temperature rise that we are now experiencing

MANILA, Philippines – In the wake of the G7’s announcement to limit global warming to 2 degrees, UN climate negotiators from the world’s most vulnerable nations have questioned whether 2 degrees is too dangerous.

Unfortunately, their call to focus efforts on limiting global warming to 1.5 degrees were blocked today by some of the most powerful nations at the UN climate talks: India, China and Saudi Arabia. (READ: Crunch issues for climate negotiators)

Care International’s Sven Harmeling has labelled this move “highly concerning,” especially given the human rights implications of a 2-degree target.

This concern turned to protest on June 11 as young people gathered at the UN with banners of tropical storms. They then asked negotiators to “add their name here” if they believed that a 2 degree world was safe, noting that they would use their names for the “future disasters of a 2-degree world.”

Last week a group of global human rights experts, highlighted what they called the “human rights” implications of a 2 degree rise, calling it “the greatest human rights challenge of our generation.”

They argued in line with the most recent report from the Intergovernmental Panel on Climate Change (IPCC) that people who are currently “marginalized are especially vulnerable to climate change,” even at only 2 degrees of warming.

A UN report released earlier this year states that climate change accounts for 87% of disasters worldwide. This figure, it must be remembered, comes with only 0.8 degrees celcius of global temperature rise that we are now experiencing.

However, scientists are largely uncertain what the impacts of a doubling of the current warming could be. Those countries most vulnerable to the impacts of climate change have been concerned about the reality of 2 degrees of warming since the UN climate talks began.

PH fights for less than the 2 degrees target

As the Philippines Climate Change Commissioner, Mary Ann Lucille Sering argued earlier this year, “How can we possibly subscribe to more than double current warming given what less than 1 degree Celsius has entailed?”

Sering currently heads a group of countries within the UN climate talks known as the Climate Vulnerable Forum, who argue that the 2-degree target, reinforced by leaders of the G7 this week, is “inadequate, posing serious threats for fundamental human rights, labor and migration and displacement.” (READ: Philippines, 12 Asian countries set agenda for climate talks)

Sering and other leaders of the Climate Vulnerable Forum commissioned a human rights inquiry into the 2 degree target earlier this year that has highlighted the severe impacts of 2 degrees for poor and marginalized groups around the world.

John Knox, who lead the inquiry as the UN Special Rapporteur for Human Rights and the Environment argued that “Even moving from one to two degrees of warming negatively affects the full enjoyment of a wide range of human rights.”

He further believes it will have a multiplying impact on human rights around the world, and make it very difficult for countries to “respect, protect and promote human rights.”

These reports, and the current state of the UN climate negotiations around the 2 degree target have shone light once again on the importance of showing support to developing countries that will face the ongoing impacts of global warming.

The Philippines is known to be one of the most vulnerable countries to climate change, along with other small island nations and developing countries. When Typhoon Yolanda hit the country in 2013, more than 6,000 people died and millions were affected, losing their homes and livelihood. Post-disaster problems such as human trafficking was also recorded.

According to Oxfam, climate change is the number one threat to overcoming poverty. Many Filipinos undergo a cycle of building and rebuilding their lives only to be continually destroyed by climate change impacts.

At less than one degree warming, the Philippines is facing extreme weather conditions, warming waters, drought, and sea level rise. What this means is that the Philippines must be prepared to face more Yolandas, less food production due to low adaptive capacity of farmers and fisherfolks, and more migration as islands sink under water.

Is the country prepared to face these? (READ: 100% crop damage reported in parts of Mindanao due to drought)

Within the UN climate negotiations, many fear that financial support for adaptation and the damages that cannot be adapted to will not meet the required targets. This is what led negotiators and civil society actors to stage a protest today in the UN climate talks demanding that negotiators not only recognize the importance of limiting global warming to 1.5 degrees, but also reinvigorate negotiations to better support the inevitable damages that will result.

Interestingly, this has been one of the key negotiating points for India over the years. However, with its plans to push ahead with its controversial coal plant in the pristine Sundarbands region of Bangladesh, and ban NGO’s from criticizing, it may indeed be set on a development path that is at odds with its developing country partners.

In addition, the Philippines must look into its own plans for clean and renewable energy. With more coal power plants set to be opened in many different parts of the country, the question of sincerity on the government’s call for reducing carbon emission remains questionable.

It is only a matter of time before the true “reality” of a warming world sets in. – Rappler.com

Renee Juliene Karunungan, 25, is the Program Manager for Advocacy of Dakila, an organization of artists creatively inspiring social transformation. Together with Oxfam, Dakila led a campaign called Tiktok Pilipinas in the run-up to the Copenhagen climate talks in 2009.