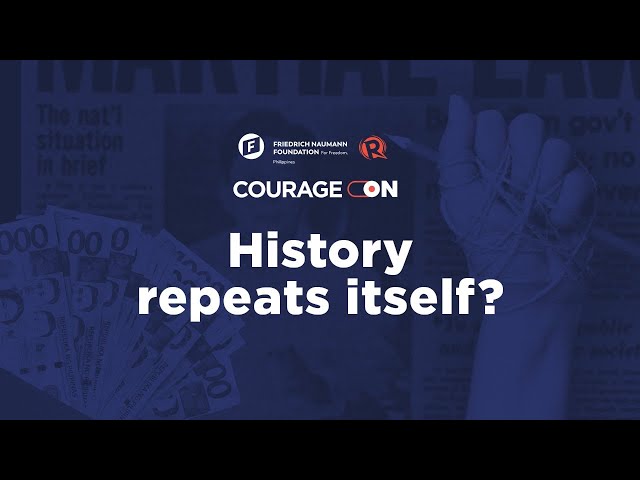 Facebook Twitter Copy URL
Copied
50 years after Martial Law, are we seeing history repeat itself? We explore this and more in the #CourageON community show happening on Wednesday, September 21, at 4 pm.

MANILA, Philippines – It has been 50 years since the late dictator Ferdinand E. Marcos declared Martial Law. That day shoved the country into almost a decade of ruthless military rule.

During this benighted period, freedom of speech was suppressed and human rights were outright violated. Marcos formally ended Martial Law on January 17, 1981, but it was not until 1986 when democracy was restored – after the dictator and his family were forced into exile, overthrown by a popular uprising that came to be known as the People Power Revolution.

As the Philippines marks the golden anniversary of the declaration of Martial Law, the country is seeing yet another Marcos at the helm. Ferdinand “Bongbong” Marcos Jr, now the Philippine President, is reaping the benefits of long-term campaign disinformation that not only whitewashed the atrocities under Martial Law but also targeted critics and political opponents, among others.

Fifty years after, many are seeing similarities between what happened then and the Philippines’ current situation. Several journalists and media organizations, for instance, have slammed efforts to stifle press freedom and independent journalism. Media organizations in Southeast Asia recently called on the Philippine leader to ensure press freedom and protection of media workers in the country.

Aside from Marcos Jr. refusing to join presidential debates and interviews, his camp was known to block and sideline journalists who asked tough questions during the presidential campaign.

Human rights advocates and critics are once again being targeted and being red-tagged.

Decades after Martial Law, are we seeing history repeat itself? What can we do to ensure we learn from our history?

We answer these and more in “#CourageON: History repeats itself?” on Wednesday, September 21, at 4 pm.

The show will feature the following speakers:

This episode will be hosted by Jules Guiang, Rappler’s head of community.

The community show, organized by Rappler’s civic engagement arm MovePH in partnership with Friedrich Naumann Foundation for Freedom, aims to put the spotlight on pressing issues in the Philippines and the ways we can take collective action on them. This episode in particular is also part of MovePH’s campaign #SaysayNgKasaysayan which aims to combat online disinformation and historical distortion. – Rappler.com