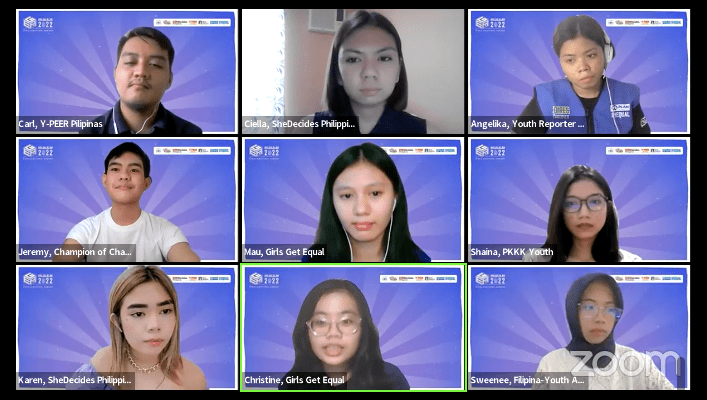 HIJALALAN. Representatives of different youth groups come together to launch the #HIJAlalan2022 campaign and its 10-point electoral agenda for girls and young women on February 24, 2022.

Facebook Twitter Copy URL
Copied
The groups challenge candidates in the 2022 elections to prioritize the rights of children and young women, a vulnerable sector in the Philippines

MANILA, Philippines – A few days ahead of Women’s Month beginning on Tuesday, March 1, youth groups from around the Philippines challenged political contenders in the 2022 elections to push for young women and girls’ rights in a 10-point electoral agenda.

The agenda, covering the “most pressing” issues concerning children, girls, and young women in the country, “aims to ensure that [their rights] will be at the forefront of politicians’ general plan of action,” the organizations said in a statement.

The agenda was backed by at least 35 youth-led organizations such as Plan International and SheDecides Philippines, and over 240 children and youth.

They also launched a campaign called #HIJAlalan2022 urging the Philippines’ future leaders to prioritize young women’s leadership, freedom, and representation in the country’s national and local policy, program, and budget.

These are their demands:

The groups said that the agenda was crafted after a series of regional consultations conducted from January to early February.

(Let’s raise the discussion on girls’ rights. We [girls] are not given enough platforms to speak about our experiences and opinions. Let’s listen to the girls in our communities. Let’s hear their stories about their daily lives.)

“How long should we remain silent while children and girls’ rights are ignored?” added Shaina, whose last name was also withheld.

Other notable groups joining #HIJAlalan2022 include the Center for Youth Advocacy and Networking (CYAN), Youth Reporters, and Y-PEER Pilipinas.

The presidential candidates have yet to outline specific policy plans for girls and young women. While some like socialist labor leader Leody de Guzman and Vice President Leni Robredo have advocated for platforms relating to gender equality and non-discrimination, the protection of children and young girls is another set of complex issues the country’s future leaders must pay attention to.

The Philippines has been labeled as a hotspot for online sexual exploitation of children, and minors have been involved in labor trafficking.

Teenage pregnancy, while seeing a decline amid the pandemic, remains an issue because of inadequate comprehensive sexuality education, and the stigma in accessing sexual and reproductive health services and contraceptives.

In January 2022, the sector celebrated as the Philippines finally banned child marriage after a long battle by advocates. – Rappler.com