Feb 20, 2016 9:00 PM PHT
Raymon Dullana
Facebook Twitter Copy URL
Copied
The Sinagtala class was the first to graduate from the PMA after the restoration of Philippine democracy in 1986, and the first batch of new military officers to serve the administration of the late President Corazon Aquino BAGUIO CITY, Philippines – Thirty years after they tossed their hats into the air, members of the Philippine Military Academy’s Sinagtala Class of 1986 looked back on the lessons of the popular revolution that they witnessed, and more important, supported.

The Sinagtala class was the first class to graduate from the PMA after the restoration of Philippine democracy, and the first batch of new military officers to serve the administration of the late President Corazon Aquino.

The class – whose name means “light from above” – supported the EDSA People Power Revolution triggered by then military general Fidel Ramos and  defense minister Juan Ponce Enrile in February 1986.

Marching on Borromeo Field 30 years after their graduation, most of the Sinagtala Class are now high-ranking officials in the police and armed forces. They share the belief that the EDSA revolution taught them a valuable lesson.

“After the EDSA, we have learned our lessons. The military must be apolitical,” Brigadier General Archimedes Viaje, a member of the Sinagtala Class of 1986, told Rappler.

The apolitical characted of the military can be traced when retired Lieutenant General Antonio Sotelo, a colonel then, defied the order of the late dictator Ferdinand Marcos to disable the helicopter under the command of the military rebels led by Enrile and Ramos. (READ: #NeverAgain: Martial law stories young people need to hear)

“It (military) must not be involved with politics. We learned that as the protector of the people and the state, you have to stick to our calling,” Viaje added.

He cited the PMA’s core values to serve the country and God selflessly, and with honor and excellence.

Viaje, the dean of the Corps of Professors of the Armed Forces of the Philippines, said that the AFP is fully aware of their “role to be very careful… not to be involved in terms of political exercises.” 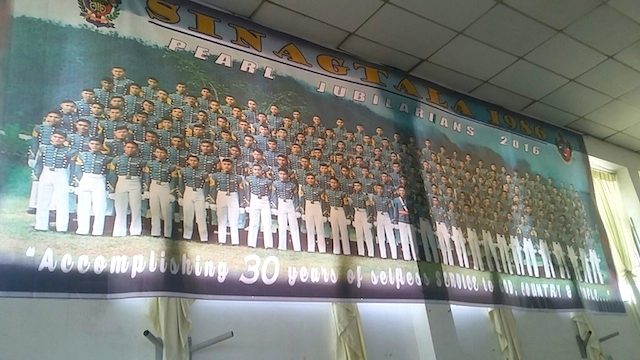 For the last 30 years, Viaje said that members of Class ’86 continued strengthening their bond as mistahs.

They numbered 174 on their graduation day, but have lost 21 classmates since then.

Twenty-six in the AFP and 15 in the Philippine National Police (PNP) have been promoted to star rank.

Some of the notable members of the class are Major General Jems Molina,  Deputy Chief of Staff of the AFP’s Plans and Programs; Brigadier General Rozanno Briguez, Commandant of Cadets in PMA; and Colonel Ronnie Evangelista, Commander of the Special Forces Regiment (Airborne). – Rappler.com