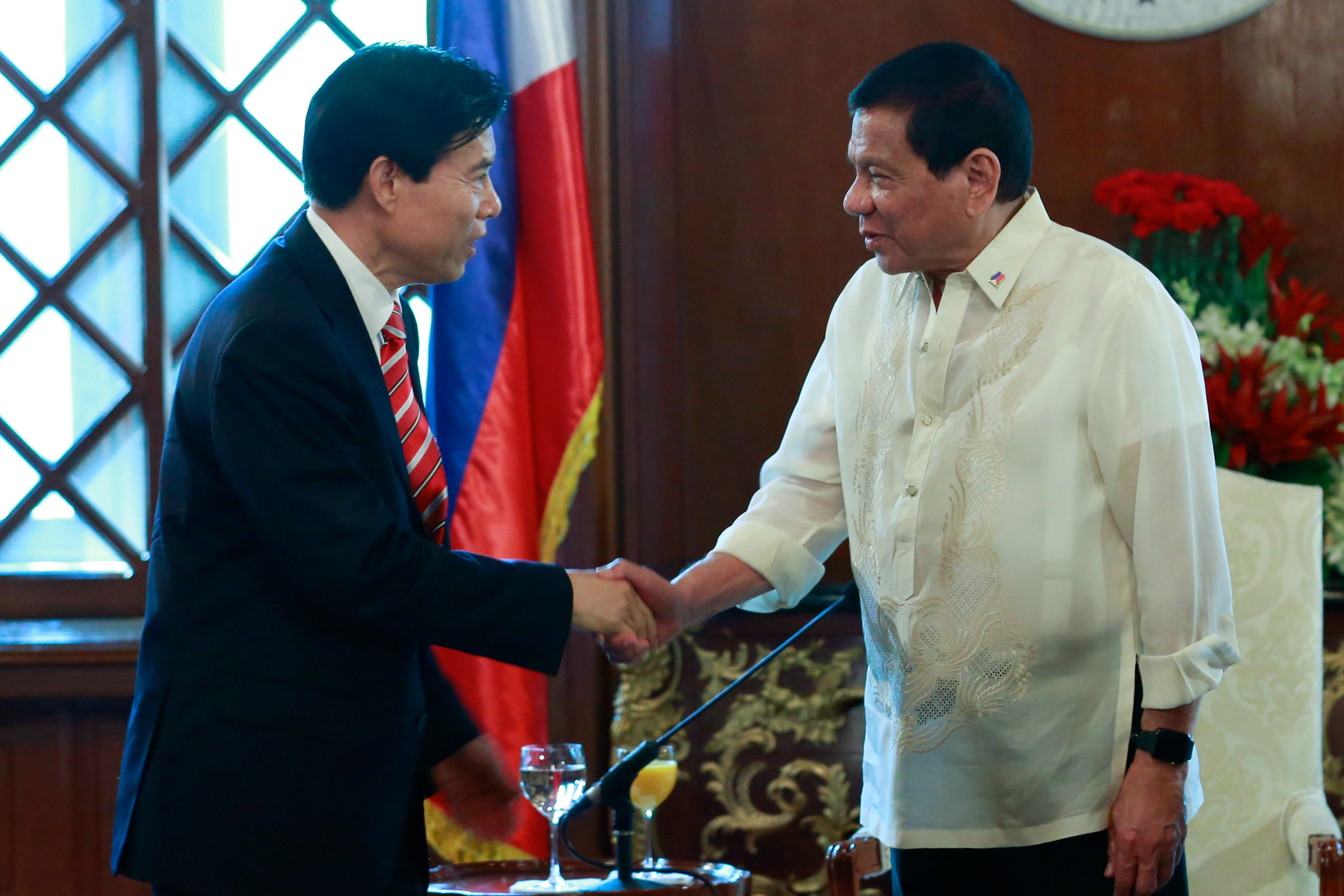 MANILA, Philippines (UPDATED) – After a meeting with China’s minister of commerce which yielded economic deals for the Philippines, President Rodrigo Duterte publicly expressed his appreciation for the Chinese government, particularly for his counterpart, President Xi Jinping.

“Let me publicly again thank President Xi Jinping and the Chinese people for loving us and giving us enough leeway to survive the rigors of economic life in this planet,” said Duterte on Wednesday, March 8.

He was speaking at a gathering of councilors in Pasay City.

Duterte’s expression of gratitude was prompted by news that the Philippines’ economic cooperation with China was doing well.

From his economic advisers, he had heard that pineapple, mango, and banana exports to China have doubled since China gave permits to Philippine fruit-exporting companies during Duterte’s state visit. (READ: What Duterte accomplished in China)

Chinese Commerce Minister Zhong Shan on Tuesday, March 7, announced assistance amounting to $100 million, the first out of $10 billion worth of assistance. Duterte did not elaborate what the aid is for or if it is in the form of a loan or grant.

The minister also supposedly handed over $100 million as aid for victims of the Surigao earthquake.

“Kaya ganoon na lang ang pasalamat ko (That’s why I am thanking them) and they have really lightened up the economic life of our country,” said Duterte.

The Chinese trade minister was originally scheduled to visit Manila on February 23 but cancelled the trip at the last minute. This was after Beijing slammed then Foreign Secretary Perfect Yasay Jr for saying that Association of Southeast Asian Nations foreign ministers expressed “grave concern” over China’s reported “militarization” of the disputed South China Sea.

Chinese Foreign Ministry spokesman Geng Shuang had slammed Yasay’s statement as “baffling and regrettable,” prompting Duterte to reassure China that his administration’s policy is to foster friendly ties with the regional giant.

Duterte said on Tuesday that the Chinese official likened the thawing of Philippines-China relations under the Duterte administration to the onset of “springtime” from a “cold winter,” apparently referring to the administration of Benigno Aquino III who took China to court over their sea dispute.

“Ang sabi niya (He said), ‘It was a cold winter. It is springtime for you to embrace with us.’ Kita mo? Noon kasi parang alangan (You see? It was awkward before),” the Philippine leader said, and recalled what befell the banana industry when the previous administration took a hardline stance against China on the South China Sea dispute.

The President lauded the Chinese for their willingness to “take care of” the North-South Commuter Railway Project.

“They will take care of this railway from north to south and we will begin immediately. You can really see the sincerity of the Chinese,” he said.

The government has already inked a deal for a $2.37-billion loan from Japan for the North Line of the North-South Commuter Railway.

The South Line, to cost between P250 billion and P260 billion, will be funded by official development assistance from either Japan or China.

The President gave himself a verbal pat on the back, saying he made the right decision in offering his hand of friendship to China.

“[On] the economic front, I think I made a correct decision. You know, I went up along in foreign policy and I went to China and talked to President Xi Jinping and I said, ‘I come here in peace. I am not here to demand or impose some conditionalities,'” said Duterte.

He acknowledged that his decision to be friendlier to China may have not sat well with others.

“Kaya ako sabi ko (So I said), at the expense of being hated sa ibang lugar, eh okay lang ‘yan (in other places, that’s okay),” he said.

For him, his gamble with China has paid off. Exultant about the doubling of agricultural exports to China, he said he expects the Asian giant to buy even more products from the Philippines.

“They said, ‘We will buy avocado. What else do you want us to buy because we need it with 5 billion people? There’s a lot of people who would like to eat, that’s not enough,'” said Duterte.

His own economic advisers told him: “[The Chinese] are willing to buy anything that we can sell.”

The Duterte administration has declared an “independent foreign policy” that would be separate from the United States and open to alliances with other countries.

For the sake of better economic ties with China, Duterte also decided to leave out any discussions of the international arbitral award that nullified China’s claim over vast swathes of the West Philippine Sea (South China Sea).

Superpowers like the US and Japan have been banking on the Philippines to use the award to challenge China’s claim, in a bid to counter China’s influence over the region. – Rappler.com