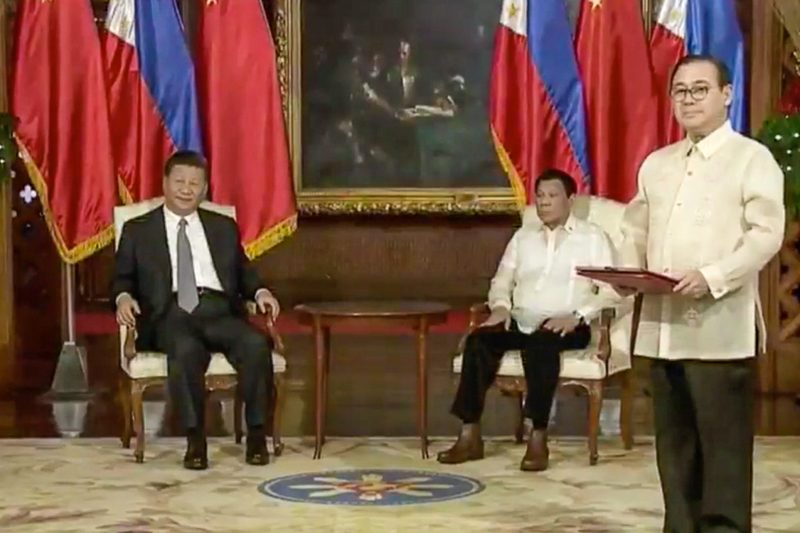 MANILA, Philippines – Malacañang has released a copy of the memorandum of understanding entered into by the Philippines and China to facilitate their cooperation on developing oil and gas resources in the West Philippine Sea.

The document was shared to reporters on Monday, November 26, less than a week after it was signed last Tuesday, November 20, by Philippine Foreign Secretary Teodoro Locsin Jr and Chinese Foreign Minister Wang Yi.

The deal was among 29 agreements exchanged in front of President Rodrigo Duterte and Chinese President Xi Jinping.

Presidential Spokesperson Salvador Panelo described the MOU as a “framework” that is “not legally binding.”

Here’s what you need to know about the MOU:

What it does: It represents an agreement between the Philippines and China to come up with agreements on oil and gas exploration and exploitation (referred to as “cooperation agreements”) within 12 months of the MOU’s signing.

What areas will be covered by the joint oil, gas development? The document does not state specific areas where the planned exploration and exploitation will take place, referring only to “relevant maritime areas.” But Energy Secretary Alfonso Cusi said on November 20 that it could cover parts of the West Philippine Sea.

Committee, working group formed. To come up with the cooperation agreements, the MOU formed two groups: an Inter-Governmental Committee and Inter-Enterpreneurial Working Group. The committee is composed of government officials as it is to be led by the foreign department or ministry of both countries and co-chaired by the energy department or ministry of both countries.

The working group meanwhile is composed of representatives from the companies chosen by the Philippine and Chinese governments to undertake the oil and gas exploration.

How does this impact the West Philippine Sea dispute? The West Philippine Sea belongs to the Philippines’ exclusive economic zone yet China insists they own the area using a 9-dash line that an international court said is illegal. The MOU tries to steer clear of this conflict in positions by declaring that all discussions and negotations made by the two countries pursuant to the deal “will be without prejudice to the respective legal positions of both governments.”

It also states that the MOU “does not create rights or obligations under international or domestic law.”