Peter Joemel Advincula, man who claims to be Bikoy, surrenders 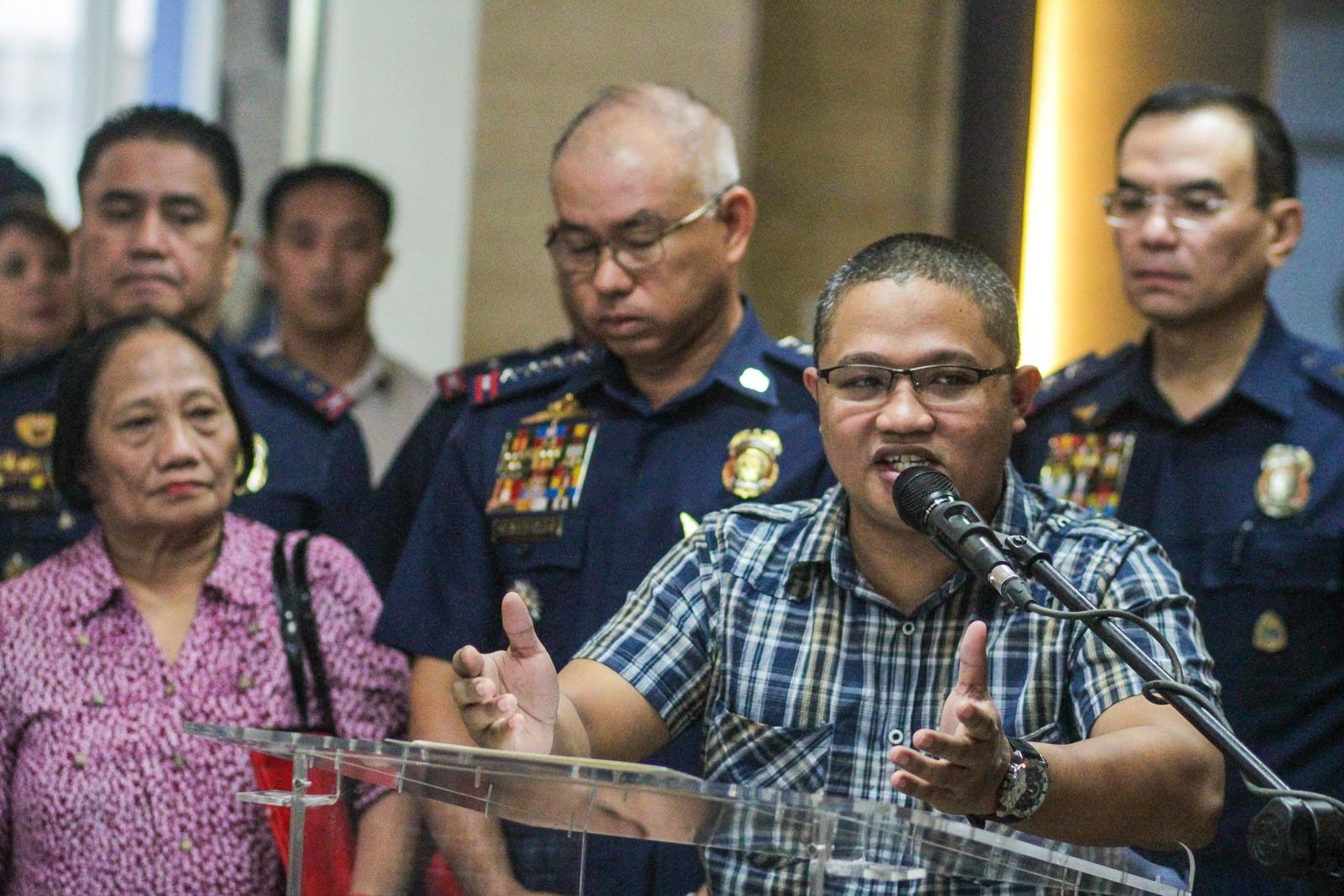 MANILA, Philippines (3rd UPDATE) – Peter Joemel Advincula, the man who claimed to be Bikoy, has surrendered to police.

Philippine National Police chief General Oscar  Albayalde said in a news briefing in Camp Crame on Thursday, May 23, that Advincula surrendered to the Northern Police District on Wednesday, May 22.

“Perhaps he felt the pressure of the manhunt operations against him,” Albayalde said in the news briefing where police presented Advincula. He added that Advincula would be released once he posts bail.

Advincula, who was allowed to issue a statement and take questions from reporters, claimed that he just played a role in a “script” supposedly prepared by the Liberal Party as part of its alleged bid to oust President Rodrigo Duterte and install Vice President Leni Robredo as the new president.

He claimed that the immediate objective of the viral videos was to boost the chances of the Otso Diretso candidates and pull down the Senate bid of presidential aide Bong Go. (READ: ‘Lahat ‘yan gawa-gawa’: Bikoy recants claims vs Duterte, Aquino administrations)

The LP denied the allegation.

Advincula said he was prompted to come out of hiding after none of the Otso Diretso candidates won in the 2019 elections.

“Nararamdaman ko na ilaglag na ako ng grupo (I felt that I was going to be abandoned by the group),” said Advincula.

Advincula said while he was in hiding, his younger brother Joseph contacted their cousin in the PNP Criminal Investigation and Detection Group (CIDG) who helped facilitate his surrender.

Joseph, who was also at the Camp Crame briefing, said that he reached out to his cousin as they feared for their lives – they saw unidentified men lurking outside their house. He said he wanted police protection for his family.

In the viral video “Ang Totoong Narcolist”  a man who claimed to be “Bikoy” accused family members of President Rodrigo Duterte of involvement in illegal drugs. That man later surfaced and sought help from the Integrated Bar of the Philippines in Pasig on May 6. (TIMELINE: The ‘Bikoy’ controversy)

Advincula had asked the IBP to help him sue presidential son Paolo Duterte and former presidential aide Bong Go, but the IBP declined the request.  Advincula fled after appearing in the IBP office and had been in hiding until his surrender to authorities on Wednesday.

In his press conference at the IBP, Advincula had claimed he worked for a drug syndicate under its operations center, overseeing a radio base and CCTV operations inside underground facilities in Misibis Bay in Albay. He then recalled being transferred to their “transmitting and facilitating team.”

On Thursday, Advincula claimed that everything he said in the Bikoy videos and his previous statements were “false.”  He tagged opposition Senator Antonio Trillanes IV as the main person behind the “script.”

“Hindi ako nagsasalita dito para paniwalaan ulit (I’m not speaking her to be believed, again),” Advincula said, when asked whether the public should believe his fresh claims.

Asked why he even granted interviews to the media, including Rappler, where he stood by the “lies,” Advincula apologized and said he was just following a “script” at the time.

He said he surrendered to “clean my name, and start a new life.”

Responding to questions, Albayalde said Advincula should be given a chance. – Rappler.com