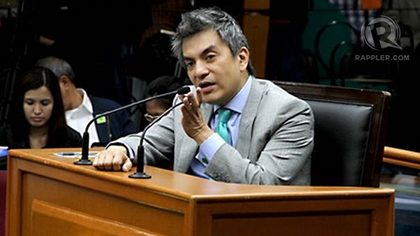 Tiangco testified for Chief Justice Renato Corona on Day 27 of the impeachment trial. A voluntary witness, Tiangco was the first to be presented by the defense.

The lawmaker said he only got a text message from Speaker Feliciano Belmonte Jr.’s office on Dec. 11, 2011, the night before Corona was impeached. The SMS was about a majority caucus and did not mention the agenda.

Tiangco said that in the caucus, copies of the impeachment complaint were not yet available, and the lawmakers were just made to watch a Powerpoint presentation of Tupas.

Holding a copy of the impeachment complaint, Tiangco told the Senate, “Ang pinakita ho, Powerpoint tapos narrative, hindi [ganito na] makapal.” (What was presented was a Powerpoint with a narrative, not a thick document like this.)

According to Tiangco, Belmonte said in the caucus that Corona will be impeached that day for being a protégé of former President Gloria Macapagal-Arroyo, and a stumbling block to the policies of President Benigno Aquino III.

Tiangco quoted Belmonte as saying, “This is non-debatable. No questions will be entertained.”

He told the court, “’Yung no questions will be entertained’ is a veiled threat.”

Tiangco did not sign the impeachment complaint and left the majority coalition in the House for supposedly railroading Corona’s impeachment.

The congressman was able to testify despite a Senate ruling disallowing the defense from further questioning the validity of the impeachment complaint.

Senators Francis Pangilinan and Jinggoy Estrada also questioned the relevance of Tiangco’s testimony. They said they did not see the connection of his statement to the Articles of Impeachment.

Defense counsel Dennis Manalo, however, explained that Tiangco’s testimony is necessary to question the integrity of the complainants and the complaint. Despite objections from the prosecution, Enrile allowed the lawmaker to take the witness stand.

“The court is intelligent enough to evaluate all these things,” said Enrile.

In his testimony, Tiangco said he felt nervous upon receiving the SMS because of his “bad experience” in the impeachment case of then Ombudsman Merceditas Gutierrez. She was impeached in March 2011 but quit before the Senate could try her.

Tiangco said the release of his Priority Development Assistance Fund (PDAF) or pork barrel that year was delayed because he did not vote to impeach Gutierrez. Like in Corona’s case, the Aquino administration pushed for the impeachment of Gutierrez.

The lawmaker said that during Gutierrez’s impeachment, text messages allegedly from Cavite Rep Joseph Emilio Abaya, chairman of the House Committee on Appropriations, said that those who will vote against the impeachment will not receive any pork barrel from the administration. Abaya denied sending the SMS at that time.

Tiangco said he repeatedly wrote Budget and Management Secretary Florencio Abad to ask about the release of his pork barrel but initially got no response.

“Wala pa ring nirerelease na SARO (special allotment release order) sa akin samantalang sa iba, na-release na halos lahat,” said Tiangco. (No SARO was released to me while almost all of the others got everything.)

Tiangco claimed Abad eventually texted him the following message: “On my own, I cannot withhold legislators’ PDAF. I suggest you talk to PNoy. Speaker Belmonte can help you.”

Tiangco admitted though that he eventually got his pork in August 2011, much later than May when the other solons supposedly received theirs.

In an interview after the trial, Tupas said Tiangco’s testimony was a waste of time as he raised no new issue. He said the congressman was just sour-graping over his pork barrel.

“It has no relation, it has nothing to do [with the case]. It will not prove Articles 2, 3 and 7. It’s not even related to the articles we dropped.”

In a text message, Abad also denied Tiangco’s allegations. The budget chief said his testimony is only a ploy of the defense to delay the impeachment trial.

“Check the House records: many who voted [against the] Merci [Gutierrez] impeachment got their PDAF. So there is no such policy by the administration. So his testimony is irrelevant to the impeachment trial as it doesn’t establish a policy.”

For the defense, Tiangco’s testimony was successful as it exposed irregularities in the filing of the impeachment complaint.

Defense counsel Jose “Judd” Roy III said Tiangco was able to establish that the impeachment complaint was unsubstantiated, and to raise doubts in the minds of senators.

“If it should come to a point where the benefit of doubt must stand, the evidence presented by Cong. Tiangco will weigh in favor of the doubt to the benefit of the Chief Justice.”

Roy has been cited in indirect contempt of court for accusing the Palace of attempting to bribe senators. He said Tiangco’s testimony shows Malacañang’s hand in Corona’s impeachment.

“It was very important to show that there was a pattern of intimidation, a pattern of undue influence so even where the allegation had no substance or no substantiation, individuals signed.” – Rappler.com