MANILA, Philippines – For the first time, both chambers of Congress on Monday, May 4, formally adopted “hybrid” sessions where some lawmakers are in the session hall while others are present via online means.

The chambers, however, took different routes in adopting teleconferencing as part of their proceedings.

In Pasay City, the Senate first passed Senate Resolution No. 372, a resolution on teleconferencing during national emergencies. Senators who joined the plenary session online were acknowledged only after the resolution was passed.

At Batasan, the House, through separate motions, formally adopted new policies allowing members to participate in all proceedings through electronic means such as email, teleconferencing, and messaging apps.

Unlike the Senate, however, the lower chamber found no need to adopt a resolution to formalize their teleconferencing procedures.

Senate President Vicente Sotto III earlier said that the upper chamber would have to pass a resolution to amend the Senate rules, to prevent anyone from questioning their proceedings. On Monday, the chamber implemented strict health protocols such as physical distancing, wearing of face masks, and coronavirus rapid testing for all senators and Senate staff.

Panels were also installed at the Senate lobby to separate the security personnel from those entering the building. Members of the media were barred from attending the session to limit the number of people at the Senate.

EARLIER: This is how the Senate lobby looks like, as session resumes today at 3 pm. Video courtesy of Leo Palo/OS Bong Go @rapplerdotcom pic.twitter.com/vgfFFjys9x

At least 18 employees, 5 of whom are senators’ staff, tested positive for COVID-19 during the rapid testing. Sotto said they were sent to a hospital for swab testing, and would be under quarantine. 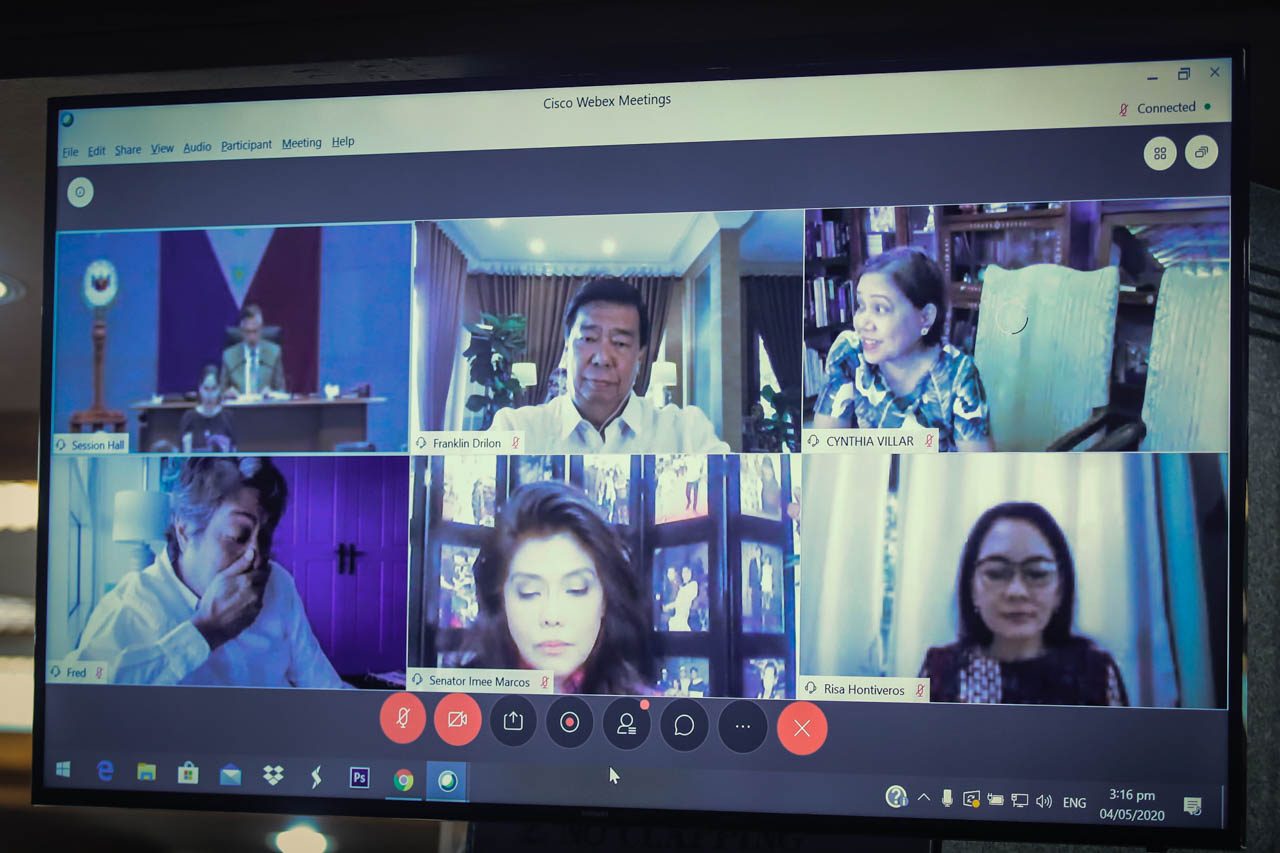 Fifteen senators were present at the session, while 8 senators joined via teleconferencing after the resolution was passed. Those who were present online include:

Senators are allowed to vote in absentia under the approved teleconferencing resolution. Privilege speeches, however, must still be delivered at the session hall. Sotto said he will go to the Senate to preside sessions.

The proposed Alternative Learning System Act was the first bill to be approved on final reading under the hybrid setup. The chamber also adopted Senator Bong Go’s resolution on the proposed “Balik Probinsya” program.

Monday’s session was the first time in Senate history that it conducted a hybrid meeting. The chamber didn’t follow the House’s hybrid session during the March 23 special session.

In 2019, Drilon and Senator Panfilo Lacson sought to allow detained Senator Leila de Lima to join plenary sessions from Camp Crame. This resolution, however, remained pending, as the Senate leadership argued that De Lima is “not under the chamber’s jurisdiction.”

At the lower chamber, it was House Majority Leader Martin Romualdez who made separate motions seeking to authorize legislators to attend, participate, and vote on measures, and to conduct committee hearings through online means.

He also moved to allow only 25 House members to physically attend the 3 pm plenary sessions at the Batasang Pambansa.

All of Romualdez’s motions were adopted when no lawmaker made an objection. Only 25 legislators were allowed to physically attend Monday’s session:

Strict physical distancing measures are currently in place in the House to help quell the spread of COVID-19. Only 25 House members are allowed to be physically present during the session, while another 25 guests – including congressional staff and the media – can watch the proceedings.

In an advisory sent to reporters on Monday, the lower chamber said only television crews will be allowed to cover House proceedings until May 15. The rest of the media were asked to monitor the House’s stream online.

Speaking before his colleagues at the start of the session, Speaker Alan Peter Cayetano said the COVID-19 crisis calls upon legislators to “adopt” and “innovate” to do their work.

“In this extraordinary times, people look to Congress not just so that they can be represented but that we provide answers and or provide solutions. We are called upon to adopt, innovate, and manage. We have to take aim towards very specific targets and that’s what we have been doing,” Cayetano said.

“We will not fail our people. And with the help of technology, every single district and every single sector that has a party-list representation shall be represented and shall have a voice and vote during this May session that we will have,” the Taguig City-Pateros congressman added.

The newly formed House Defeat COVID-19 committee has also been conducting virtual technical working group meetings through Zoom in the past weeks. – Rappler.com