MANILA, Philippines – Leonardo Coll worked overseas as an engineer in the oil field industry for 7 years.

On June 7, 2001, he made his first property investment in Metro Manila: a condominium unit he paid in full for P1.042 million.

What he didn’t know at the time was that the developer he entered a contract with used the condominium building as part of a collateral for a P600-million loan it obtained from the state firm Government Service Insurance System (GSIS).

The St John Condominium, a property developed by the New San Jose Builders Inc (NSJ), attracted many unit buyers with its accessible location and NSJ’s sales pitch of a 0% interest rate in the monthly payments.

When NSJ failed to pay its loan to GSIS, St John Condominium (SJC) underwent foreclosure proceedings. The building was auctioned and sold to the highest bidder, the GSIS, without the knowledge of the unit buyers who were then either paying a monthly amortization of about P30,000 or had already issued full payments for their units.

By the time Coll followed up his Condominium Certificate of Title (CCT) as proof of his ownership, the NSJ handed him only a Certificate of Full Payment.

“Pinaghirapan ko yun. Nagtrabaho ako sa ibang bansa eh (I worked hard for it. I worked overseas)… I paid to the developer and they promised to deliver what I paid for. I don’t know what type of business practice they’re running, but if you’re a developer of real estate and your client pays you, I don’t see why you should not deliver on your promise,” Coll told Rappler.

Documents obtained by Rappler showed NSJ admitting to the existence of the P600-million loan, but it said it is “a common and regular real estate transaction.”

In its agreement with GSIS, New San Jose retained its right to sell the 102 SJC condominium units to third-party buyers, provided the profit from the sales was used to recoup the loan.

“The pool of collaterals include St John Condo units which were yet unsold at the time that the loan was made,” a former NSJ executive said in an e-mail to one of the buyers. 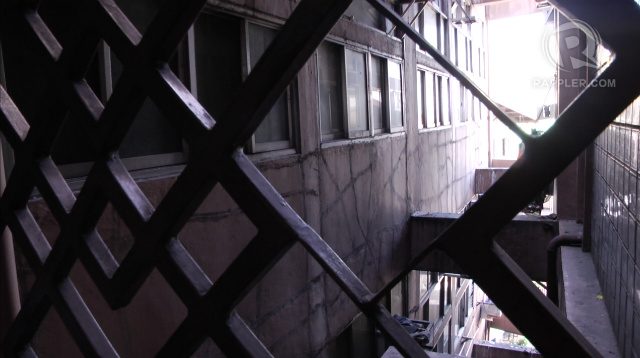 But for lawyer Carlos Abesamis, a board member of the SJC Unit Owner’s Association, the timeline of events makes the NSJ’s sale of SJC units all the more questionable.

The loan agreement – which was entered into by GSIS and NSJ a full two years before buyers signed a contract with NSJ – should have been disclosed to buyers and potential buyers.

Abesamis added that while the loan transaction may have been legal, it was made at the expense of people who were simply trying to find a place they could call home.

“Most of us are employees in the private sector, some in government. We are not executives. Perhaps some of us are middle-level executives, but then we are still struggling to own property,” he said.

When NSJ defaulted on its payment of the P600-million loan, the development of amenities promised to the unit buyers was abandoned.

A quick survey of the building shows a dumping area where a swimming pool should have been. The repainting of the building, the maintenance of facilities, and the emergency expenses when facilities break down have been shouldered by the association since then.

Even the salaries of the building manager, utility men, and the security guards are now subsidized by occupants of the units.

Titus Lontoc, whose father purchased an SJC unit in 1999, now finds he is the heir of a property that has caused more trouble than benefits.

Lontoc’s father Lodovico decided to buy an SJC unit where his children could stay when in Manila. Lontoc said it was an attractive sales pitch at the time – 5 years to pay at 0% interest rate. While Lontoc has not issued a full payment for his unit, he has paid for the improvements of the bare unit that NSJ sold. For more than two years, Lontoc also paid for the monthly amortization of the unit.

For his part, fully-paid unit owner Coll said the property investment has been a waste.

“Everybody needs money. And if you have property and you can’t utilize it, then that’s a waste… We feel angry, aggravated by the situation,” he said.

Willing to pay, wanting to stay

When partially paid unit buyers learned of SJC’s foreclosure, they appealed to the Housing and Land Use Regulatory Board (HLURB) to determine who they should pay to.

Willing to pay the rest of their amortization fees, the unit buyers asked the HLURB if payments should be given to developer NSJ or de jure property owner GSIS.

HLURB ordered the payments to be given to the state firm, but GSIS refused to accept the payments. It has since then elevated the case to the Office of the President and then to the Quezon City Regional Trial Court (RTC), until the Court of Appeals (CA) in 2011 finally ruled in its favor.

“We felt that no matter that we want to comply with our contractual obligation to make full payment by making religious monthly amortization payments, all our efforts will be put to waste,” Abesamis said.

“Most of us here have made their lifetime savings investing on this property. Most of us here have nowhere to go, because they do not have any other residential units where they can transfer easily,” said Abesamis, who is also the legal counsel for the unit buyers.

“They find they’ve come to love this place. They want to enjoy the fruits of their labor,” he added.

While the Temporary Restraining Order issued by the High Court allows the unit buyers to occupy SJC units in the meantime, the threat of being kicked out from the place they have called home continues to loom over them.

Rappler had requested for an interview with GSIS and New San Jose Builders but has not received any reply as of posting. – Rappler.com