Jun 20, 2012 11:55 AM PHT
KD Suarez
Facebook Twitter Copy URL
Copied
'The Philippines is a source country and, to a much lesser extent, a destination and transit country for men, women, and children subjected to sex trafficking and forced labor' MANILA, Philippines (UPDATED) – Despite making significant efforts in fighting human trafficking, the Philippines has yet to fully comply with the minimum standards to eliminate it.

This was the overall assessment for the country in the 2012 edition of the Trafficking in Persons (TIP) report, released by the US State Department on Tuesday, June 19 (Wednesday, June 20 in Manila).

Because of this, the country remains in Tier 2 of the 3-tier system, indicating compliance of countries with international standards and agreements in the fight against modern-day slavery.

Tier 2 countries are officially defined as “countries whose governments do not fully comply with the TVPA’s (Trafficking Victims Protection Act) minimum standards, but are making significant efforts to bring themselves into compliance with those standards.”

The State Department’s annual report said however that progress was being made on cracking down “on the scourge of trafficking in persons” with more governments bringing in prosecutions while setting up systems to help victims.

The Trafficking in Persons report said human trafficking remains a significant domestic problem in the Philippines, as people are being trafficked to urban areas from the provinces for forced labor and exploitation in the commercial sex industry.

“The Philippines is a source country and, to a much lesser extent, a destination and transit country for men, women, and children subjected to sex trafficking and forced labor,” the report said.

Filipino migrant workers within and outside the country, the report also noted, are victims of “violence, threats, inhumane living conditions, nonpayment of salaries, and withholding of travel and identity documents.”

It also cited the various methods of how people are lured by syndicates and corrupt officials into forced labor.

The TIP report also cited the vulnerability of Filipino children, highlighting the continued problem of child sex tourism, child combatants in armed conflict, as well as the vulnerability of youth in conflict areas. They become easy prey because they do not have birth registrations or other official documents.

Despite these, the report cited the Philippines’ efforts in curbing this major problem.

For instance, the country’s budget for the Inter-Agency Council Against Trafficking (IACAT) was raised to an equivalent of $1.5 million last year, up from $230,000 the year before.

The report also said the Philippines continues to prosecute and convict trafficking offenders, as well as initiate new programs to help their victims.

“The government made notable efforts to prevent trafficking, including through training public officials, strengthening and expanding structures to screen for trafficking indicators before Filipino migrant workers’ departure overseas, and negotiating bilateral agreements to protect its workers employed in foreign countries,” the report said.

However, one gray spot for the government’s efforts is the failure to make progress on efforts to prosecute illegal recruiters, as well as issues in victim identification and protection.

Corruption in government is also a hindrance in the efforts against human trafficking, the report added.

To further move the country’s fight against modern-day slavery forward, the TIP recommended that the country boost its efforts in anti-trafficking programs.

Among the recommendations are the continued and intensified efforts to try trafficking cases here and abroad; increase funding and training for government agencies dealing with the problem; address the backlog of cases; and respond to new cases immediately and rigorously.

The report also recommended increasing the number of support services for victims nationwide; increasing funding for the protection of victims and witnesses; further improving the tracking and monitoring of Filipino trafficking victims abroad and pursuing criminal investigation and prosecution of traffickers; as well as implementing programs to reduce the demand for commercial sex acts.

Countries are placed under 4 categories: Tier 1, Tier 2, Tier 2 Watchlist, and Tier 3. Tier 1 countries fully comply with the TVPA minimum standards; Tier 2 do not fully comply, but are making significant efforts.

Tier 2 Watchlist countries, meanwhile, are the same as those under Tier 2, but have a significant number of victims, and there are failures to prove increasing efforts against slavery from previous years.Those under Tier 3 face sanctions such as the withdrawal of non-trade and non-humanitarian-related assistance.

The government welcomed the TIP report’s assessment of the country’s efforts against human trafficking.

“Under President Benigno Aquino III’s leadership and in a span of two years, we have exceeded what the previous administration had accomplished in five years,” Vice President Jejomar Binay, chairman emeritus of the IACAT, said in a statement.

“We were able to achieve 39 trafficking-related convictions in a span of 22 months compared to the 29 convictions the previous administration had from 2005 to June 2010,” he said.

“We hope to sustain this consistency and improve upon our efforts to curb trafficking in persons in the country. We have taken note of the recommendations of the US State Department and will act on these at the soonest possible time,” Binay added. 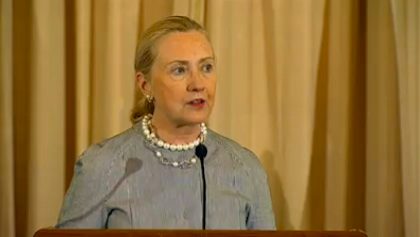 Overall, up to 27 million people are living in slavery around the world, US Secretary of State Hillary Clinton said at the unveiling of the report at the State Department in Washington, DC.

“The end of legal slavery in the United States and in other countries around the world has not, unfortunately, meant the end of slavery,” said Clinton.

“Today it is estimated as many as 27 million people around the world are victims of modern slavery, what we sometimes call trafficking in persons,” she said.

“Whatever their background, they are the living, breathing reminders that the work to eradicate slavery remains unfinished.”

Out of the 185 countries included in the 2012 report, only 33 complied fully with laws in place to end human trafficking, such as the Universal Declaration on Human Rights which prohibits slavery and involuntary servitude.

But she hailed the fact that in the 2012 Trafficking in Persons report a total of 29 countries had been upgraded from a lower ranking, “which means that their governments are taking the right steps.”

Clinton pointed to such things as “enacting strong laws, stepping up their investigations and prosecutions, or simply laying out a road map of steps they will take to respond.”

The focus of this year’s report is on how to better protect the victims, even as it urges governments to meet the challenge head-on.

But it also argues that human trafficking takes many guises and is not just about moving people across borders to trap them in prostitution.

A modern-day slave can be a migrant worker lured abroad by the promise of a well-paying job as a nanny or a factory worker, whose freedom of movement is then curtailed perhaps by having their passport taken away.

It can be someone who stays in their own country but is kept in forced labor, and denied the right to leave.

The full Trafficking in Persons report can be accessed at the State Department’s website. – With a report from Agence France-Presse/Rappler.com