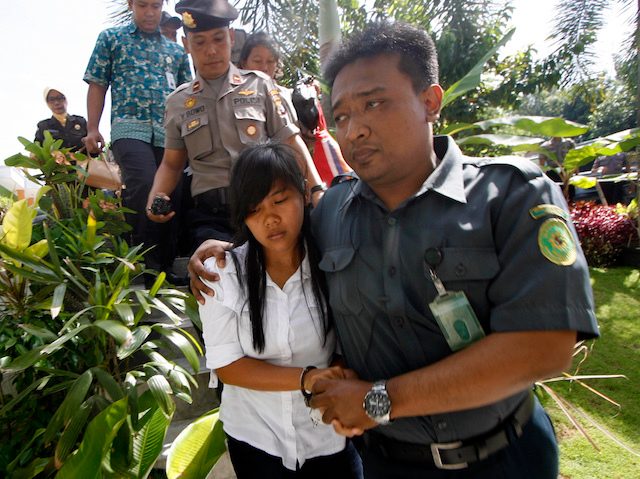 Facebook Twitter Copy URL
Copied
There are at least 125 OFWs on death row in countries where capital punishment is imposed including Indonesia, China, and Saudi Arabia

“This is yet another case of the Philippine government doing too little, too late. She was arrested in 2010 and was not assigned a lawyer until the last minute,” said Garry Martinez, Migrante International chairperson.

Migrante believes Veloso’s case was not thoroughly investigated and that she suffered a mistrial.

The 30-year-old mother of two was arrested, tried, and sentenced to death in 2010 for attempting to smuggle 2.6 kilograms of heroin into Indonesia. But Veloso’s family claims she is a victim of an international crime syndicate that uses innocent women to traffic drugs around Asia. (READ: A slow death for family of Filipina on Indonesia’s death row)

Veloso only began making headlines in Indonesia in January, after Indonesian President Joko “Jokowi” Widodo rejected her request for clemency. Shortly after, Indonesian authorities announced the next batch of executions which includes Veloso, the only Filipino on Indonesia’s death row. (READ: FAST FACTS: The case of Mary Jane Fiesta Veloso)

Indonesia is known for its tough stance in implementing capital punishment. It has been criticized for rejecting appeals of foreign governments to spare their citizens on death row, while making similar requests to other countries where Indonesians face the same fate. Even with the rejection of its appeal for a judicial review of Veloso’s case, the Philippine government had said that it would “exhaust” all remedies to save the Filipino worker.

In August 2011, President Benigno S. Aquino III submitted an appeal for clemency on behalf of Veloso to then President Susilo Bambang Yudhoyono. At the time, Indonesia had a moratorium on executions and the clemency request was not acted upon.

On February 9, 2015, Aquino raised Mary Jane’s case with Jokowi, who was on his first state visit to the Philippines. Later that same month, on February 19-21, the government also helped Veloso’s mother, sister, and two children visit her in jail in Yogyakarta.

But Migrante protested the government’s failure to save the lives of OFWs on death row, including Veloso.

On Tuesday morning, April 7, Migrante and Veloso’s family will picket in front of the Department of Foreign Affairs (DFA) officies in Manila.

“Like Veloso’s family, we are not losing hope. We call on all Filipinos around the world, on all OFWs and their families who have been neglected by this government, and advocates to join us in the call to save Mary Jane’s life,” Veloso said. (READ: 3 ways to help save #MaryJane from Indonesian death row)

According to Migrante, there are at least 125 more OFWs on death row in other countries where capital punishment is also imposed like China and Saudi Arabia. – Rappler.com