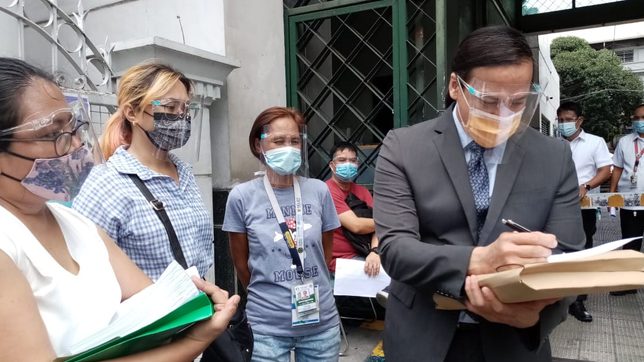 Facebook Twitter Copy URL
Copied
It's a tall challenge to the Gesmundo Court, but activists are desperate. They appeal for 'urgent, immediate, simple, concrete, and practical reliefs'

Prominent progressive leaders and families of slain activists have appealed to the Supreme Court to look at the bigger picture of human rights violations in the country for the last two decades, as they called for an end to the “dirty war against unarmed activists.”

The group made the appeal in a hand-delivered letter to the Supreme Court on Tuesday, May 18, where they outlined incidents and patterns of attacks against activists since the presidency of Gloria Macapagal Arroyo.

The group sent the letter while the High Court was supposed to be assessing reports on attacks on lawyers to consider institutional changes of its rules.

The Supreme Court did a monthlong information gathering on attacks on lawyers, but activists said in their letter that “it is equally important for the Honorable Court to look into the attacks suffered by the clients and to understand the overarching government policies that cause them.”

“From the administration of President Gloria Macapagal Arroyo to the present, the Philippine government, particularly the Executive Branch and its security forces from the Armed Forces of the Philippines and the Philippine National Police, have engaged in a ‘dirty war’ against unarmed activists,” they said in their letter, which Court Administrator Midas Marquez received in person.

“We earnestly ask that these incidents of attacks and concerns be seriously taken into account in the process of formulating and issuing any preventive and remedial steps to address the worsening state of human rights in the country,” they also said in their letter.

As killings escalated over the last few months, the Supreme Court has been at the center of pressure and pleas for meaningful changes as an independent branch of government.

Data from Karapatan shows that from July 2016 to March 2021, or under President Rodrigo Duterte, 394 human rights defenders were killed while 493 others were attacked. A total of 1,090 were arrested and jailed, 2,700 arrested without being jailed, and 1,205 searched.

Before then-chief justice Diosdado Peralta retired, he said that the Supreme Court had been “careful” to use its rule-making power.

The tall challenge is now left with Chief Justice Alexander Gesmundo. Desperate activists have appealed to him for “urgent, immediate, simple, concrete, and practical reliefs.” 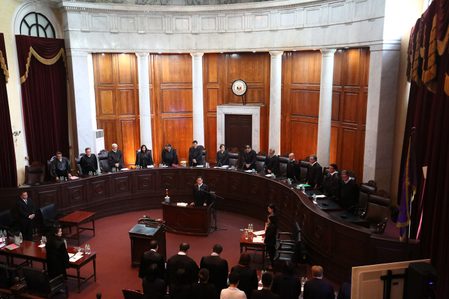 In the letter, activists cited the 2007 ruling Ladlad vs Velasco where the Supreme Court stopped the criminal prosecution of progressive leaders for rebellion. In that case, the Court said “prosecutors should not allow, and should avoid, giving the impression that their noble office is being used or prostituted, wittingly or unwittingly, for political ends.”

It was also in 2007 that the Supreme Court, led by Reynato Puno, created the extraordinary writs of amparo and habeas data to protect activists.

“Despite the Ladlad ruling and the issuances of the protective writs in favor of activists under threat, the practice of branding organizations and institutions as communist fronts, also called red-tagging, continued, wherein state forces incite physical harm and violence on leaders and members of these organizations,” the activists said in theire letter.

Activists urged the Court to abandon the Marcos-time doctrine, Ilagan vs Enrile, which courts have used to dismiss petitions for writ of habeas corpus.

A habeas corpus petition is resorted to when activists claim illegal arrest and detention. But because of Ilagan vs Enrile, once state agents manage to file the proper case and prosecutors approve charges, courts no longer see these arrests as illegal since there is already ground for detention.

Activists and human rights lawyers have decried this as a misapplication of the law, saying that notwithstanding the approval of charges, courts must still examine whether the arrest and initial detention were illegal.

Activists told the High Court that the government still continues its practice of filing charges against them in faraway courts, with some undergoing preliminary investigation without their knowledge. Renalyn Tejero of Cagayan de Oro did not know there were complaints against her until she was arrested.

Activists requested the Court for an “establishment of a central repository of criminal charges by which the people can be informed of cases filed against them.”

It’s been the position of activists that because extraordinary writs are neither criminal nor civil, courts can be more liberal in issuing them, as well as injunctions, to stop red-taggers. It shouldn’t be too difficult to ask a red-tagger to stop what they’re doing, they said.

A local judge in Baguio recently did this for young activists.

Aside from longtime calls for a review on rules on search warrants –  which they claimed had been weaponized against them – the activists want “uniform rules” that would allow them to secure copies of police records and applications for warrants so that when they are arrested, they can fight the charges head-on. Activists have complained that some judges do not help them get police records, making it difficult for their lawyers to build their defense.

“Copies of records on the application for a search warrant should be made readily available to the accused from the point of arrest,” said the activists. – Rappler.com