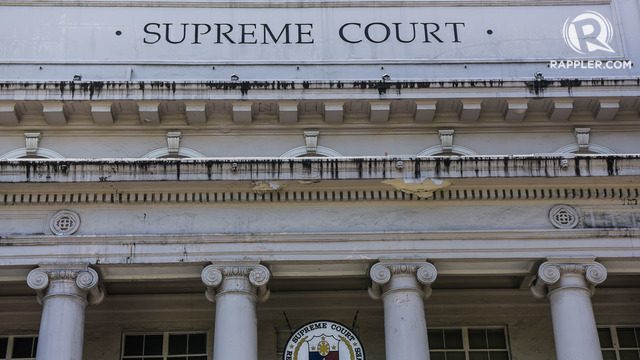 Facebook Twitter Copy URL
Copied
Oral arguments on the anti-terror law are set to begin on February 2. The Supreme Court says no more postponements are allowed.

(UPDATED) The oral arguments on the controversial anti-terror law have been rescheduled to February 2, after staffers of Solicitor General Jose Calida got infected with the novel coronavirus (COVID-19), the Supreme Court announced on Friday, January 15.

The oral arguments were originally scheduled on January 19.

The oral arguments for the anti-terror law are widely anticipated as the law has been flagged as unconstitutional by many legal scholars and lawyers, including former Supreme Court senior associate justice Antonio Carpio.

Thousands of activists are also worried about the repercussions of applying the law against them and the government’s critics after experiencing a long history of red-tagging and terror-tagging. These practices have only intensified under the strongman leadership of President Rodrigo Duterte.

A total of 37 petitions seeking to stop the law are set for discussion in the High Court.

The reset marks a major postponement in the Supreme Court caused by the coronavirus, which has already slowed down courts nationwide.

According to the Clerk of Court, “no further postponement will be allowed.”

In a statement, National Union of Peoples’ Lawyers (NUPL) president Edre Olalia, one of the petitioners, said they were “quite disappointed” with the last-minute postponement.

“We pray, though, that no supervening event would transpire meanwhile that might put things in jeopardy, especially now that the law seems poised to be applied at neckbreaking speed. We wish our colleagues in the profession well,” Olalia said in a statement on Friday.

Calida’s report about his staffers catching the virus came after he sought to cancel the oral arguments altogether, arguing that they would violate health protocols even if the hearings were held online. The Supreme Court denied his request. – Rappler.com