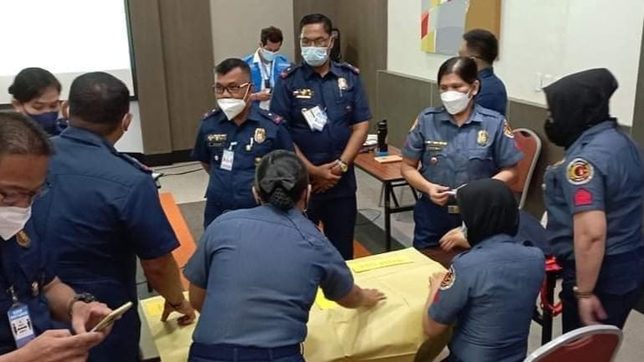 HUDDLE. Police officials in Maguindanao help map out measures to strengthen policies on gender-based violence, and violence against women.

Facebook Twitter Copy URL
Copied
Bangsamoro Women Commission head Bainon Karon says Islamic sermons could be used to lower cases of rape, the trafficking of women and girls, and wife desertion and abandonment in the region

GENERAL SANTOS CITY, Philippines – Bangsamoro Autonomous Region in Muslim Mindanao (BARMM) officials on Monday, December 13, said they would tap Islamic scholars and preachers to strengthen the campaign to lower cases of gender-based violence, and violence against women and children in the region.

Bangsamoro Women Commission (BWC) chairperson Bainon Karon said the “khutbah” or Islamic sermons could be used to curb incidences of violence such as rapes, the trafficking of women and girls, and wife desertion and abandonment.

“The Ustadz (preachers) can use the khutbah to help us campaign against the evils of gender-based violence,” Karon said.

Maguindanao province accounted for 70 of the 71 cases of violence against women and children in the BARMM from January to October alone, police said.

Major Merle Glemao, head of the police’s women and children’s desk in Maguindanao, noted that 34 of the cases were violence against women, of which 27 were rape incidents perpetrated by those known or close to the victims.

Officials said there could be more that have not been recorded because the victims have opted to keep the abuses to themselves for different reasons.

A visiting official of the United Nations Population Fund (UNFPA) called it “a silent pandemic.”

“We need to stop this silent pandemic. Wherever violence against women and girls occurs, it is a violation of human rights,” said UNFPA country representative Dr. Leila Joudane over the weekend.

Joudane also called on the BARMM to engage people and groups in meaningful conversations about changing norms, beliefs, and practices that are harmful to women and girls.

BARMM Chief Minister Ahod Ebrahim agreed with Joudane. “We must foster an atmosphere where everyone responds with compassion and support those pursuing cases on violence against women and girls.”

Ebrahim said the BARMM would work harder so that women and children in distress would be able to find the help they deserve. –Rappler.com