Members of the cabinet of former President Fidel V. Ramos reenact the signature “Kaya Natin Ito” thumbs up sign of his administration. Masks were temporarily removed for the picture. 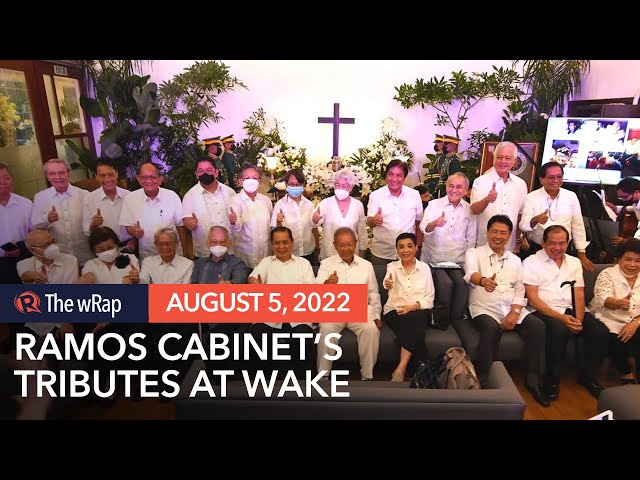 MANILA, Philippines – The first night of the wake of former president Fidel V. Ramos reunited the men and women who served his Cabinet in the 1990s, all with nothing but kind words for the boss who they said dedicated his life to genuine public service.

“Patriotism was not a slogan, but a lived experience,” Ramos’ finance chief Roberto de Ocampo said in his eulogy on Thursday night, August 4, at Heritage Park in Taguig City.

“He was not a politician, he had no bailiwicks, he did not come from dynasties, and was not interested in developing one,” he added. “[But] I can arguably say that he was probably more prepared for the presidency than many who tried their best to become president through a political process.”

For longtime friends who worked with him even before he became president, Ramos was a man who was calm, cool, and collected even in the most tense situations.

That meant being on top of things despite coup threats during the Corazon Aquino administration, which he served as military chief, and later, as defense secretary.

“While President Cory was the enduring symbol of [democracy’s] restoration, the role of then-general Ramos in ensuring preservation was often not talked about in great detail,” said former Senate president Franklin Drilon, who was justice secretary under both the Cory Aquino and Ramos administrations.

“As secretary of defense, I saw him defend Cory and democracy nine times, and he was steadfast. And indeed, I saw why he was called ‘Steady Eddie,'” he added. 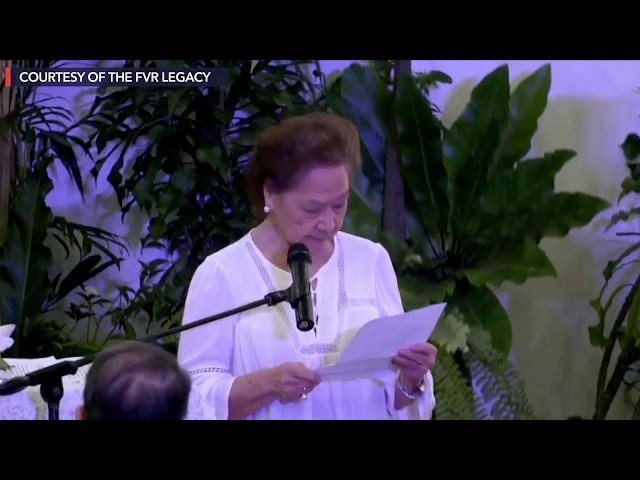 “He called for a closed-door conference of major service commanders and the chief of constabulary, and directed that they support his stand to defend democracy and the Cory government from a regime change,” shared De Villa, who also served as Aquino’s defense chief after Ramos resigned to run for president.

Former interior secretary Rafael Alunan III fondly recalled the grueling working hours in the Cabinet, as they found it difficult to keep up with Ramos’ pace.

“He was an advocate of ‘Kaya natin ito (We can do it),’ because we held the belief that we need an attitude of self-reliance,” De Leon said.

Ramos also loved writing instructions in the margins of memos and letters, as well as reading newspapers early in the morning, so that he would know the issues hounding his government.

De Villa shared: “He said [to me], ‘Did you know about this fund mess reported in the Bulletin that happened in Tanay?’ I said, ‘I’m sorry, Sir, I haven’t read it yet.” He said, ‘Goddamn, you better buy newspapers and read them. Make sure you answer it before noontime.’ I said, ‘Yes, Sir.’ That was the lesson. From that point on, he never caught me again sleeping with respect to news reports.”

Drilon said he longed for the Ramos way of getting things done.

“In the late part of my political career, when I joined meetings among bureaucrats, I missed the way President Ramos would conduct the meetings: with precision, with full knowledge, with full grasp of what was happening,” Drilon said.

“He wanted to know who I cared for, why he could not make me learn golf on Sunday. And that was the caring that we all just required to work 24/7,” she said.

“He was a skydiver who would jump out of his plane with his parachute, but at the same time, carrying a box of beer for his boys on the ground,” added De Villa, who said he and Ramos had been friends for 65 years.

All of their speeches had a common theme: They will miss a leader who led by example.

“We lost a son of the Republic, a peacemaker who earned his ticket home. Who he really was and what he accomplished will long be extolled by scholars and public records and forever honored at the Libingan ng mga Bayani,” Alunan said. – Rappler.com