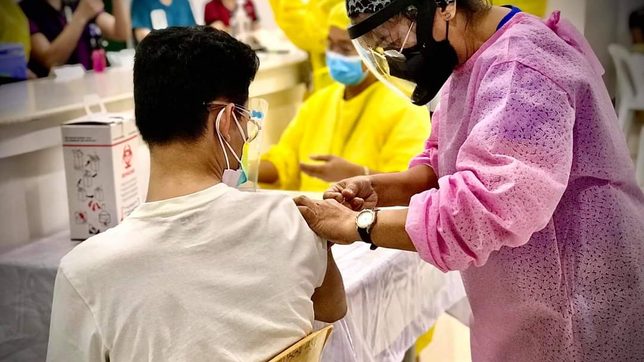 Facebook Twitter Copy URL
Copied
'Infants can also go inside the malls and shopping centers as long as they are accompanied by their parents or adults,' says the Cagayan de Oro COVID-19 governance cluster head Oliver Egypto

The Cagayan de Oro City government on Thursday, November 11, prohibited residents who have not been vaccinated from entering malls but exempted minors from the rule.

The city’s COVID-19 Operations Center issued the guidelines allowing children inside malls and similar establishments provided that they are accompanied by vaccinated adults.

“Infants can also go inside the malls and shopping centers as long as they are accompanied by their parents or adults,” COVID-19 governance cluster head Oliver Egypto said.

But lawyer Jose Edgardo Uy, chair of Cagayan de Oro’s Regulatory Compliance Board, said the city government stood pat in its decision not to allow residents who are not fully vaccinated in commercial establishments.

Uy said security guards have been instructed to require the vaccination cards of those who want to go inside.

“I suggest that you carry your vaccination cards always because these will be checked by security guards,” Uy said in the press briefing on Thursday.

“Guards will no longer check the barangay exit passes. You do not have to carry them anymore,” he said.

The “No Vax, No Entry” policy of the city government was made despite a warning from a group that it would go to court because of what it called “extreme policies.”

The group sent “cease and desist” letters to Mayor Oscar Moreno and Misamis Oriental Governor Yevgeny Emano and warned them of lawsuits if they made vaccination mandatory.

The National Inter-Agency Task Force has chosen Cagayan de Oro as one of its pilot areas for eased COVID-19 restrictions.

The City Health Office reported only six new infections on Thursday with no deaths and 502 active cases in the city’s isolation facilities. –Rappler.com